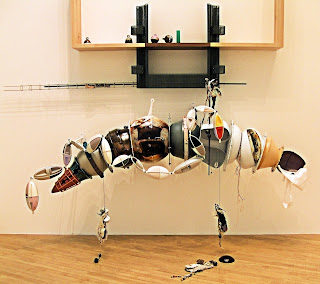 Michael Gove is one of the new Illiberal Elite who are forever moaning about the Liberal Elite who, I figure, sound very much like me. There is something clammy and unwholesome, something fungal about Gove's glossy face and his flaccid nose which speaks of childhood pickings: he looks like the sort of pants-wetting loser who routinely sucked up to teachers and received regular beatings in the playground. Needless to say, as part of the Illiberal Elite, he is reactionary and this week waded into criticising the Turner Prize winner, Helen Marten, describing her as epitomising 'The tragic emptiness of now'. Which suggests to me that he's never seen Ms Marten's remarkable, human, slightly surreal, often humorous works. She is playful, light and fun.

What this suggests to me is that Gove had someone prepare this poetic soundbite for release on the morning after the judging of the Turner Prize. The reason I say 'had someone prepare' is that this beautiful sequence of words is so far from his flabby-mouthed, blundering norm that I can't believe that it came from him. In fact, what this pre-planned "criticism" of Ms Marten and the Turner Prize in general have shown is further proof of that Britain is becoming a fascist state.

I am reminded - again - of Umberto Eco's essay, 'Eternal Fascism: Fourteen Ways of Looking at a Blackshirt' in which he writes that for the fascist:

'[...] culture is suspect insofar as it is identified with critical attitudes. Distrust of the intellectual world has always been a symptom of Ur-Fascism, from Hermann Goering's fondness for a phrase from a Hanns Johst play ("When I hear the word 'culture' I reach for my gun") to the frequent use of such expressions as "degenerate intellectuals," "eggheads," "effete snobs," and "universities are nests of reds." The official Fascist intellectuals were mainly engaged in attacking modern culture and the liberal intelligentsia for having betrayed traditional values.'

(Should anyone be interested in the trivial little driveller, Gove's full pronouncement, see this article.) 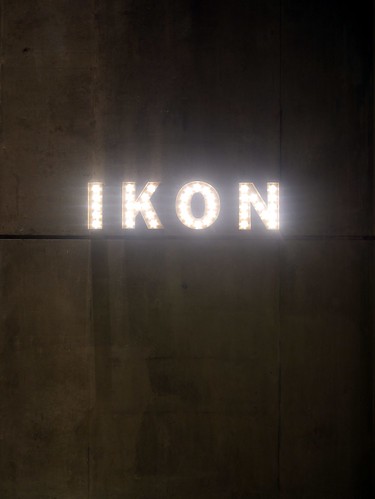 I had cause to think about these words on Wednesday night when I visited the Roger Hiorns exhibition at the IKON gallery, a real curate's egg of a show. I am going to ignore most of the first-floor gallery which was filled with paintings which I will confess to not liking and probably not understanding, paintings in latex and "brain matter" that reminded me of a late-career Matisse tackling images from Grindr.

The installation pieces upstairs, however, were incredible: most certainly a testament to the 'tragic emptiness of now'. I wasn't allowed - understandably - to photograph the main exhibition upstairs but the image from the invite to the private view will give you an idea of what it was about: 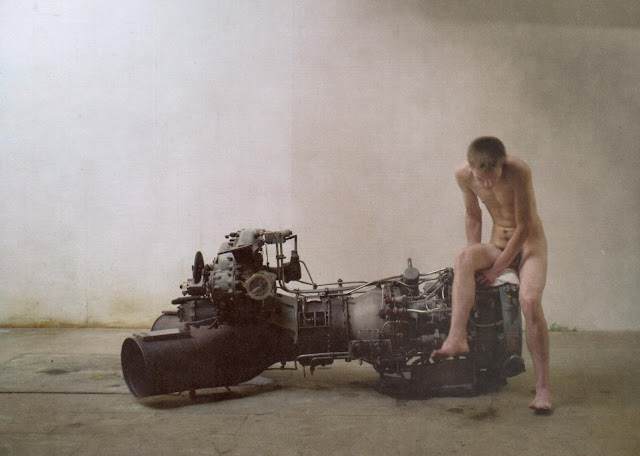 A piece for "jet engine, anti-depressants and youth" in which a live model walks about the exhibits, sitting listlessly on them or appearing to sleep next to them, this is simultaneously sublime and utterly miserable: strange half-human machines bubble away in one room, an x-ray machine is upended in another, the floor is covered in powdered anti-depressant medicine and this boy wanders about dehumanised, depersonalised, an element in a work of art. 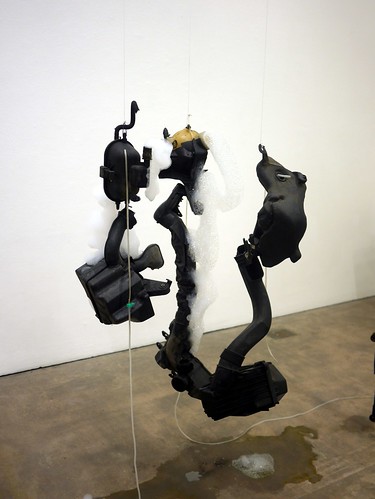 Hiorns here questions the cults of the 20th Century which have brought us to this disastrous global situation: psychoanalysis, youth, speed, travel, eternal life and the result is deeply moving.

Lighter things also happened this week, including the annual Christmas lecture at the School of Jewellery, given by Professor Richard Taylor. 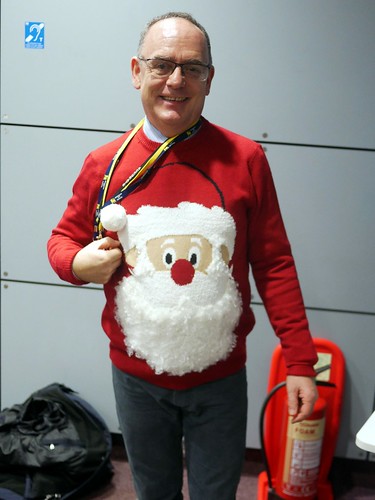 Professor Taylor posed the question of how it is possible for Santa to deliver all the presents to all the children of the world in one night: 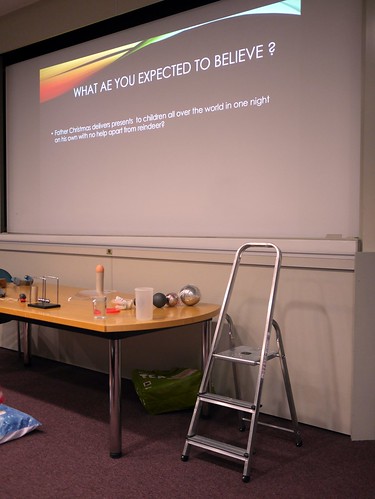 And then proceeded to give us a whistle-stop tour of physics: 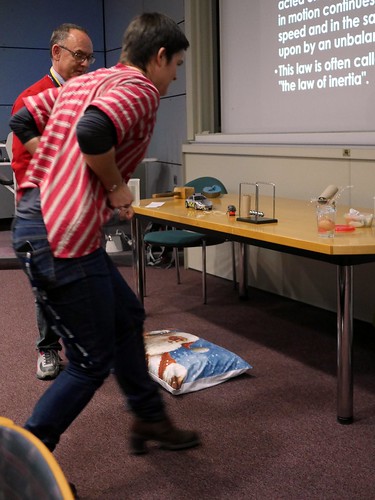 Travelling by way of Russian meteorites and the Large Hadron Collider with rather too many clips from the Dudley Moore film, "Santa Claus: The Movie" (which appears to contain a line about the quantum possibilities of the problem) he concluded that contemporary quantum physics proves that Santa CAN deliver all the presents in one night!

This was followed by a Christmas Karaoke for the staff and students. I am not the biggest fan of things Christmas and I loathe Karaoke, so left after the mince-pies has been eaten and the singing started. Not before catching our Head of School, Gaynor Andrews, and my colleague Sally Collins in some very silly hats: 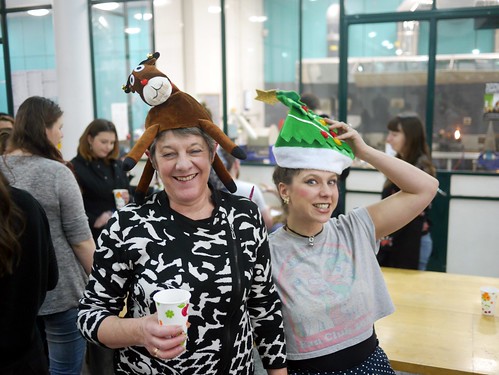 A musical end to the week with the Birmingham Contemporary Music Group playing some works from their fantastic "Sound Investment" programme, a programme which allows members of the public to sponsor the commissioning of a new piece of music from a contemporary composer. The programme was all pieces commissioned since 2000, most notably a piece from the ever impressive Gerald Barry, "Wiener Blut".

Highlight of the evening was, however the most recent commission, the brilliant "Ceci N'est pas un Concerto" by Francisco Coll, described by the composer as "surreal" and "a fake piano concertino", it is, at least in part, a concerto for piano and soprano with a hilarious and difficult sung part. This was performed brilliantly by Elizabeth Atherton. 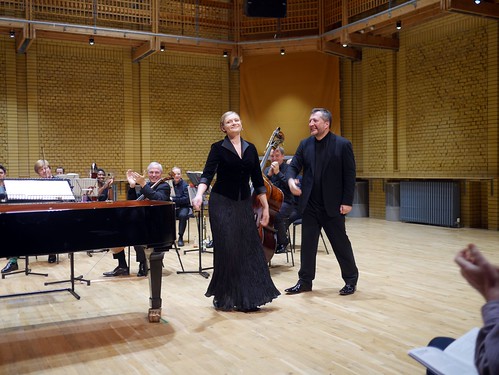 Thanks, Brigitte! I hope things aren't too grim for you. I am fairly certain that we will mostly remain in the EU, despite what the populist idiots like Farridge think: we simply cannot afford not to. That, of course, is provided your new president Putin-Trump doesn't end the world in a nuclear flash.

The unfortunate side effect of all this is that I will not be back in the US for the foreseeable future.

If can get over to Europe, let me know. It is fairly easy for me to pop over to Germany for a weekend.

Professor Taylor is not only brilliant but hilarious and exactly the sort of person we need more of in Education. His presence in the staffroom is guaranteed to reduce everyone to gales of laughter.

Yes, I only like Christmas when people buy my work and there has been a fair bit of that this year, so I cannot complain.

Ah, the holidays. Just another word for misery on so many levels. Honestly, just about right now, with 12 more days of feverish jolly and useless-gift-buying to go, I reliably turn into a misanthrope of sorts, a scrooge, which is really very unlike the real me. There's just something about December that sets my teeth on edge every year. Maybe I feel forced to do something I don't want to do or participate in. Maybe it is the afterflicker of US elections having gone haywire, with a leader elected who is lacking on all levels except hubris and coming up with a cabinet that is not exactly forward-looking. The next 4 years will be almost unbearable. With BREXIT you guys probably all felt the same way...

I loved your weekly roundup, as I always do, Dauvit. You make me smile and for that I say THANK YOU. PS: I am dying to meet Professor Taylor!