I expected to love my visit to these two exhibitions, to see gorgeous things and return inspired. Instead I have been left with a sense of ambivalence and uncertainty. The Alexander McQueen Savage Beauty exhibition at London's Victoria and Albert Museum is all a blockbuster exhibition should be. Big, bold and slightly overwhelming in it's presentation. It was truly an experience and particularly in the case of the Cabinet of Curiosities section awe inspiring. I should love Alexander McQueen's work, it is dramatic and fantastic, colourful and unsettling. The tailoring incredible and beautiful, the use of materials and textures fabulous and I do love his work up to a point.

The opening quotes in the exhibition spoke of McQueen's desire to empower those women he dressed, make them awe inspiring and scary. The clothes he designed were just that but what ever shape,colour, material or inspiration he used under every ensemble was the inescapable stick figure of the fashion model. Display after display there was the same homogenous female body. The male body was entirely absent, where was his menswear? The male body has seemingly been banished from his cannon of work.

There was much talk of his undeniable skill in tailoring and taking the shape of the body into account in all his designs, he was quoted as saying he designs from side, the worst side for curves to ensure an all round interesting silhouette but again he was only using one homogenous female form. For all the talk of crossing boundaries this one seemed to be one he could not even see, his work was entirely unable to break the bounds of fashion model's tall thin body.

The only hint things are otherwise was his Voss collection where writer Michelle Olley posed as the death of fashion, which is apparently a fat woman with no clothes on. I was pretty insulted by all the assumptions surrounding that show piece. Her body was the only hint that any other kind of woman (or indeed any other kind of body) could exist outside the fashion model “norm”. Yes I know that was kind of the point and one of McQueen's fascinations was the "other" body but in the forrest of identical mannequins it just came across as crass. I was disappointed that this was the impression the exhibition had formed on me, I wanted to be taken in and marvel at the genius we were being told he was.

I also began to get the impression I was stuck in a visual Radiohead album, relentlessly serious with no humour whatsoever. Even Shakespeare tragedies have some light relief, there was nothing light here, fashion is a very serious business and Alexander McQueen took himself and his work very seriously. I am always dubious of anything that cannot laugh at itself occasionally, it lacks something essentially human and fails to fully connect and communicate. I could not help but wonder about comparing his timeline with that of another towering figure of British fashion, Vivian Westwood. His work remains distant, trapped in an impressive bubble, billowing and gorgeous like his Pepper's Ghost illusion of Kate Moss but ultimately untouchable and uncommunicative.

Perhaps it was my mood after visiting the Alexander McQueen exhibition or walking past those beautiful but unoccupied mansions bought as investments by rich foreigners in the streets between Kensington Gore and Sloane Square, or the recent election result but the Craft Council's lavish presentation of contemporary craft at the Saatchi Gallery Collect 2015 was problematic too. This is a festival of the most fabulous objects presented by the worlds best contemporary craft galleries. It is billed as a place to see and buy museum quality contemporary craft. The quality of the work on show was undeniably excellent and evidence of museums purchasing was clear in little cards denoting which pieces had been bought by what museum with what funding. Private individuals making purchases were also in evidence. Again, I wanted to be affected by what I saw, I wanted to be moved by the beautiful aesthetic of the work on show. I was but again only up to a point. Highlights for me were the Cynthia Corbett Gallery with Chris Antemann's £82,000 worth of truly taste free, baroque Lemon Chandelier and Jo Taylor's elegant flowing blue porcelain. There was also drawers full of Anna Heindl's Farbkorper jewellery collection (image below) at Gallerie Sofie Lachaert. Tord Boontje's Chairy Tales was an interesting and enjoyable exercise in narrative sitting apparatus or maybe you could call them personality perches. 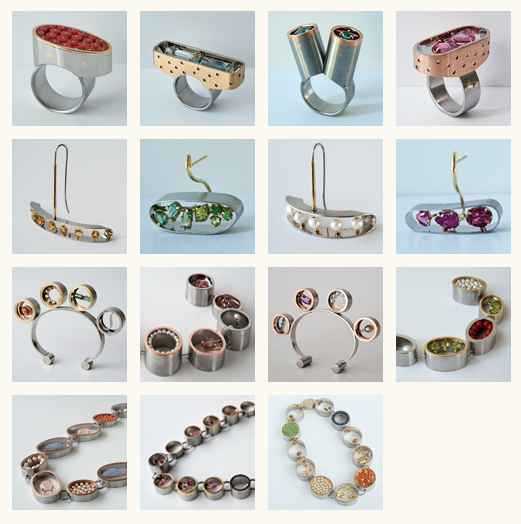 However, many of the galleries seemed to be showing exactly the same things they had 2014. I walked past several of the same objects or artists who were in exactly the same places as they were last year! It was as if the show had been wheeled away last year and wheeled out again this year. The lack of context given to the works was also irritating, beautiful objects stranded in a no-mans land of arty blankness some galleries had not even marked who the pieces were by. There were several galleries new to the show and new artists marked but they were all seemed to be very small works. Given this is the Craft Council's flagship event and that a ticket to Collect was about the same price as a ticket to the McQueen exhibition (£17) I felt they could have all tried harder to be more cutting edge and up to date. As it was the repetition from last year gave a stale and stranded sort of deja-vu feel to the whole affair. Last year I left Collect feeling motivated and inspired this year I felt it was static and disconnected. It left me questioning how all these objects had become so disconnected from the fervent creative drives that created them. They all felt like they were destined for those beautiful empty mansions I had walked by to get there. Context is everything and the way Collect is presented made me feel like craft was adrift in an impersonal space. 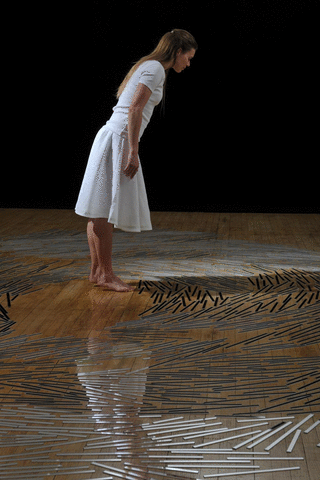 Perhaps I should have stopped to see the Caroline Broadhead/Angela Woodhouse dance piece “Sighted”aiming to give an experience context to craft through exploring ways of looking but the notice requesting the audience to stand for the 20 minute silent dance piece put me off, that and the silent part.

Both shows were fabulous, don't get me wrong, I enjoyed them with a good friend who also loves to “enjoy the aesthetic” as she describes it. With both shows I expected to have my disbelief suspended, I expected to be taken in to the worlds of wonder that both McQueen's work and the contemporary objects at Collect promised. I wasn't, the scenery kept intruding and the actors were wooden.

Thanks Brigitte for your encouragement, I felt I needed to write the review as I felt strongly but I did not want to just be hugely negative, because it wasn't a negative experience. In fact my strength of feeling about both exhibitions shows the extent to which my preconceptions on several levels were challenged. McQueen was a huge creative talent with vision and the work at Collect was stunning but the whole day left me feeling very ambivalent about what I had seen.  Perhaps the man who said he would rather people vomited after his shows would not have seen it as a bad thing?

Thank you for your review, very interesting. I like that you gave your unvarnished opinion in a respectful and considered voice, very well done! I hope you will do more blog posts like these in the future.