Has any of your works ever been stolen ?

This is big news here: Unfortunately 5 major artworks were stolen from a Paris museum. I am outraged. I feel like they have been stolen from me personally. How can this happen in a time when all kinds of security measures are taken everywhere ? And what do the thieves do with the work ? I hope it gets recovered eventually.

Has any of your works ever been stolen ? What did you do to prevent it, and where did it happen ? Someone stole a dress from me once, the model just kept the dress and left with it, and in the hectic surrounding the fast-speed off and on activity behind the runway, I only noticed when it was too late. Naturally, the theft was denied... what could I do ?

Five paintings by Picasso, Matisse and other great artists have been stolen from the Museum of Modern Art in Paris, French officials say.

They were taken overnight on Wednesday and reported missing early on Thursday, officials say.

The museum, across the River Seine from the Eiffel Tower, has been cordoned off by investigators. 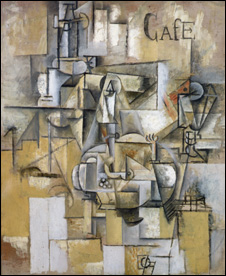 Security camera footage reportedly shows someone entering the museum through a window during the night.

"This is a serious crime to the heritage of humanity," Christophe Girard, deputy culture secretary at the Paris Town Hall, told a news conference.

The theft was committed by "one or more individuals who were obviously organised", Mr Girard said.

He added that investigators were looking into how the museum's security system and several guards were outsmarted by the thief or thieves.

The five missing paintings are Dove with Green Peas by Pablo Picasso (painted in 1911), Pastoral by Henri Matisse (1906), Olive Tree near l'Estaque by Georges Braque (1906), Woman with Fan by Amedeo Modigliani (1919) and Still Life with Candlestick by Fernand Leger (1922).

Museum officials discovered the theft early on Thursday, when they found a smashed window and a broken padlock which had been cut to gain access to the five paintings.

It is still unclear why the alarm systems did not alert staff earlier, reports the BBC's David Chazan in Paris.

There has not been anything comparable since the 1990 theft at the Isabella Stewart Gardner Museum in Boston of a Vermeer, several Rembrandts, Degas and other masterpieces, says BBC Arts Correspondent David Sillito.

None of these works has yet been recovered.

Though there is often speculation that works have been "stolen to order" for dishonest collectors, experts in the field say that in reality this is virtually unheard of.

Investigators think that international criminal gangs use art works effectively as a form of currency; if you're dealing in drugs and weapons, a rolled up painting is a very good way of carrying very large amounts of "currency" around, even if it is one tenth of the value that it would be if it was at auction, our arts correspondent adds.

The Museum of Modern Art of the City of Paris, located in the east wing of the Palais de Tokyo building, is separate from the bigger and better-known national collection of modern art at the Pompidou Centre.

Comment by 2Roses on May 22, 2010 at 1:26am
Years ago we had a number of pieces in a very prestigious gallery in Newport Beach California. We had been dealing with the owners for several years and knew them quite well. Everything had always gone smoothly and the relationship was very cordial. Imagine our surprise when we dropped by the gallery one Saturday afternoon to find a completely empty storefront. This was nothing compared to our shock when we drove over to their home and found the same thing - empty.

We immediately contacted all of the other artists we knew that the gallery represented. Did anyone know anything? Had anyone heard anything? It was a complete mystery to everyone. The couple had vanished and taken all the goods with them. Weeks went by and we were calling every contact we knew trying to track the couple down.

Finally, someone remembered that the couple had mentioned a home they owned in Kansas City. We had a cousin who lived in Kansas City. A few more phone calls and a couple of days later we had an address. Now, we were seriously torqued about getting ripped off, but we were even more pissed about being betrayed by people who we thought were our friends.

We got in the car and drove to Kansas City.

Waiting for us there was our cousin Pat. Cousin Pat is the kind of person who would qualify as the black sheep of just about any family. "Thug" is the usual descriptor people mention when talking about Pat. Anyway, we piled Cousin Pat in the car, along with few of his helpers for good measure, and drove over to see our old friends - about 10 o'clock at night. It was worth the drive to Kansas City just to see the look on our old friend's faces when they opened the door. They just stood there, dumbfounded, looking at us and Cousin Pat and Pat's friends, and you could read on their faces all of horrible scenarios they imagined were about to unfold.

What actually did happen was that we spotted our stuff sitting on a table just inside the door. We smiled and asked if we could have our things back. They graciously replied "sure, its all right here". We took our things and left without another word spoken by anyone. All seemed right in Kansas City.

A major craft organization and museum in my state has an annual juried exhibition every year. This exhibition traveled, and at the first exhibition stop they were stolen. Apparently they were covered, but the cover was not secured. I did not find out about the theft until the museum called to notify me they were stolen.

The first exhibition venue shipped the empty box to the museum and never contacted me about the theft. The museum that was the second venue and didn't contact me until 3 days before the exhibition was scheduled to open.

Obviously I couldn't prevent the theft, and both institutions were trying to deflect blame to each other. Needless to say I will never deal with this organization again after I saw how they handled things. The exhibition contract I mailed was never "received", and I ended up getting an insurance settlement for much less than the insured value of the rings. What did I learn from this experience? Always have proof of delivery of exhibition paperwork, and be prepared for the possibility of the artwork to never return.