Dear marketing people – please stop appropriating the word CRAFT for everything. We’ve had crafted cars, coffee and crisps and now crafted cannabis has been coined. This has to stop. "Crafted cannabis - an artisanal weed experience"? Enough already.

....."The duo at Brooklyn Holding Company believe that Portland deserves an artisanal weed experience. They plan to control every step of marijuana production, from seed to sale, in order to maintain a premium reputation.

-- As always, feel free to comment but keep it family friendly. 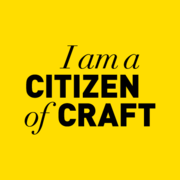 Ah, grassroots. I agree, probably the best way to go.

You have probably seen this already: An interesting and commendable grassroots effort was initiated at the beginning of this year by the Canadian Crafts Federation / Fédération canadienne des métiers d'art: Craft Year 2015.

They started a website complete with fb / twitter accounts and all the usual bells and whistles. This is from their website. Not bad. Not bad at all:

"Craft Year is a year-long, nation-wide festival aimed at promoting craft as a key player in Canadian Culture. The type of events we are looking for can include craft exhibitions, fairs, book launches, open houses, conferences, workshops, competitions, publications, community events and more. All events registered for Craft Year 2015 will be displayed here on our website for the whole world to see.

In the first launch of Craft Year in 2007 over 700 events took place, deeming it as an international hit. This lead to an expanded high profile of activity such as the invitation to Canada as the special guest country at the 2009 Cheongju International Craft Biennale in Cheongju, South Korea.

There are two ways in which to participate: you can re-brand your already planned events for 2015 with the Craft Year logo, which can be found below, or you can take the initiative to help us set the stage for craft in Canada by creating new activities/events designed specifically for Craft Year, or you could do both.

"Working on the wheel? Rocking a ring? Gazing at glazes in the Gallery? No matter where you are or what you're up to, when it comes to craft - we want to see what you see! Share your shots with us on #craftselfie Saturdays.

Every Saturday throughout Craft Year 2015, we encourage you to post your selfies with craft. Whether you're a maker or a picture taker, post your pic from studios, galleries, boutiques, museums, even from your own collections, wherever you engage with craft!

Brigitte, as usual, you balance my bombastic style with pragmatism. I did acknowledge ACC for trying, it was the resulting plan from the consultants I was referring to as misguided. I should have been clearer.

I'll put on my pragmatic hat as well, because that is what marketers do. We never have a perfect environment to work with and always have to get the best results playing the cards we have.

You have astutely pointed out that the primary obstacle to any kind of branding effort is existential. That many in this field simply haven't realized or come to grips with the idea of branding in the first place. This is amusingly ironic since "raising awareness" is the universal panacea espoused by many in the craft world.

I would suggest that this discussion is best had in art schools, and I think in many curricula it now is. So it is just a matter of time before these ideas branding and taking ownership of managing the public perception of craft become widely held. The overarching trend of social media is accelerating the process. This part of the equation is solving itself right before our very eyes.

The second obstacle you mention is the notion that the field of craft has to speak with one voice. This is a top-down approach that calls for finding one universal message that fits all. Being good pragmatists, we know that is not likely. So why make this an impediment at all? I suggest that a bottom-up approach is a more practical solution on every count you mention.

"Grassroots" is another term for this.  Just as crowd-sourcing has turned the world of capitalization on its head, a grassroots approach could do the same for craft.

This approach frees the major organizations to be facilitators and "cheerleaders" rather than financiers. A role they are well suited to play. As with most things, timing is everything, and the time has never been better to leverage social media in this effort.

The discussion started with the lament that yet one more unrelated business was misappropriating the meaning of craft to elevate its product/service.  This is an effective strategy in part because there is no rebuttal. Social media is the ideal platform for encouraging that rebuttal and raising awareness at the same time.

The second, and most crucial part of this, is weight of numbers. The corporate interests have money to throw at the effort to get their "craft" message heard. We have a chorus of voices. It does not matter if we sing with one voice. Being louder and more persistent than the opponent is what wins in the long run.

Comment by Brigitte Martin on August 22, 2015 at 8:20am
I can't even begin to describe the difficulties around gathering a cohesive, let alone agreed-upon, opinion about the 'brand of craft' amongst the creatives of one craft field. Now multiply that with x number of fields and you have as many opinions as there are people in the room. Just talking about craft and bringing the word 'brand' into the conversation at the same time, in other words asking people from different ends of the making spectrum and their organizations to realize that this is how you need to think, was revolutionary and met with hesitation bordering on resentment. Getting over the thought of craft as a brand was hurdle no. 1, followed by hurdle no. 2 defining what 'craft' actually is. You have to agree upon what values you want to tout in order to market anything. Craft has a different and sometimes opposite (!) meaning for everyone, running the gamut from pasta necklaces to abstract glass sculpture. With a field and opinions so diverse how can you distill all those approaches and identities into a few unifying statements and do justice to not all but at least most? This would have to happen in order for a top-down approach being accepted by the majority of constituents.

I hate to disagree with you 2Roses, but I don't think it was a misguided effort at all to bring the craft groups together with a branding/marketing expert and start talking about this (and THANKS to the ACC for footing the bill), even if no marketing campaign a la 'milk mustache' came out of the convening. At least so far. At least it was a start.

I am not going to get into your comment about various organizations being 'pompous, bloated and ineffective', you know as well as I do that this is really not the case, so please, let's leave such assertions out of our future discussions here on crafthaus. Let's focus instead on what, if anything, can be done and the practicality of doing it. Cohesiveness of approach, hundreds of thousands of dollars spent for a branding/marketing campaign - who is going to put their own work aside for a good long time, spearhead all that, do the lobbying, find the money if there is no actual 'message' even the people in our field can agree upon? Oh, and of course, whoever does all that work wants to eventually get paid enough to make it worth their efforts. Everyone has an opinion, the actual DOING is the hard part and, in this case, a herculean task.

I like results as much as you do, 2Roses. Baby steps are better than no steps at all and, like with most things one attempts to do for an incohesive group: Damned if you do, damned if you don't.

As a marketing AND craft person I have spoken to this point for years. This theft did not happen overnight. It's been decades in the making. While automakers, brewers, fast food purveyors and an army of other interlopers steadily sucked all value and meaning from "craft", we all sat on the sidelines entangled in endless academic arguments dissecting the minutiae of this or that.

So who is to blame here. The thief who stole our business, or us for not minding our business in the first place?  More importantly, what are we going to do about it? Now, here is where our pompous, bloated and largely ineffectual organizations like ACC, SNAG, NCECA (not to single them out, there are many, many more)  could actually come together and spearhead an organized effort. But they won't.

ACC attempted to address the issue of branding several years ago in a wildly misguided, expensive and failed effort. I give Chris Amundsen points for at least trying to do something. Crafthaus was there too, and put all of its weight and vision into trying to organize all of the other major craft organizations into a unified effort. A lot of lip service was paid and nothing was done.

Commenting on the proposed "branding plan" at the time, I told Chris and Brigitte, "2 years from now, we will have spent a lot of money, nothing will have been accomplished and we will be having this same discussion." I hate to say I told you so, but here we are.