How could I forget?
In my last post, I completely forgot to note that I'd also taken a trip to the New Ashgate Gallery in Farnham for the opening of the ACJ "Choice!" show there on the Friday night. This is the 2016 edition of the annual show of work by members and we were delighted when the trustees of the New Ashgate invited us to show it there. 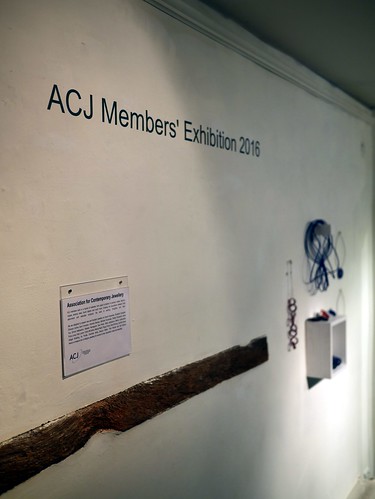 The gallery is one of the major craft galleries in the country and exhibits a number of well-known makers and is a hugely popular cultural hub in the town. 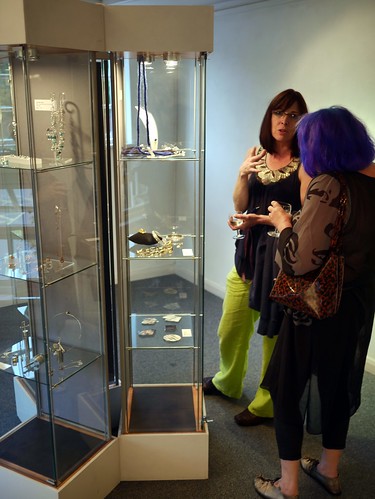 Our annual shows are only open to the members and they are juried. One of the brilliant things about the ACJ shows is that they are incredibly varied, reflecting the range of practice within the Association.

It was great to meet with some of the members there, especially with Amanda Denison, who makes some wonderful enamel works: 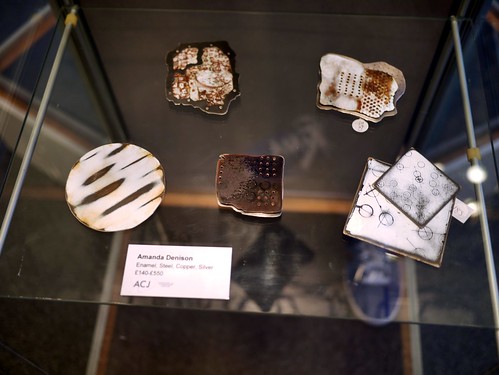 Also working in enamel - but in a very different way - is Su Trindle: 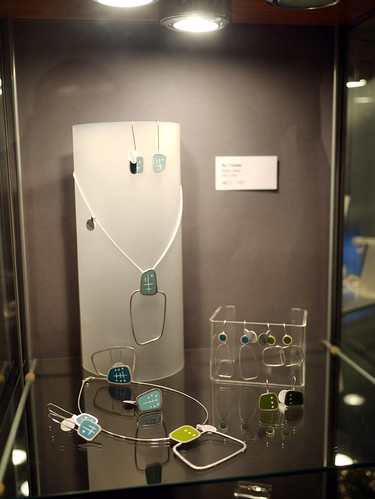 I've been a fan of Su's work for years and I really enjoy her classically "modernist" work which wouldn't have been out of place at the Festival of Britain!
Poppy Porter surprised me with her colourless "Synaesthesic" rings (she designs these to the shapes she sees when she listens to music): 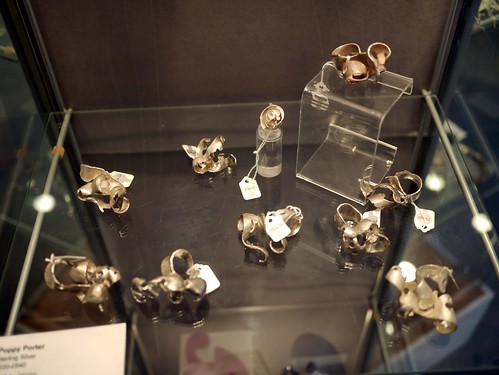 Her work is normally brightly coloured.

Needless to say, my own work is represented in the show, too. I put in a selection of bracelets made using my new "improvisatory" approach to the materials: 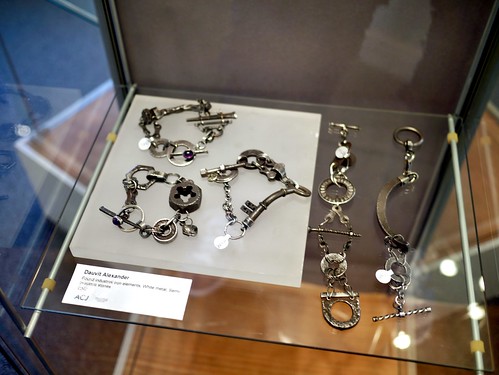 And it was good to see that we had work from one of the members to whom we awarded a research grant, Mirka Janeckova: 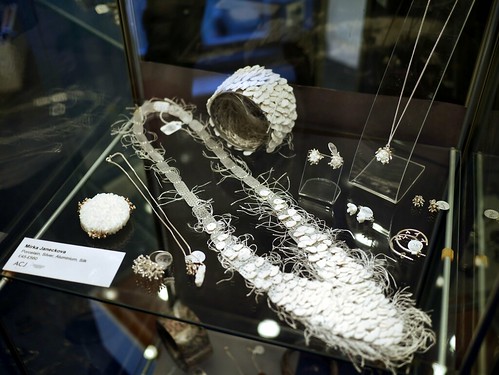 An excellent show which runs until 5th November.

Tuesday night saw me back at the Birmingham and Midland Institute for a brilliant talk from the witty and knowledgeable David Williams about the history of gunsmithing in Birmingham. 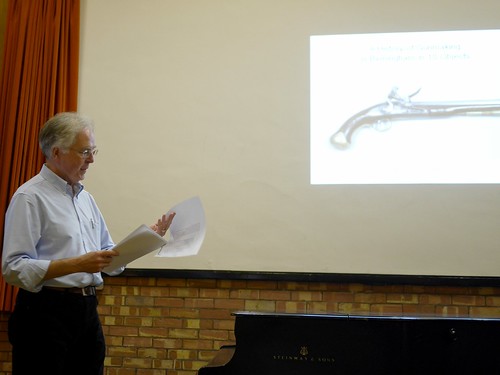 I now really want to go and visit the Proof House in the city!

Thursday night, it was off to the Royal Birmingham Society of Artists for their "Next Wave" show, in which my colleague, Anna Lorenz, had some work, an interesting crossover from her jewellery into a conceptual/installation piece. 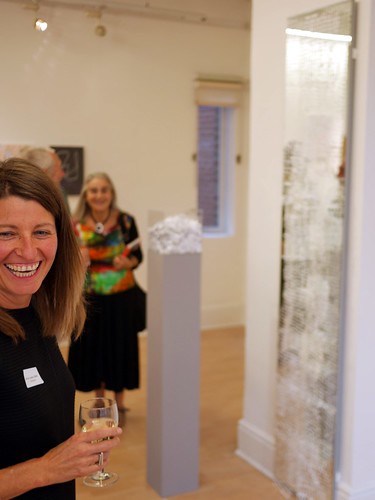 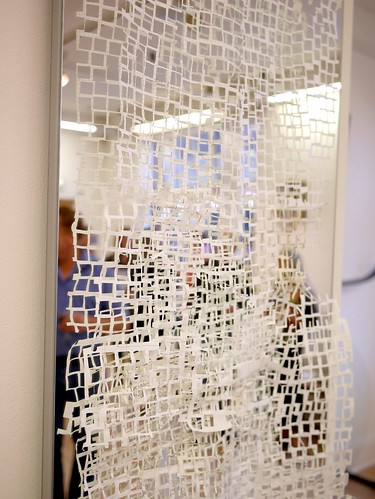 Needless to say, the School of Jewellery staff turned out en masse! 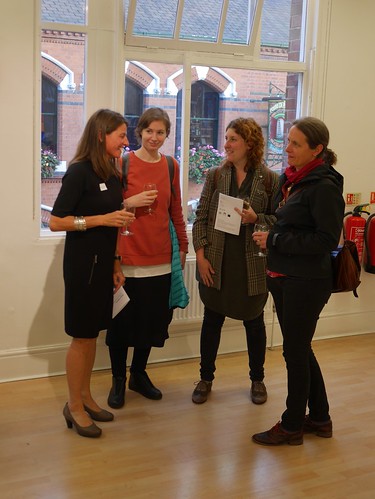 Overall, a strong show, with a couple of superb exhibits - I especially liked some "magnifying glass" drawings by Caroline Ali and the plaster and wood installations by Claire Hickey (visible in the photograph below). 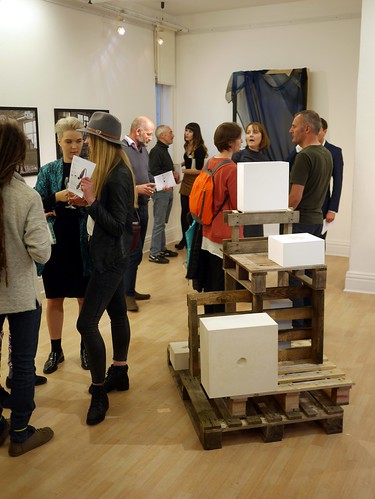 Off to Plymouth on Saturday to the opening of the exhibition of work by the staff at both the School of Jewellery and Plymouth College of Art, being held at the Victoria Sewart gallery in the city. The opening was part of a larger arts festival in Plymouth which included the Ocean Studios complex which houses the workshop of Rachel Darbourne. I met Rachel last year when she was helping to run the "Junk" performance at the school and it was a pleasure to catch up with her and to discover that "Junk" still operates on a certain level in her studio! 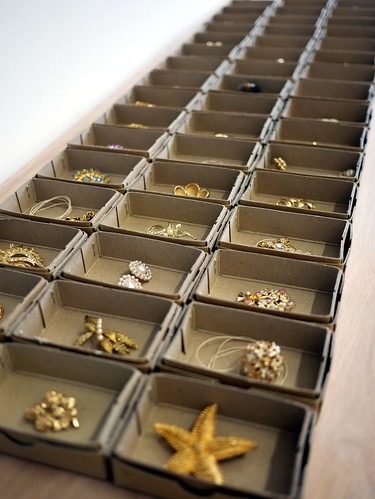 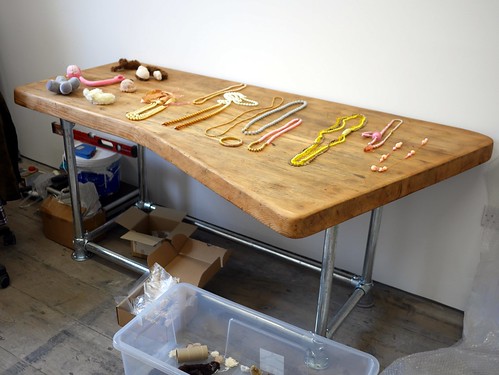 She had told me to park in the car-park behind her studio, which is at "Devil's Point" and said that it had some spectacular views. I can't disagree:

Best viewed large! Click on the image to see full-size.

After visiting here, it was off to Flameworks where Rachel's partner, Noah Taylor has a studio. I could have spent all day there...! 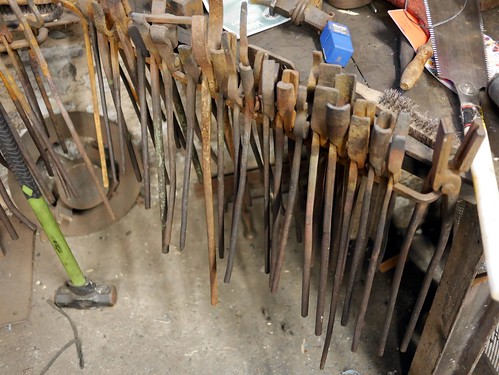 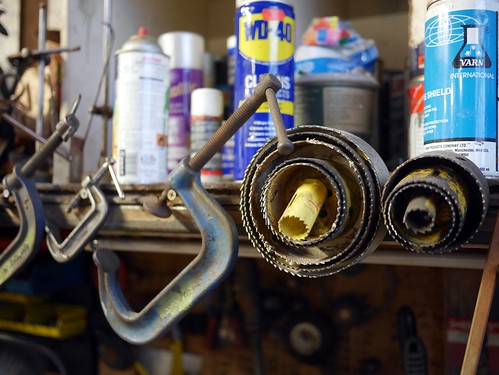 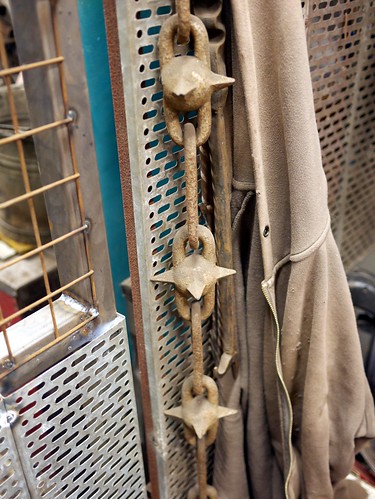 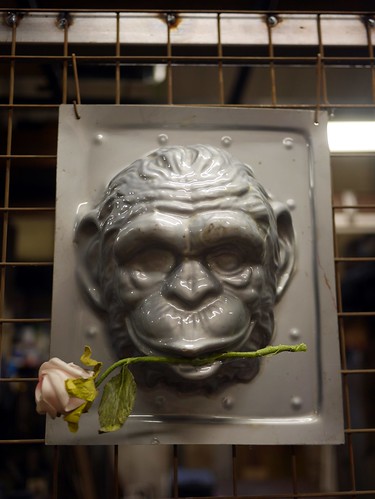 After this, it was off to the gallery. 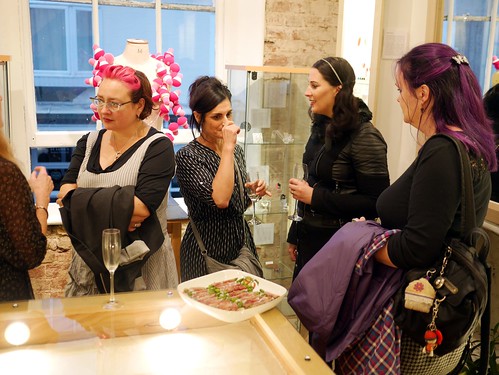 This exhibition was organised by Zoe Robertson from the School and Vicky from the gallery and it really pointed up a lot of the connections between the School of Jewellery in Birmingham and Plymouth College of Art with staff and students regularly moving between the two. It was also really nice to see the range of work presented by the staff: one is aware that the staff have a huge range of talents but it is not until something like this where that range is pointed out.

My own piece was one from two years ago, "20000 Leagues Under The Seas", displayed amazingly in the middle of the room: 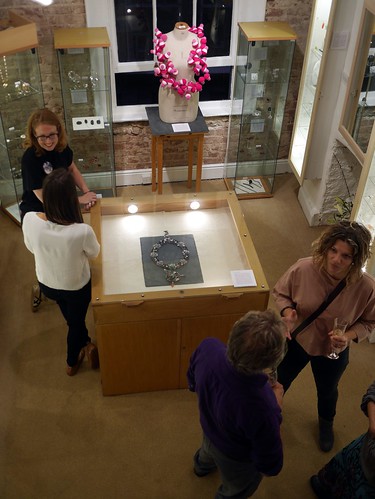 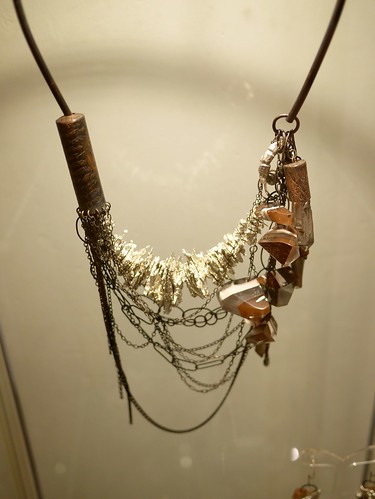 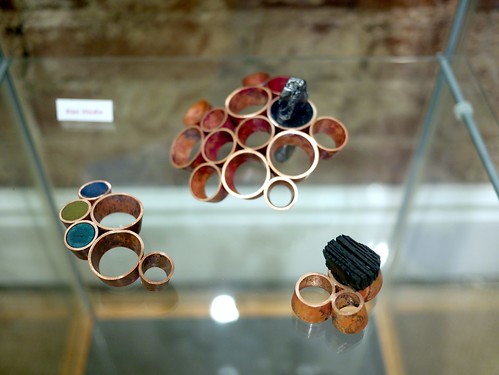 The drawing theme continued with Rachael Colley showing some brushes she had made: 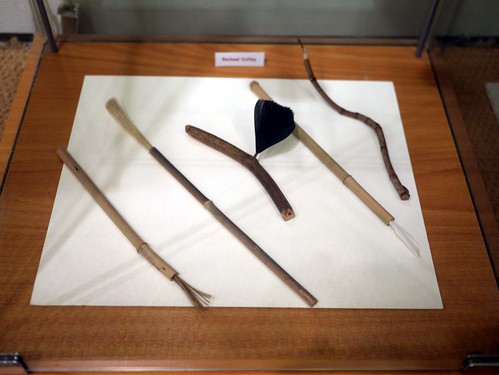 Alongside some brooches which not only show a sensitive approach to colour but which also explore unusual materials, including pressed beef! 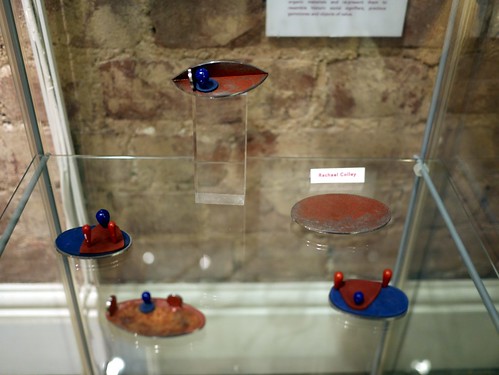 Jo Pond put in some of her new work: 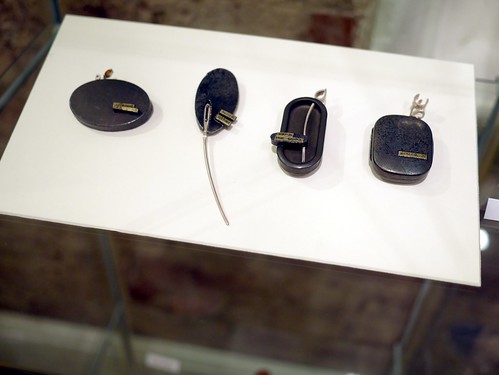 And Claire Price showed some of her digital work: 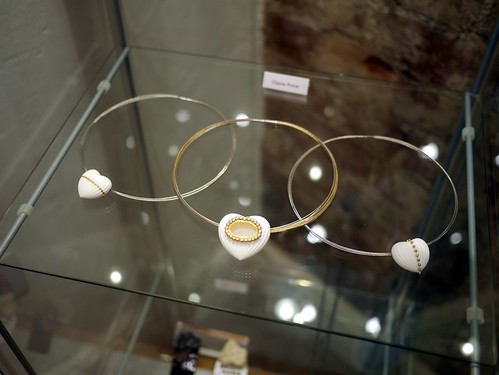 And Andy Howard's comically pornographic pieces - not shown here, not out of prudery but because I couldn't get a good shot of them -  attracted much comment.
Needless to say, this is just a few of the exhibits and almost every member of staff took part.

The event was busy and I am particularly glad that I took the time to go down and meet with Vicky and her customers and look forward to the show returning to Birmingham in the spring of next year, when it will be augmented by additional works from all the staff.

How wonderful to know that you are a member in the US! I am a member of SNAG too and I wish we had more cross-over members. Are you going to be entering our next "20:20" exhibition?

thank you for posting this dauvit!!  i just joined ACJ this past week and i was excited to see the work featured in "choice".  i am excited to be a new member, despite being here in the u.s.!