Unfortunately, I was 'triggered' this week, even within my 'safe space' of bed. Frankly, it is my own fault: I've been watching the fantastic Ridley Scott version of Philip K. Dick's "The Man in the High Castle", a book I've loved since I read it in my adolescent years (in part, because one of the heroes is a jeweller: a rarity in fiction!). In short, I had a nightmare in which I was forced to design a banner for a Donald Trump rally. The dream was very vivid and I felt compelled to create the banner in Inkscape when I awoke: 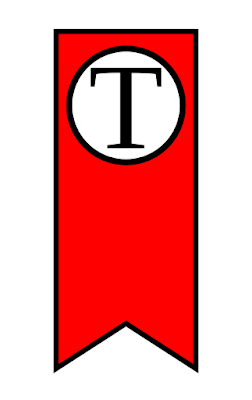 Now, this is not any work of genius, but it ties in with the Ridley Scott vision and also rather nicely with fellow-jeweller and Liberal Elite, William Aarons who, a few weeks ago, came up with this exceptionally well-considered graphic:

The fascinating thing about this final "⊥" is that it is also the logic symbol for 'falsisty'. William writes, "This symbol means 'contradiction' (unconditionally false in math[s])". I took his symbol - the 'uptack' in Unicode - and applied it to my nightmare banner: 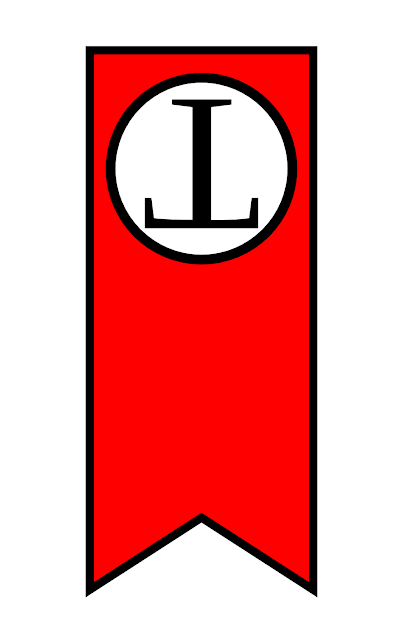 Much improved!
Anyway, I think that William's concept is strong and he has generously - rightly - made it available in the public domain. You can download and use the work freely in opposition to Trump from his website or you can buy ready made buttons and stickers from his Etsy Shop.

I would very much like to see the 'uptack' come to be seen as a symbol of resistance to right-wing nonsense everywhere and will be working on a "BREXI⊥" version for the Unite for Europe rally in London in March.

Another quick pop-up project for the Level 5 BA Jewellery students this week, this time making collaborative pieces for performance. I didn't manage to get to any of the performances but the presented work is interesting, as usual: 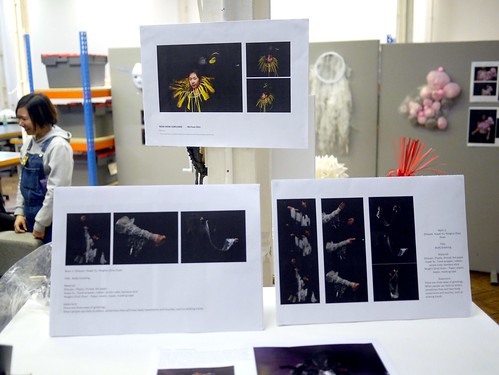 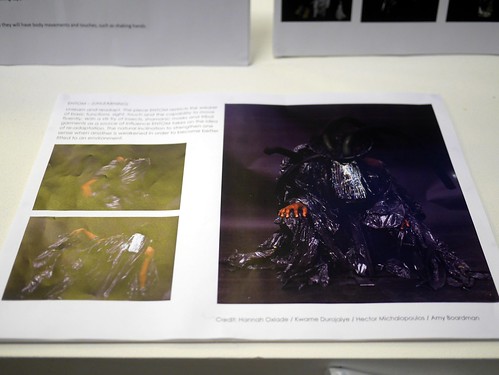 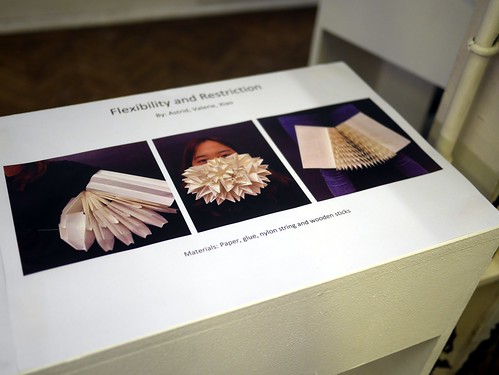 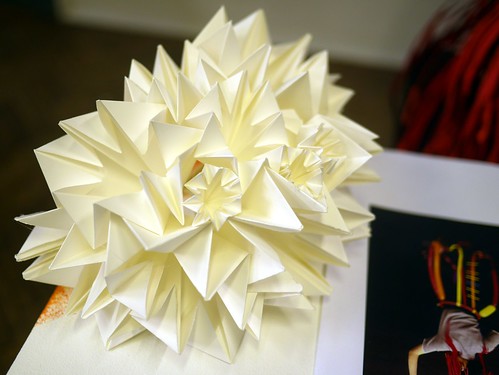 One of the great things about people knowing that I work with found objects is that I get given all manner of random things. I was clearing up my bench this week and remembered that Tina Francis had dug deep into her handbag at a gallery opening some time back to give me this: 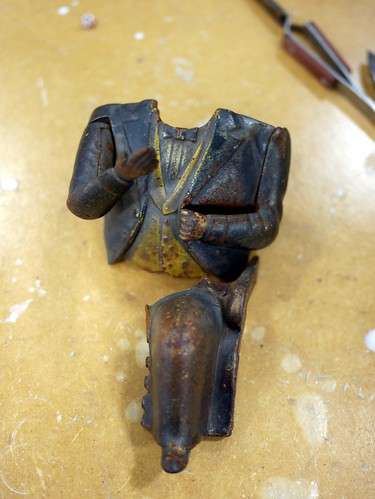 It is obviously part of an animated coin-bank and I'll need to think carefully about what to do with it.

Just before Christmas, I was also given a bag of the flat tops off of those old-fashioned signet rings which are not so popular nowadays: onyx or haematite carved with a Spartan's head; bloodstone; onyx inlaid with gold or set with a tiny diamond... I wasn't really sure what to do with them as they are not especially interesting on their own but it just hit me this week that they are rather good when put together and as Cursley & Bond had asked me to re-stock them with earrings, I couldn't resist laying them out and playing with combinations: 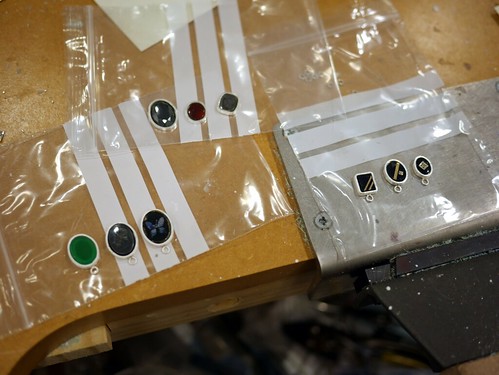 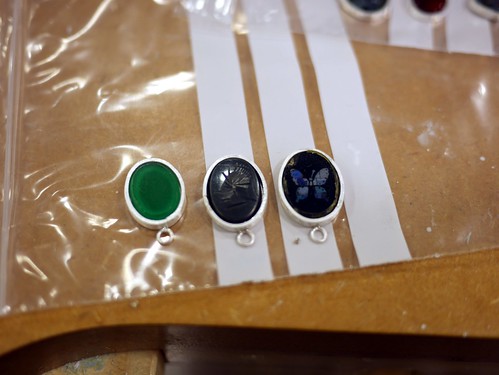 Also on the bench this week, my reconfigured health-and-safety conscious piece for the handling collection at The Herbert as part of the "Made in the Middle" show. You may recall that someone complained that the nail was too sharp, so I replaced the potential dagger with a potential blunt instrument: 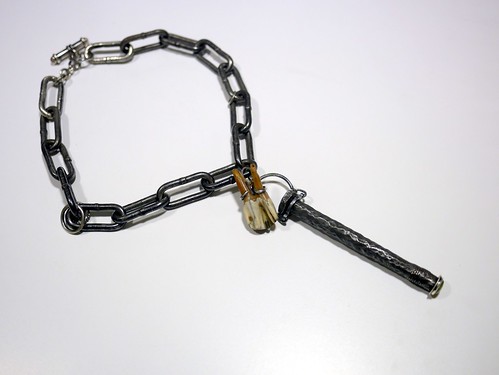 I think it loses some of the poetry of the dialogue between the blunt deer's tooth and the pointed nail but it still gives an idea of what the work is about.

The nail, of course, became a pendant: 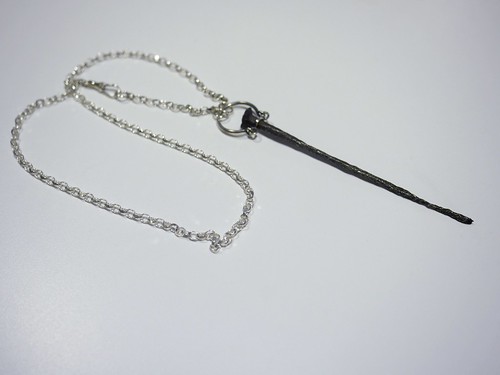 Which can nestle in any tender bosom without risk of damage.

I also finally got round to making the piece for my colleague, Jo Pond, who gave me the corroded iron staple from which it is made: 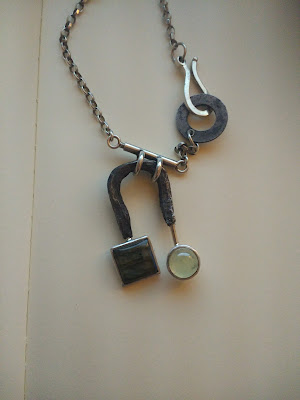 I love that it has a very early-60s vibe to it.

Back at The Herbert this week for a second workshop, this time one on using found objects to make jewellery. We concentrated on tab-settings and making constructed cages and, much to  my surprise, a friend of old from my university days turned up with her partner to take the workshop! 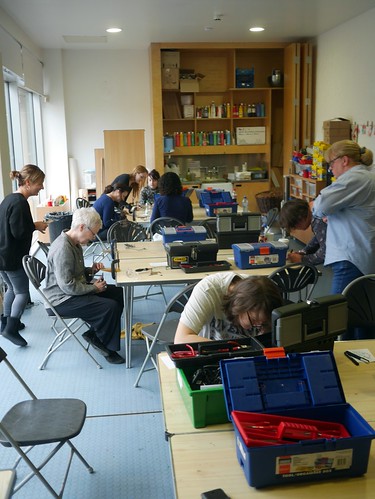 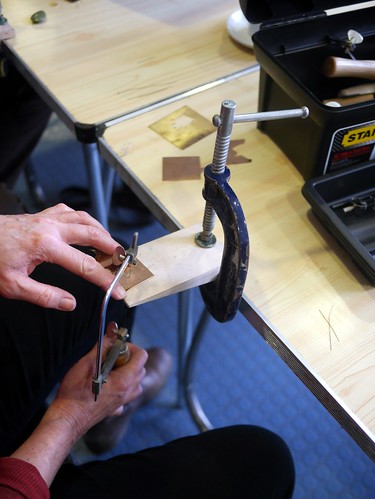 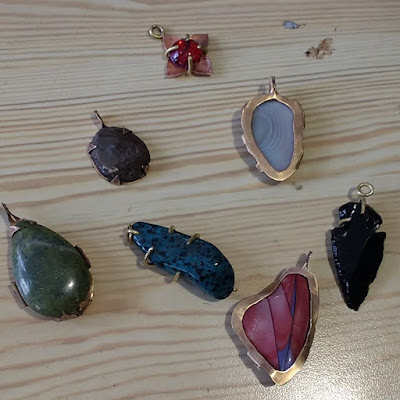 As my little end features on music seem to be popular, here is another gem I found. My absolute favourite song by The Smiths is "The Queen is Dead". I was transported back to my early 20s this morning when I discovered that it had a video by Derek Jarman...

Enjoy. It is worth going to the YouTube version to read the comments - for once they are really interesting.

I saw that, thanks!

Interesting how you rework your designs if and when asked. With respect to reworking you may want to take a look at Jason' Stein's post from today http://crafthaus.ning.com/profiles/blogs/reworking-and-revisiting-w...

A potpourri of interestingness this week, Dauvit. Love the symbolism behind William Aarons' Resist design. Thanks for sharing.