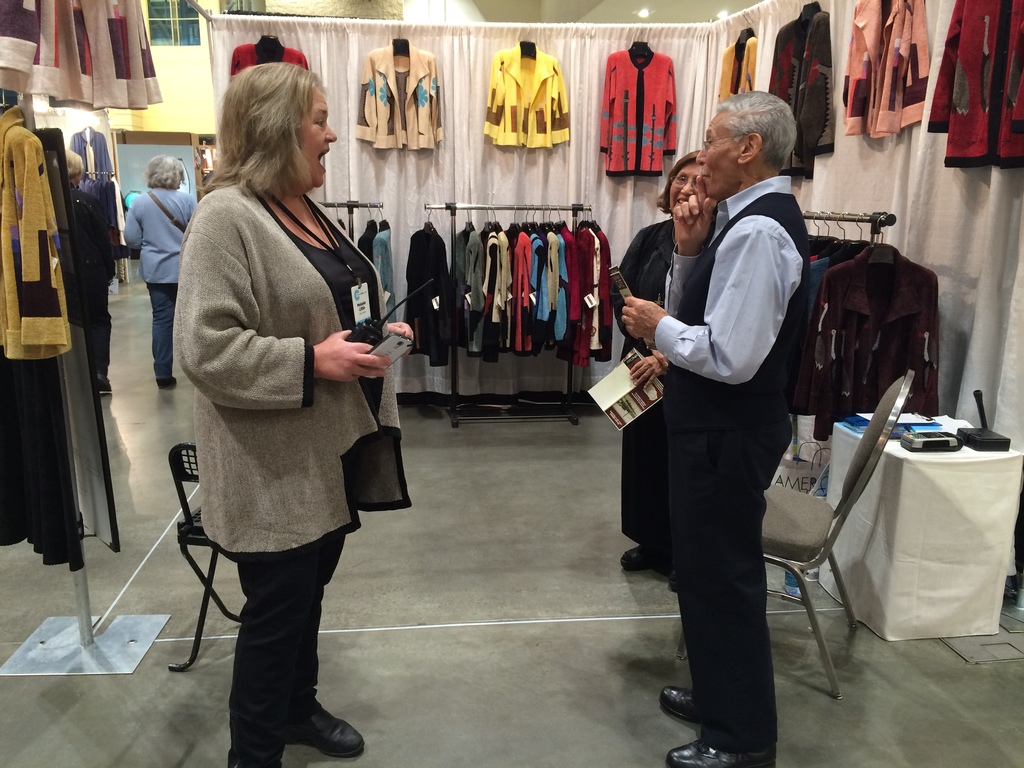 Melanie reacting to one of her artist's comments at the 2016 ACC show in St. Paul. Photo: B. Martin for crafthaus.

Crafthaus:  What was the average attendance number for Baltimore over the past years?

Melanie Little:  We average around twenty thousand visitors for the retail show segment, over three days.

Crafthaus: What is the demographic of your average customer, the buying audience?

Melanie Little:  The average person attending is probably in the forty to fifty year-old range and possibly even a little bit older than that. We really are working hard to reach out to a younger generation.

Crafthaus:  The forty to fifty years range is the age range when people actually may have a little money to spend on things. I assume most of the visitors are female?

Make Room, Modern Design Meets Craft: WEST. The room designer is Drew Beson (besonart.com) pictured sitting in his chair. Drew is a fine artist who found he has a knack for interior design. The painting in the back is his. Photos: Brigitte Martin for crafthaus.

Melanie Little:  For Baltimore the on-site fee is $16, you can go online and get a ticket for $14 in advance. We also have a three-day ticket that we offer at $34, and if you’re an ACC member you can gain access to all of our shows for free.

Crafthaus:  I'm a member, so I get in for free, that’s a good deal.

Melanie Little:  Oh good. Thanks for being a member.

Crafthaus:  You’re welcome. Is there customer parking in Baltimore and is it free?

Melanie Little:  The parking in Baltimore is not free, you will have to park in one of the various parking garages or hotels, it seems to work.

Crafthaus: Are there food concessions of the show floor?

Melanie Little:  Yes, there are three locations throughout the show with plenty of seating. There are lounges on the show floor that will have little grab-and-go-type food, and we have coffee service.

Crafthaus: With anticipated twenty thousand visitors on the retail days, and bad weather outside most of the time, it’s helpful that people don’t have to venture out and leave. 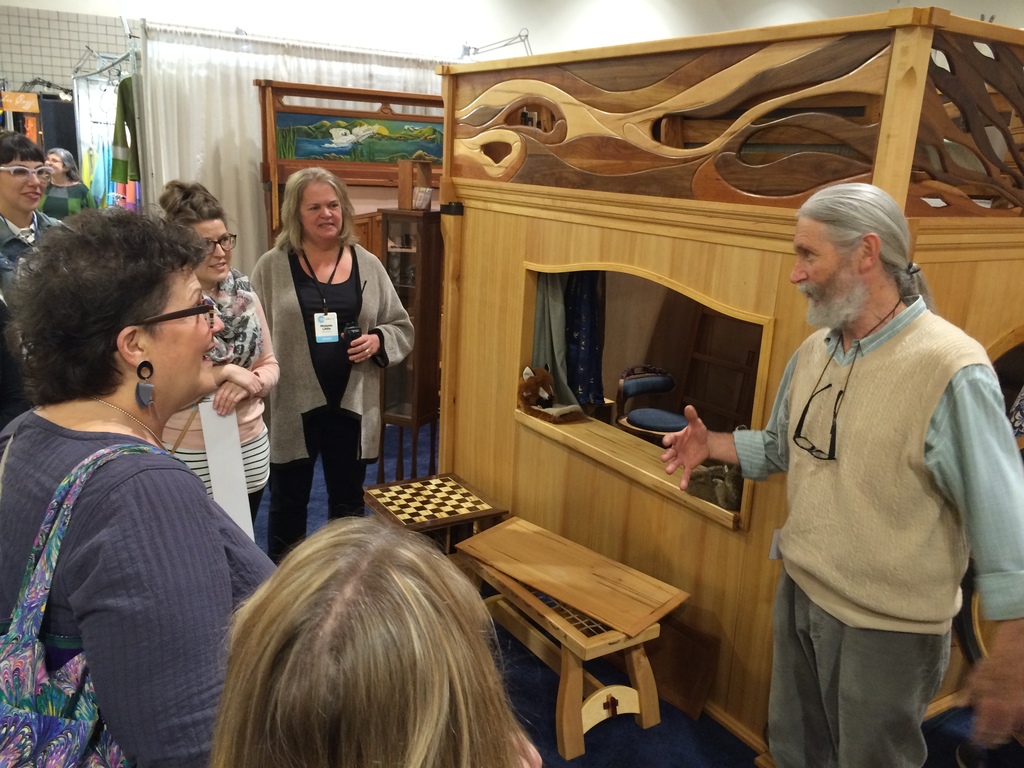 Crafthaus:  Are the ACC shows, and specifically the one in Baltimore, ever held in conjunction with other activities that are taking place in the city at the same time?

Melanie Little:   We have not done anything like that. No.

Crafthaus:   Because you typically get enough visitors as it is, or is it just not something that’s been explored?

Melanie Little:  I think really it's something that’s not been explored yet. Our marketing director reaches out to different groups in the cities to try some things, but so far we never tied-in with other events happening at the same time.

Melanie Little: For the past three years, for the wholesale show we brought in Cindy Edelstein, she has her own list of buyers and helps to promote the wholesale portion. That has been a really valuable partnership. There are also a number of other marketing and partnership initiatives that Pam Diamond oversees and manages, such as the LINKS Smithsonian Women’s group, the Mid Atlantic Arts Foundation, Charm City Craft Mafia, the American Federation of Art, the Greater Baltimore Cultural Alliance, WCBM-AM and Downtown Diane.

And the one you mentioned, the Balvenie group, they have really been great too. They are partnering with us again this year. 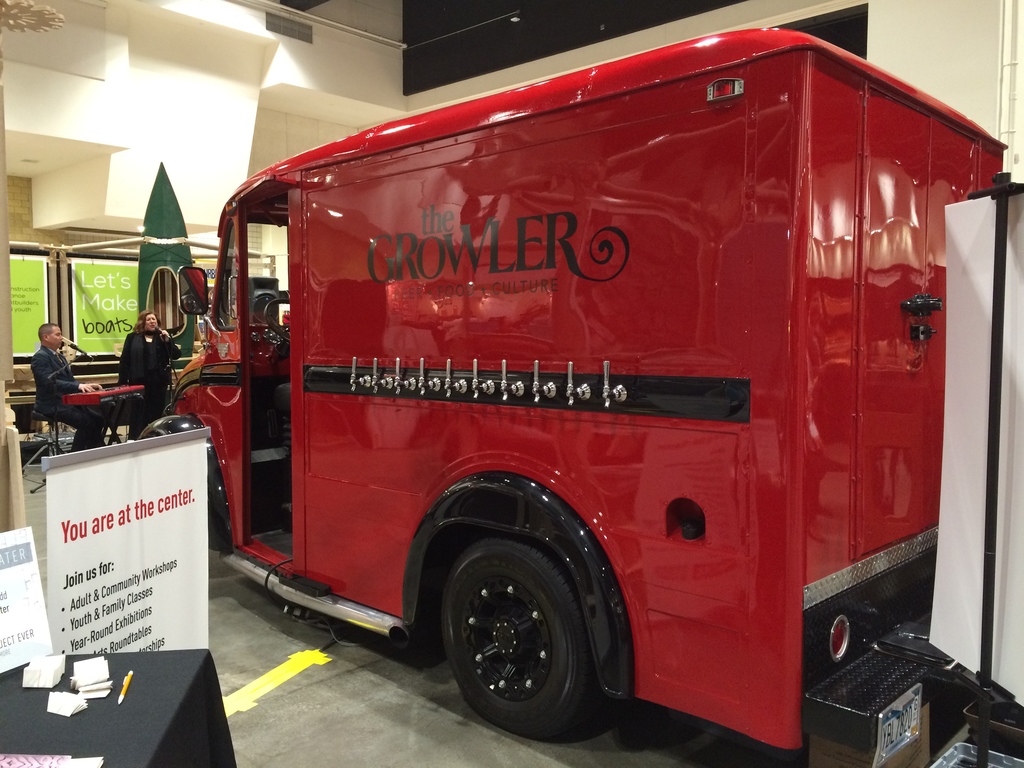 LET'S MAKE Area: Sewing onto old photos (above.) The Beer Growler bus (below.)

Photos: B. Martin for crafthaus.

Crafthaus:  So the Balvenie will have a booth and hand out whiskey samples?

Melanie Little:  Yup. They do that at all our shows. We’ve actually created this structure that we bring to all our shows. It almost looks like a Tinkertoy structure, for lack of a better name. It's beautiful, made out of wood. It's an open structure, but it's got little individual spaces. Craft groups come in and take over those spaces.

For example, we have a space in there with a stack of really old photographs and when people come into that area, we supply them with needles and thread and they can sew directly into the pictures. In another space we have someone offering beer samples, somebody might be making homemade soaps or jellies and things like that, and then the Balvenie is the large group, they're anchoring that whole area. They have a really huge space where they do tastings throughout the retail show, every day.

Crafthaus:   Is there any kind of entertainment like live music, a performance, or a fashion show planned for Baltimore?

Melanie Little:  There is. What's new this year is our Style Slam which is going to take place on the retail days. They're going to be in a booth near our Let's Make area. The designers will be inviting show attendees to get a makeover with work selected from show artists. That is the new thing we’re doing this year. In terms of music, we really don’t have live music at our shows other than during the preview receptions. 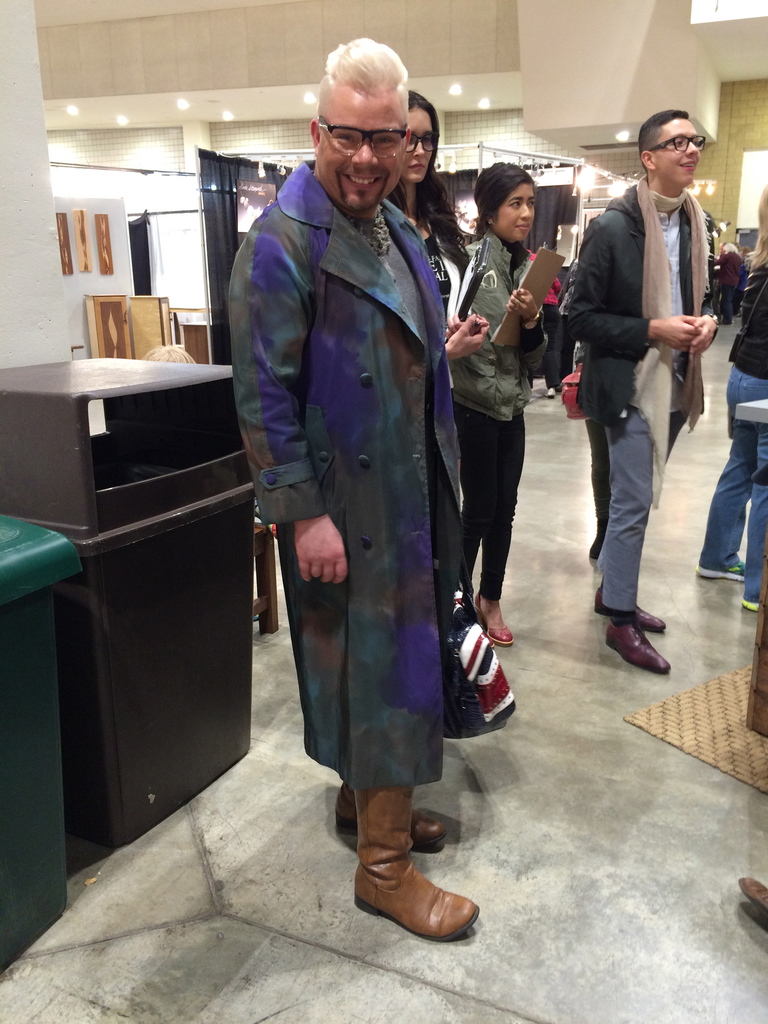 Grant Whittaker, Style Slam emcee, and his team of designers walk the show floor looking for highlights to feature. Photo: B. Martin for crafthaus.

Crafthaus:  Do you ever conduct surveys from your customers during or after the show about their ACC show experience?

Melanie Little:   Yes. That’s something we do, but not every year. We run surveys on average every two to three years. The response rate on those is usually fairly low, but we do read through all of the responses we receive to try to improve anything that we need to improve. Same thing with the office as well. They always send out surveys after the show and we’re looking for sales figures, of course, but it's also about feedback, positive and negative. We honestly read through every single one of those responses to see what's going on.

Crafthaus:   So what's the one survey question you would like everybody to respond to?

Melanie Little: I think the most important questions would be, what can we do to improve the show? What would you like to see?

Partial views of the show floor from the ACC Show office at St. Paul. The calm before the storm. Photo: B. Martin for crafthaus.