Laura Jaklitsch being interviewed in her studio during preparations to ACC Baltimore show. January 2016. Photo B. Martin, crafthaus

Continued from previous post:
(4) Booth Design, The Reality of Participating in a Craft Show

Crafthaus: How long does it take you to set up your booth and when do you start?

Laura Jaklitsch: There are usually around two days before a show when you can set up. The retail portion for Baltimore starts on Friday. I'll get there on Wednesday and set up part of Wednesday and all of Thursday. To do it well it takes time, you should not rush this. I like to get my whole booth set up in one day, the next day I focus on arranging the work, fine-tune the lighting and take care of all the other little details. If you have help it's going to go way faster. And for some shows, like Baltimore, people can drive directly onto the show floor when they're setting up, which is a huge help. Crafthaus: Drive onto the show floor with their cars?

Laura Jaklitsch: Yes. I don’t do that, but many do. I get dropped off via cab in front of the convention center and I'm bringing my stuff in that way.  Usually it takes me about a day. I'm slow [chuckles]. In Philadelphia people drive their cars right up to the booth. It's everybody all at once.

Crafthaus: What about noise and the fumes from the cars?

Laura Jaklitsch: It's a pretty intense process. I had never done anything like that before, so I was a little overwhelmed the first time. But you got a task to do, you got to get your booth set up. You just kind of get into this mode, like, all right I'm just going to do this. It smells like exhaust and last year it was snowing, so everyone's cars had snow on them which fell off. You have to watch where you're going because the union guys are also zipping around in their vehicles. It is a little chaotic, but when it's all set up it's fine. You just have to power through and get it done.

Crafthaus: By the time you're set up you’ll need a vacation.

Laura Jaklitsch: Well, that's why I'm trying to get all set up in plenty of time so I can get a good night's sleep before the show. If you're coming in exhausted, it’s a lot harder to deal with everything. You have to be able to think on your feet and problem-solve a lot of times. What happens if you run out of stuff? Can you run to a store locally and get it? Do you need to go to the Home Depot? If I can recommend anything, it's to make sure you have food with you, because you don't want to be hungry. Give yourself that lunch break if you need it. Some people are amazing and don't seem to need to eat anything, but I'm just one of those people who needs snacks. Check in with yourself. Am I tired? Am I hungry? If you're really pushing yourself you’ll notice that you're getting a little frayed on the edges and then your decision-making skills go way down. 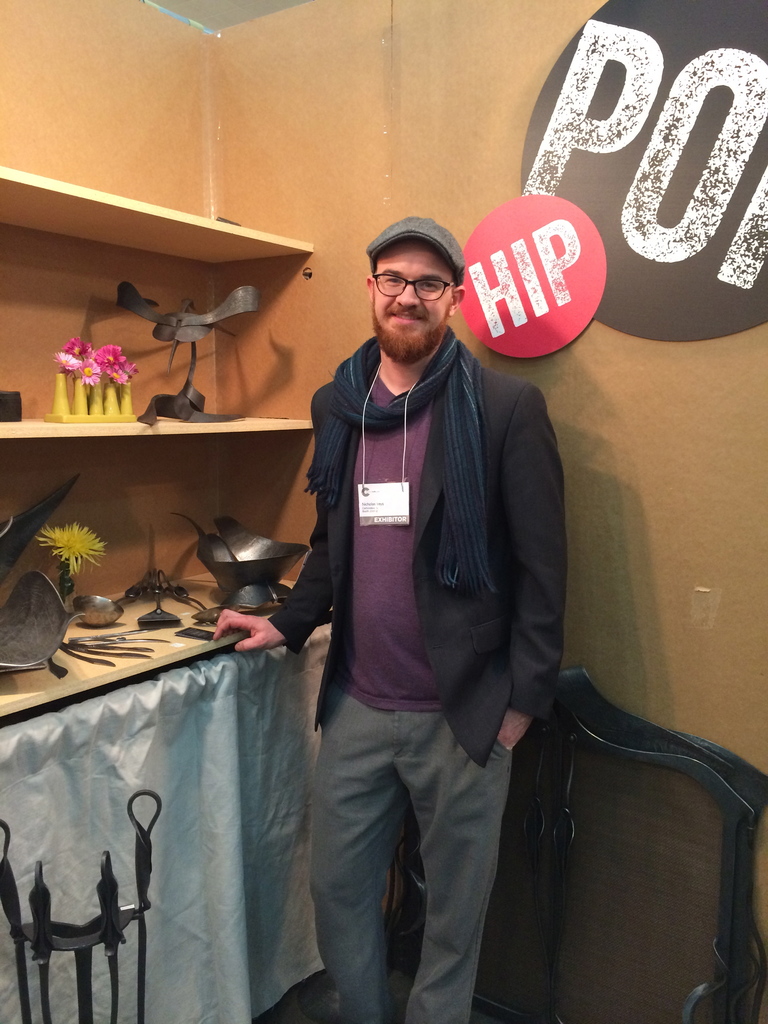 Crafthaus: What's the most helpful thing that you have experienced while setting up your booth?

Laura Jaklitsch: Last year, I was across from an artist who was about to retire, it was her last show. She was very nice to me and offered me her step stool to use and she kept giving me good advice. At the end of the show, she offered to let me take the step-stool with me. Unfortunately, I couldn’t take her up on it because I did not have any room in my luggage.

In general, people at craft shows are really helpful and that's one of things I love about doing the shows, there’s a real sense of community. I have offered to help others too, I always try to pay it forward. If you need something a lot of times people notice and just offer on their own. I was struggling with my screwdriver just to hand-screw something in and someone came right up and said, ‘Hey, let me just help you out here.’

The ACC has a buddy-system where they pair newbies with more experienced attendees. Last year, my first year, they assigned me to someone local in Boston that I already knew and she was super helpful, Melli Finelli (http://www.mellefinellijewelry.com/.)  She's also a jewelry artist and she came over on the first day, nicely critiqued my booth and helped me do a better job.

Crafthaus: Tell me more about the buddy system, please.

Laura Jaklitsch: When you are signing up and get a contract from the ACC, they give you the option to be a part of what they call a buddy system. They match artists who are looking for advice with seasoned exhibitors who have done these shows a million times. I had a lot of fairly basic logistical questions for Mellie, she was very helpful to me as a buddy. Everyone has their own system of how to get things done, so the more you can speak with people, the more you learn. 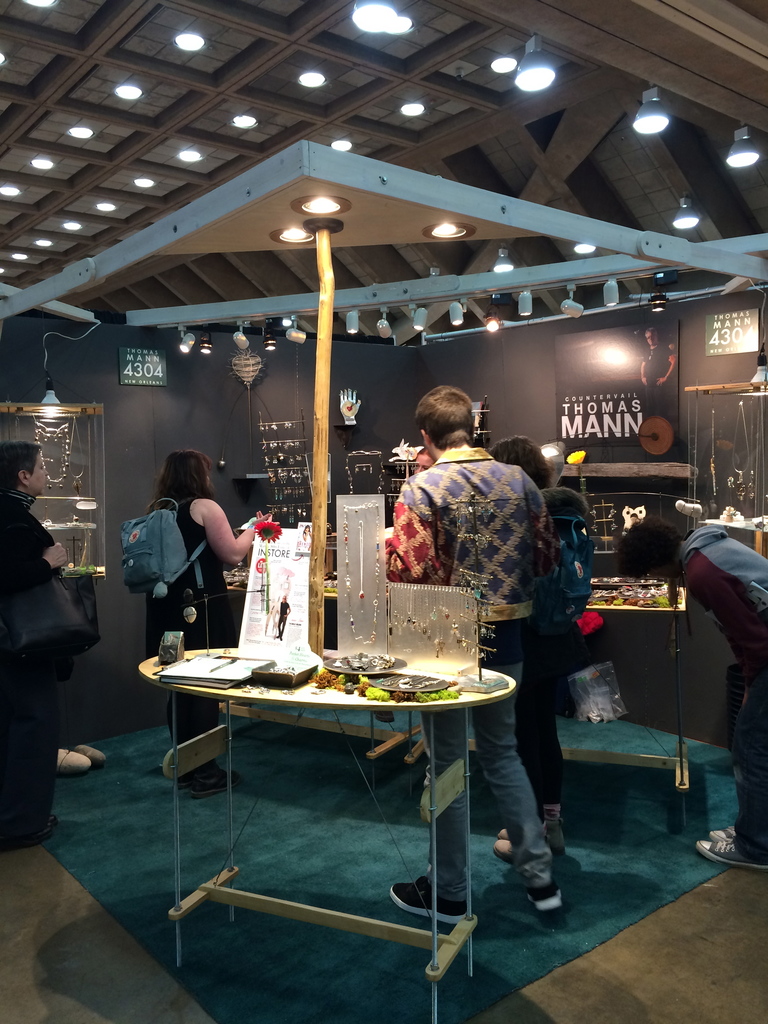 Crafthaus: Do exhibitors hang out together in the evenings?

Laura Jaklitsch: Yeah, they do. A lot of people go out and grab dinner together. I am kind of an introvert, but I enjoy doing this. These are my colleagues and my co-workers, and a lot of them have become great friends by now.

Crafthaus: You also have interaction with the ACC staff, how has that been?

Laura Jaklitsch: It is a huge show and I haven't had a ton of interaction with every single staff member. I did have some interaction with the marketing team and they were really wonderful. They are absolutely enthusiastic about their artists. They were doing an interview on television with one of the local Baltimore TV anchors last year and had her wear one of my rings, that was really great for me, of course! My experience is that the ACC staff is wonderful. I understand there are 600 artists or more out there, so there is no way they can meet and attend to every single one of us. I would love to meet more of them though if I had the chance, just to say thanks.

Crafthaus: A show of this size is very difficult to manage, lots of things happen behind the scenes that need attention. To go back to the application process for a moment: If you could name three things that an artist should take into consideration when planning to participate in a show as far as the application process is concerned, what are your recommendations?

Laura Jaklitsch: My personal philosophy is, "Apply now, decide later." So, if you've ever been thinking about doing a show, just apply for it. You can make your participation decision later. The next thing I recommend are professional photos. I think they are worth every penny. A lot of people see thousands of images, and that's the only way that they will ever see your work. Make photography a priority. Jurors see many images in succession, if you have a homemade photo that is a little dark or a little blurry, your photo is just not going to be considered. Jurors move on. Thirdly, consider the cost of the application fees because they can add up. Plan and budget  in advance. These application deadlines come up quickly one after the other, they're often to be paid six months to a year in advance of the actual event, so you want to have your images and everything planned out. You're not going to get into everything but you may be able to get into some shows and then you better be ready.

Crafthaus: Especially in the jewelry segment.

Crafthaus: I think jewelry is the biggest segment in every craft show.

Laura Jaklitsch: Oh yes, it is. 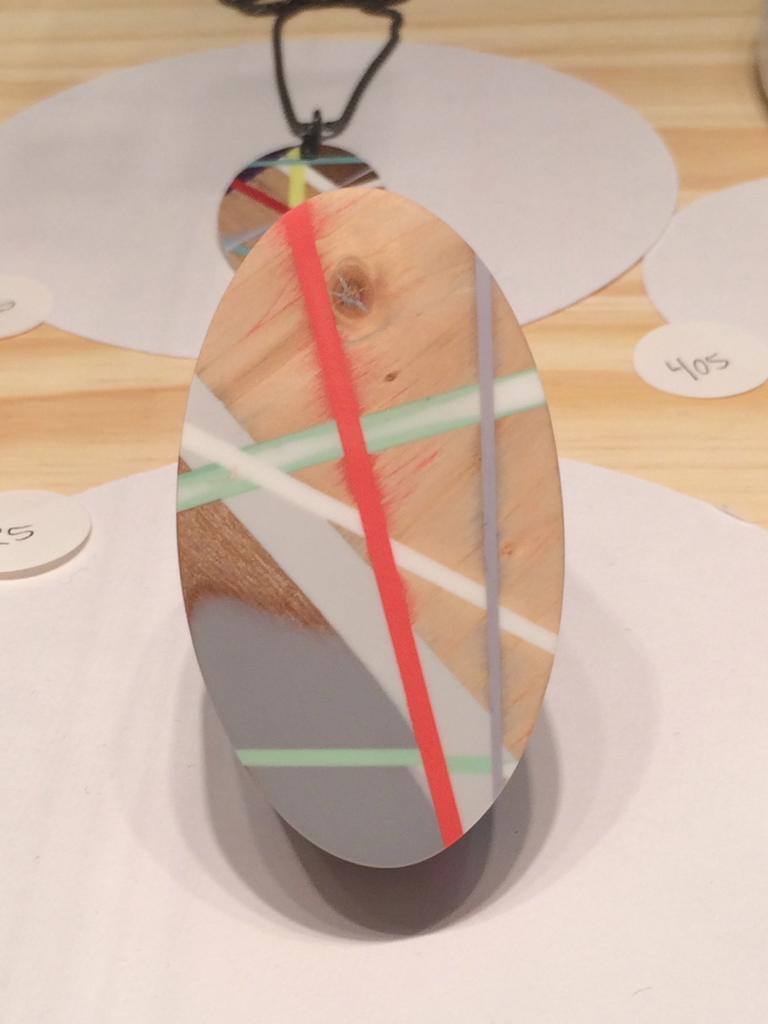 Laura Jaklitsch: Well [laughs], you kind of walk out into the aisles and you look up and down, and all the artists are standing in the middle of the aisle.
When I went into this show I said to myself, "Am I prepared to lose the $4,000 I invested? Can I do that?" And I decided for myself that I'm going to take that risk and am going to accept that it's a possibility that something will happen, and I won't sell a single thing. I went into the show with that reality clearly in front of me. You just have to realize that stuff happens. You can't put all your eggs in one show. You have to always have other things on the horizon, so if this one thing doesn't work out, that's not going to completely devastate you financially. That’s how I chose to look at it. Did I ultimately lose some money? Yes, but I didn't lose the complete $4,000 so it's not the worst thing that could have happened. Did it help my career? Absolutely. Did I learn a million things? Yes. And I was just proud of myself that I made it too. It gave me confidence to do more shows. I just got a lot more out of it than purely the financial aspect. You always have to go in with the possibility that you could lose some money.

Crafthaus: You said this helped your career. In what way?

Laura Jaklitsch: I felt that participating in the ACC Baltimore show raised my profile by a lot. More people than ever saw my work. More people than ever heard my name. It gave me great connections in the field. I met so many people and many of them I now consider friends and colleagues. I got a lot of useful advice from seasoned artists that were hugely helpful. I kind of feel like a part of this community now.