Olivia Shih: Hello Andrew! Could you share with us how you found your way to creating jewelry that deals with gender and interpretations of masculinity?

Andrew Kuebeck: Ever since high school, when I started taking jewelry classes, I’ve been interested in working figuratively with my work. Early on, I was really inspired by the works of Chris Smith and Keith Lewis and really enjoyed how they were able to incorporate the figure with richly constructed visual narratives. As I began to branch out into my own work and research, I found that I was constantly returning to certain themes. Narrative, personal history, the nude, and props were all components that really interested me and continually emerge in my work. 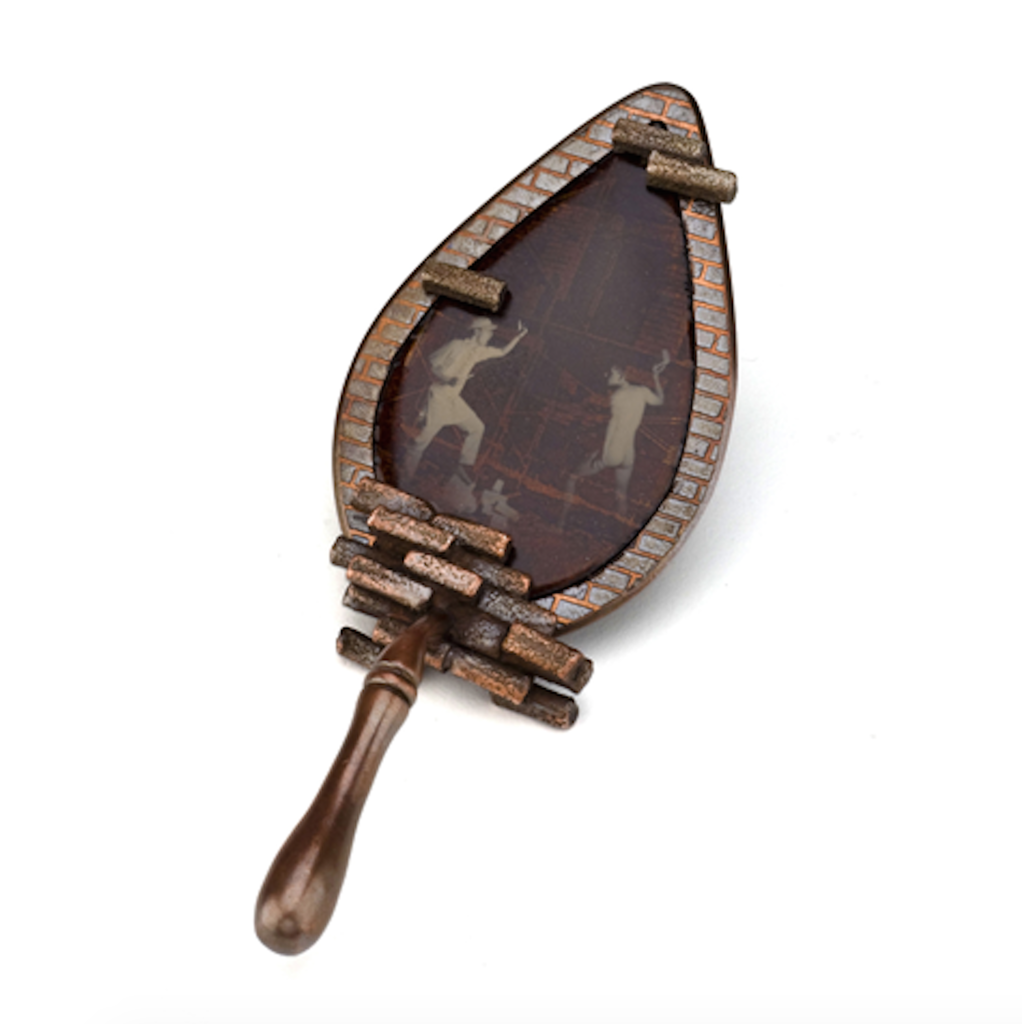 OS: Your work also incorporates photography, especially images of the nude. How did you find photography?

OS: Why did you choose jewelry as a means of exploring gender?

AK:  I am really interested in the display and concealment of identity, gender, and masculinity. I think the genre of beefcake photography, one which blends comical post war masculinity with an internalized angst about human sexuality, serves as a key touch point to our contemporary struggle to define ourselves and how that outward display unfolds. I have a tendency to think of jewelry formats in a very specific way, and for me, the brooch has always resonated as an ID badge for the wearer. I’d like to think that when someone wears one of my pieces, they are displaying to the world a part of themselves that might not traditionally be seen. OS: Your series, Identities, liberates the male nude through photograph decals applied to white enamel surfaces. You’ve noted that this series is a method of correcting “a dearth of nude male representations in contemporary art jewelry.” Why was it important for you to right this wrong?

AK: Something that I have always found interesting is how limited the male body is displayed in our society. This is the same in art jewelry. Modern American society has constructed a huge taboo around male nudity. The male nude seemingly can’t exist in our world without being an object of humor or prurient display. Taking art history classes opened up a new world to me of what the male form can be interpreted as. From mannerist sculpture to impressionist paintings, there is a history of Western displays of the male nude that has been systematically rejected by “mainstream” American art. There are, of course, some artists who have explored the male nude, but those have traditionally been within the realm of gender specific or gay art. 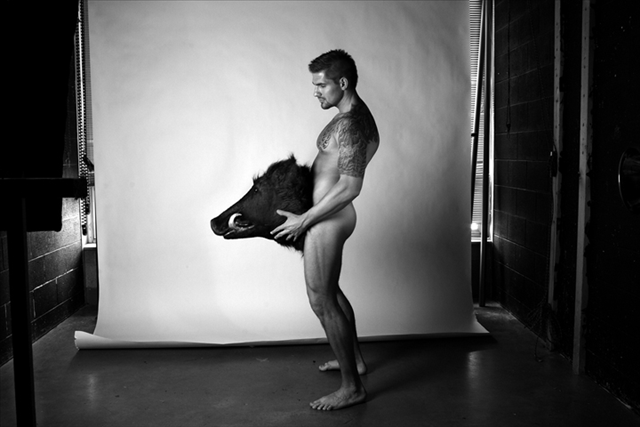 I truly believe that the male and female body in their natural state are completely beautiful entities, and as a contemporary society we seem to have lost the neutrality and purity of the body and constructed an image of it that exists now in solely a sexualized context.  We too, as a western society, have embraced sexuality in most of its forms as taboo and therefor have decided to mask the natural body in adornment to protect it from the gaze of the world.

I do intentionally note that only some forms of sexualization have been taboo in our society. Long before Betty Page and Vargas Girls, our hetero-normative patriarchal society had embraced sexualization of women while adamantly penalizing that of men. The gaze on the male body has traditionally been rejected due to the belief that if the male body were to be subject of the gaze and consumed, then traditional ideals of masculine power would be attacked and its power diminished. I personally don’t think that’s the case; I think that the male nude, when placed in a nonsexualized nude context, is so much more than masculine power. With this series, I truly am interested in the history and the neutrality of the male nude and hope to normalize its natural viewing.

OS: I love your idea of normalizing the male nude through jewelry, which can travel from the domestic sphere into public spaces.

AK: Definitely. Creating jewelry out of precious metals and glass adds an economic importance to imagery that might traditionally be seen only in the privacy of one’s home. When someone wears one of my pieces, I hope a dialogue is struck not only between wearer and piece, but between the wearer and anyone they happen to meet that day. The only way to normalize male nudity is to allow people to be exposed to it, to contemplate it, and to evaluate their own beliefs based on what they see and feel. OS: Identities humorously reimagines male stereotypes of sailors, cowboys, hunters, and others. How did you strike on the idea of accessorizing the nude beefcake character with nothing but two to three iconic props?

AK: I think it’s really interesting that as a society we have constructed masculine ideals. From the Stetson man to James Bond, we value courage, rugged individualism, masculinity, and a muscled exterior protecting a slightly dented heart of gold. Most heroes seem to follow this archetype, and as a society we typically judge ourselves and those around us as to how well we seem to fit into this model. This has led directly to the creation of the “clone” in society. One who embodies the heroic societal ideal, representing it to the world through the use of props and attributes.

With a lot of the iconography and props that I use for the “Identities” series, I look at the precise iconic masculine stereotypes and how objects are directly used to reinforce the character that we feel we need to play in our world. From axes to rifles, certain objects are iconically read as masculine and with these pieces I was interested in the juxtaposition of them against the male nude. Through these pieces, I wanted to emphasize to the viewer that our ideal masculine male is a construction. 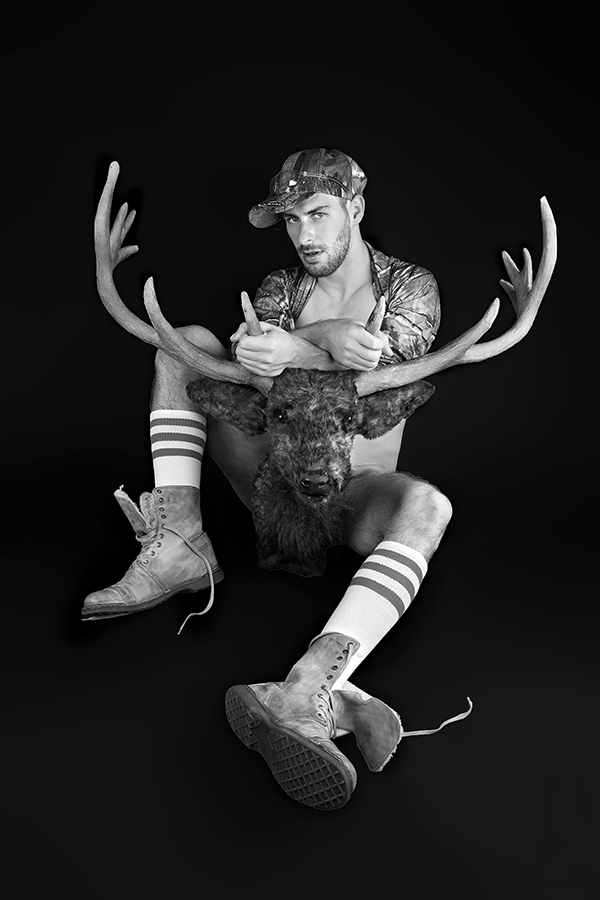 OS: With Occupational Brooches, you tackle the constructions of “masculine” career paths that men in your family have chosen. Why did you choose to incorporate personal history for this series?

AK: The “Occupational Brooch” series really served for me as a visual way to discuss with my family why I felt the need to go into a career in the arts. Understandably so, every parent wants the best for their child in life, and I remember the hesitant optimism of my parents when I told them that I was going to be going to grad school to get an MFA in Jewelry Design. For three years in undergrad, I was a Pre-Med major who took a lot of art classes on the side. It came as a shock to my family when I took became an Art Major and stopped taking classes in the sciences. I can remember talking to my mom throughout my first year of grad school about how I really didn’t want to be a doctor and this “art thing” was really gonna work out.

For the “Occupational Brooch” series, each brooch looked at a traditionally "masculine" career path that past men in my family choose, with each piece taking the form of a tool that they would have used in their careers. Within each brooch I staged a self-portrait battle, pitting an authentic self (one who is following his own path in life) against one that is trapped in the cloak of tradition and familial expectations. I was really happy with how this series came together, and having made them, I think I felt more equipped to talk with my family and use the brooches to start a dialogue on my career goals.  With time, my parents became incredibly supportive and I couldn’t be happier with my decision.

OS: I’m really glad you changed course and stuck with art jewelry, despite familiar expectations. Your work contributes to the much needed discussion of masculinity through humor and narrative.

AK: Thank you. Masculinity is kind of a heavy topic to discuss in any format. It really is a subject that can be very polarizing and has a tendency of making people incredibly defensive. As a man, I've experienced how our society forces a lot of ideals on men. And men are often coerced into living within the lines o these ideals. There are norms in our society concerning what actions are deemed appropriate for men to do, and harsh societal punishments for those who choose not to or can’t follow. As with most difficult topics, I believe that the use of humor can quickly address the topic while not ruffling too many feathers. Humor is also a great way of allowing people to relate from their own perspectives. When someone laughs or chuckles at something, they have found common ground with some element in the discussion. Hopefully, through humor, viewers will be able to digest something that they would have otherwise reacted against or simply ignored.

OS: Could you name one or two jewelry artists who address gender issues? Why do you think their work tackles this topic successfully?

AK: For me, personally, I continue to be inspired by, drawn to, and in love with the work of Chris Smith. The technical complexity, the imagery, and the scale of her jewelry and metalsmithed works have always humbled me in my own making and continue to inspire me to work harder. I was first exposed to her work when I was in high school. My art teacher had a women in metals poster on the wall, and one of Smith’s iconic tea sets was pictured. I was new to fabrication and casting, but seeing how she was able to so fluidly make forms, and combine iconic attributes dealing with gender roles was truly inspiring. I think Chris Smith’s work is so successful because of the directness of the narratives that she constructs, how relatable they are, and her unique ability to present these topics so elegantly.

OS: I agree, relatability is key if an artist wants the work to resonate with the audience. Andrew, thank you so much for agreeing to this interview!