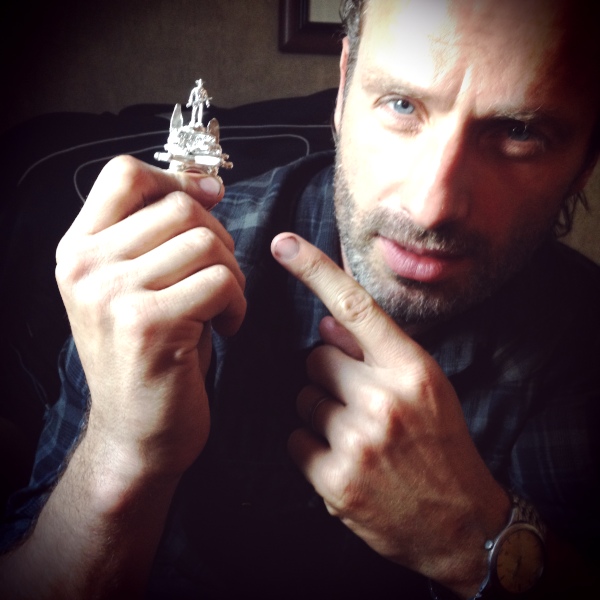 Created exclusively for the AMC Network series “The Walking Dead,” this piece encompasses major themes of the show. Zombies and brain matter creep up the shank, a rifle toting sheriff stands atop a tank crushing hoards of dead bodies. The giant sheriff star acts as the stage that everything sits on, because the presence of the sheriff is the largest among all of the show’s characters. The background is the Atlanta city skyline, a backdrop of the show.

He was kind enough to send a snapshot in his study holding his new piece!

Rebecca Skeels commented on Rebecca Skeels's group The Association for Contemporary Jewellery
"Apply online to be part of Handmade Interact   We're here to support, promote and celebrate artists and designers. If you're looking to increase your visibility online and sell your work throughout the year, we would like to invite…"
yesterday

Rebecca Skeels commented on Rebecca Skeels's group The Association for Contemporary Jewellery
"We are pleased to present some exciting new events as part of Handmade Interact; our series of weekly live demonstrations and talks. The online events are FREE to attend although there are limited places. Find out more and register now.…"
yesterday

Rebecca Skeels commented on Rebecca Skeels's group The Association for Contemporary Jewellery
"Goldsmiths’ Jewellery Lecture Series: Rue Pigalle and Goldsmiths’ Fair have collaborated to create a four-part lecture series that explores the stories of survival, endurance and innovation from the 14th-century jewellery world in London…"
yesterday