I Love Your Work and Want to Make One for Myself is not a compliment, it is a copy 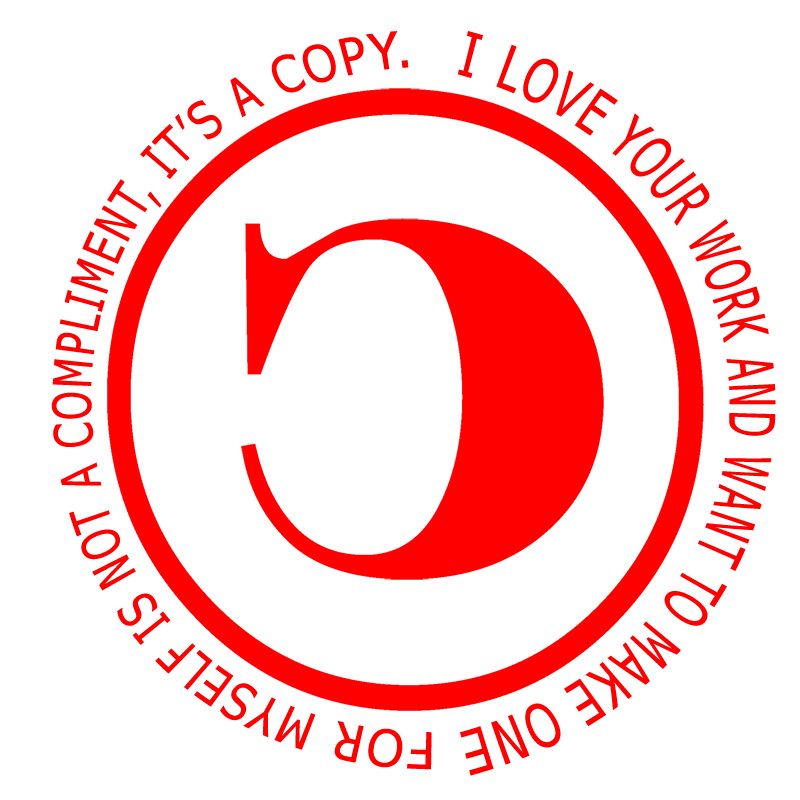 The post "I love your work and want to make one for myself"  is raising a lot of discussion and tons of comments. For this reason, I am bringing  a blog post to the Crafthaus community. For Crafthaus, I thought that this post could include an another story brought to my attention. The names have been removed to protect both the innocent and the guilty.

The unfortunate problem right now is that digital technologies have developed faster that the social mores surrounding them. People copy images without attribution, or copy content they didn't write. Whole pages exist on Pinterest about "I want to make this."  Makers stand at their wholesale/retail booth display which cost them $1,000's  while enthusiasts make deep inquiries "I love your work and what to make something just like this for myself."

Here is a sample story:

It has happened again! "Minutes before reading your post, I  had actually responded to a "tell me how to make one" request. Here is one of several stories (of many) that I have on this topic:

"Several years ago while I was attending a conference, I succumbed to overwhelming pressure to share a technique I had developed. I did a demo of the technique for a small group of 6 or 7 people who all swore they would not pass it along, since I was actively selling the work made with this technique."

"Only a few weeks after my demo, a free online tutorial was posted by someone who had not even been present at the demo. I discovered that one of those who saw my demo at the conference reproduced it during a large guild meeting after she returned home, and the written tutorial was derived by a third person from that guild meeting."

"When I contacted the tutorial author to ask her to take the tutorial down she said something like "No, the community NEEDS to share this important new technique". My BAD for naively sharing in the first place, but I was amazed at this attitude and the disregard for the effect on my livelihood."

"I have had more than one person very nicely ask me "Since you do not plan to teach or write a tutorial for technique X, would it be OK if I did?" To me, it felt like they were asking: "Could I please profit from your hard work and also undermine your business?" I was baffled as to what they could be thinking, how they could see this as an ethical thing to ask."

"When a friend sent me a link to a direct knock off of one of my new designs for sale on Etsy I contacted the owner of the Etsy page and explained why they should remove it. The response was to send me links to two other copy cat pieces as evidence that everyone else was doing it, so she should be able to as well. It was eventually removed after I persisted.
"I saw an advertisement for a class featuring the technique I developed, which had now long since been out there. The image for the advertisement was an exact copy of one of my recent designs. There is often confusion about the difference between a TECHNIQUE (which can not be copyrighted, keeping it confidential is the only way to protect a technique you have developed)  and a DESIGN (which is automatically copyrighted in the US)."

FROM Harriete:
This one story demonstrates many "BAD and UGLY's in the AGE of the Internet including, but not limited to: 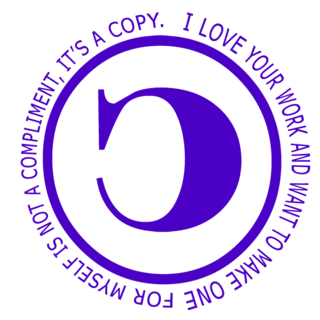 I am sure that many of you have stories to share and welcome hearing what you have to say. (If you want me to share your story anonymously, send it to me privately. and I will post it as a comment.)

The issues are numerous, but our first step is to recognize the problem and bring awareness to all levels of the arts and craft community.

"It is not our abilities that show who we really are, it is our choices."

First, and most importantly, every self-respecting production craftsperson I know condemns knockoffs. Uniformly, people agree that the theft of a living maker’s designs is wrong. Theft is unethical. Perhaps more importantly, theft takes money out of the pocket of the person who originated the design. The inventor pays a price in lost sales every time her design is stolen.

Make no mistake, this is judgment. We look at the knockoff and judge whether or not it is sufficiently original. (In exactly the same way, we look at innovative work and perceive its newness.)

Quoting Bruce Metcalf in his post on Crafthaus:
"As I walked around the Baltimore ACC show, I saw four or five jewelers who had knocked off Pat Flynn’s curved bracelet. You know, the black turned-up bracelet with the tiny collar-set diamonds or the speckled gold onlay. He invented it years ago. I was surprised at the sheer boldness of these knockoffs. Don’t these people have any shame?"
http://crafthaus.ning.com/profiles/blogs/can-production-craft-be-ju...

Comment by Harriete E Berman on March 14, 2014 at 8:01pm
Carolina, A wise approach. It is unfortunate that we have to take this approach, but very wise. When your work is your life and your livelihood, it is important to protect your unique style, techniques and identity as a maker.

Just wanted to let everyone know that I will be discussing copycat problems and intellectual piracy on March 27, Thursday 3:00p.m. (California time). This will be live on Jay Whaley Blog Talk radio.

The internet with be BURNING. 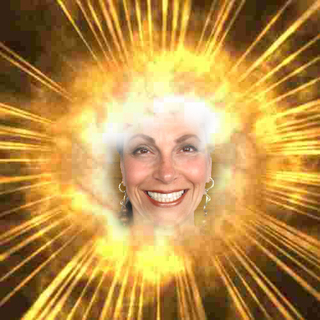 The topic is HOT. Save the date. Listen in.

Log in to ask questions live in the chat room.

In the recent Spring 2014 issues of Polymer Arts Magazine is a lengthy article about "STEALING TALENT: The Gray Question of Copying and Accreditation."

The most effective words come from the editor Sage Bray:
"If you copy someone else's design or style as a means of learning, you should not sell it and I highly recommend that you not post it on any publicly viewable online site, even if  you give credit. Why? Because other people may pull an image over to Pinterest or Tumblr and attach nothing but your name to it, leaving out the original designer's credit. As images circulate, that can reflect poorly on you by appearing as if you are stealing ideas or lack originality. Share your exercises with friends & guilds privately. Show the world your true work."

If you are interested in a copy of the article look on your news stand or go to www.thepolymerarts.com

Comment by Harriete E Berman on March 12, 2014 at 6:16pm
Ever since the lecture, "The GOOD, The BAD, and the UGLY in the AGE of the Internet" more dialog, articles and discussion are coming forward. The Polymer Art Magazine just came forward with these three rules. The first mandate that I have seen from an organization or magazine.
Rules for Giving Credit
1. Do not teach a class or tutorial that someone else has developed presenting it as your own.
2. Do not directly copy someone’s design and call it your own – for any reason.
3. Do not copy and sell printed images or materials, tutorials, books, techniques of another artist.
from "The Daily Polymer Arts Blog" http://www.thepolymerarts.com/blog/buying-time-to-be-passionate/

Thank you Crafthaus for featuring this post. It has raised a lively discussion online. I think bringing visibility to these copycat issues is very important for the health and creative growth of the craft community.

A FEW Excerpts from a COMMENT  from ASK Harriete:

At shows, I do not offer information on my technique, which is unique within my field. I cringe when someone who is looking at my work starts to ask questions about clay bodies and process, or when a group stands together while one of them lectures the others on my technique. I do take some pleasure in listening in; they are never correct, but that's not to say they don't go back and try something that is their own interpretation of my work, and that makes me crazy.

i work in an art center that is open to the public and this issue is rampant. A woman who visited my studio regularly ( and no, never purchased any of my work) told me, as if it was the biggest compliment in the world, that she copies my designs in fused glass. I work in clay. I was horrified and gave her my standard talk on intellectual property, but she just didn't get it. After all, she told me, "they're just for me. I'm not selling them." Aaargh.

As another response: Andy Cooperman wrote an excellent post about the ethics with the workshop impostor and "The Guild of Unauthorized Sharing."

Ethics: I know it when I smell it.

One more comment, "accepted practices" is a poor justification for behavior when it crosses ethical and legal boundaries.

It is  time that we examine what is happening in the arts and crafts community and evaluate the impact. Digital technologies have rapidly changed our culture without time to develop ethical and legal boundaries. Until we raise awareness for ethical and legal behavior the copycat problem will continue to erode the future of crafts with derivative work, and attitudes that do not foster creativity and professional growth.

Here are a few posts as examples of the issues:

Copyright Ownership vs. Owning the DVD

The Guild of Unauthorized Sharing

Alibaba and the Copycat Thieves