Trevi Pendro, Alexander McQueen and Me

Many years ago, I realised that Alexander McQueen was not a couturier in the usual sense of the word. It was his commission of the collar from Shaun Leanne for his 2001 catwalk show which drew my attention to his work - the collar is a stunning assembly of lethal silver spikes and grey pearls, seen at 7:40 in the video below - and the show just blew me away. From that moment on, I never thought of McQueen as a clothing designer but as a sculptor, a critic, an historian, someone with a deeply dystopian vision and an incredible understanding of not only the history of fashion but of the history of Europe.


It was McQueen's re-imagining of history through a dystopian lens which appealed to me, and when I started to develop my own "Post-Apocalyptic" works, I realised that I was, in my own small way, treading a similar ground; looking at the history of jewellery and re-interpreting it. McQueen used antique flags and Japanese printed screens: I used corroded iron conduit and the legs of tables.

Over the short period from the emergence of my Post-Apocalyptic works in 2007 or so until February of 2010, I had been plucking up courage to contact McQueen and ask him if he would be interested in some sort of a collaboration - hubris, some might say, but I postponed and postponed, fearing rejection - and decided to write to him on Monday 8th February. I have no idea what finally persuaded me to write, where that courage came from but it was all to no avail. He died on Thurdsday 11th February.

Jump to March 2013 and I have not really discussed this incident with many people. Dingo knew of my plan to write and I have told a handful of people subsequently but when I was visiting California College of the Arts at the invitation of Curtis Arima, I fell into discussion about Alexander McQueen with one of the students, Trevi Pendro: 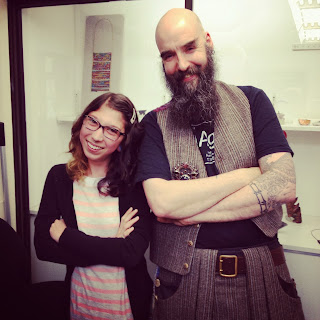 As part of a class she was taking with Marilyn da Silva, she had to make a thimble for a famous person and contacted me to discuss using ideas from my own work - especially the "Four Cocktail Rings of the Apocalypse" - in her thimble which is made for McQueen, admirably incorporating my lensing of jewellery history into my own personal history. 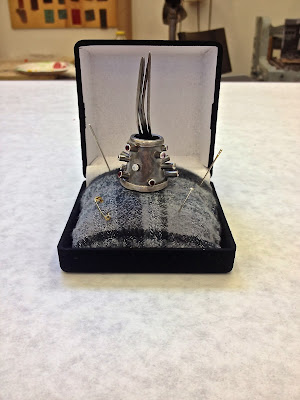 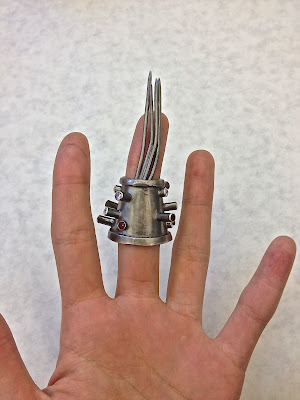 I love this piece. An "unusable" thimble, referencing the way in which I used gemstones on "War" and Pestilence": 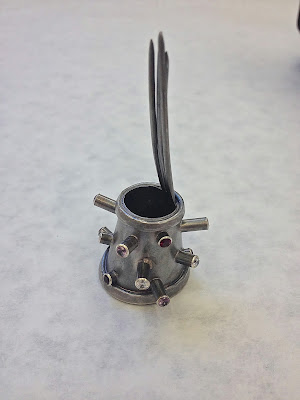 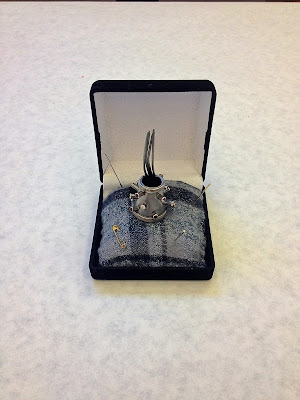 A fantastic project and one which has garred me to action to finish my own tribute to Alexander McQueen, "Fashion:Victim" -