Waste nothing of her career - Laurie Schram

Laurie Schram talks about her project 'Waste nothing of her career', which features in the Mother Maker crowdfunding campaign, and her foray in to the world of kaka pantone colours 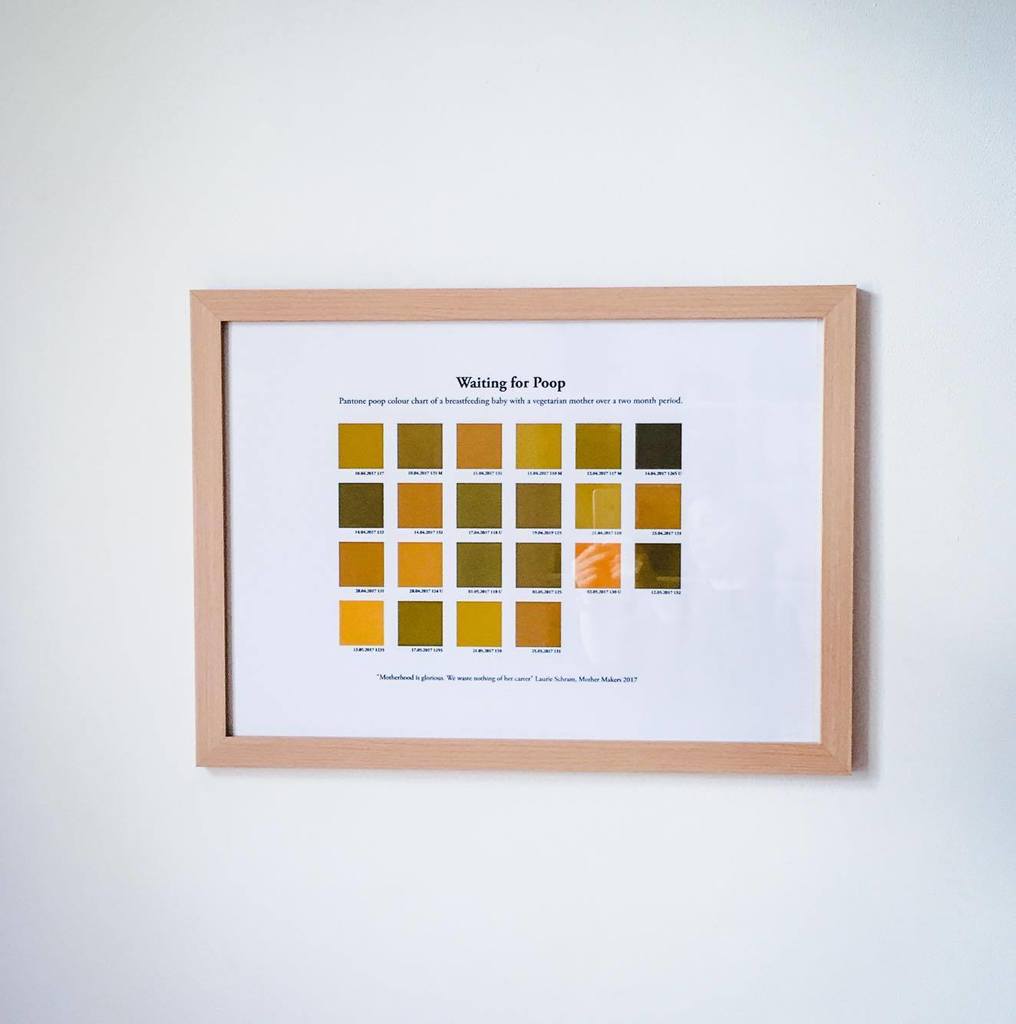 Aesthetically these are difficult colours for me. Pantone 448C, also known as "Opaque Couchè" and officially the ugliest colour in the world has been on my mind for quite some time. I cannot bring myself to be against any colour, I want to believe that colours are objective and meaning comes from context, layering and nuance. Giving up on 448C seems insensitive to the complexity of this world. My personal preference has always gone to CYMK poppy colours and shiny plastics, the palette of Jantje Flijschut being my absolute ideal. Colour is not what I'm known for, I've never been able to fully immerse myself in the pure deliciousness of it because I have a need to confront problems in my work.

I had a baby. When you have a baby an unholy s*** storm of bodily fluids hits you like an avalanche. Words you wish you didn't know come into your life, things like "lochia" and "vernix" (do not look these up, save yourself). After a week of particularly nasty coloured nappies I decided to do a Pantone chart and forced myself to crouch over each nappy with a Pantone book choosing the closest match. It was awful to do but also distracted me from something I was not equipped to deal with yet was forced to do. I now waited for the poo so I could work. I photographed every kaka coloured object I found for a year. It gave the disgust a higher purpose and took it to a level of absurdity that was soothingly nihilistic to me. That point where everything is so ridiculous that nothing holds any meaning anymore is what I tend gravitate towards. It was also the only way I could exist artistically as a new mother with no mental or physical space to do anything but mothering.

I was raised by a mother with OCD so it's unclear weather my disgust is hereditary or beaten into me by virtue of my rather odd upbringing in which I functioned within another's obsessive bubble. Disgust is described by Freud as one of the 5 basic emotions, it isn't as insignificant as we may think.

*Ironically "couchè" not only means layer but is also the word for nappy.

Mother Makers is a network for exchange and dialogue for mothers struggling to find their way back into their art/design practice after having children. Mother Makers actively examines the process of art production as a mother with the aim of developing strategies and creating opportunities that are tailored specifically towards the needs of the maker-mother. It is a support system for creating work that embraces the limitations of childcare at it’s core. By seeking visibility it is our intention to reclaim a space within art and design, as well as in the wider arts for mothers like ourselves.