Ceramic Sculpture: On the Brighter Side of Things

This collection of work explores light hearted commentaries or humorous qualities in the realm of ceramic sculpture. These qualities can comprise of absurdity, irony, duality, translations, and/or can be found in the use of color, form, or movement. 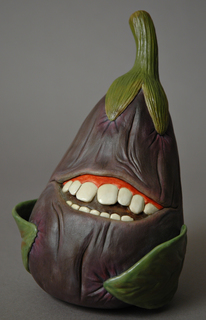 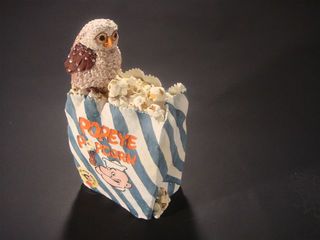 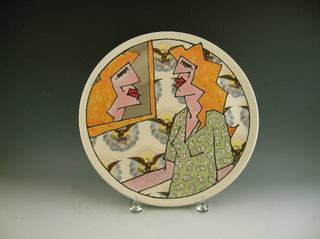 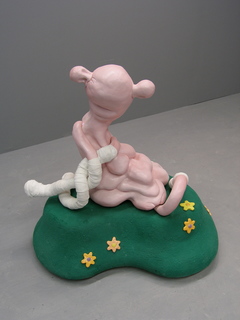 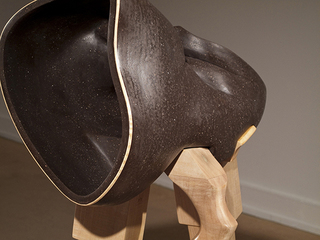 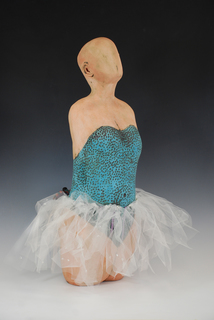 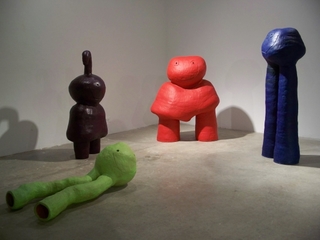 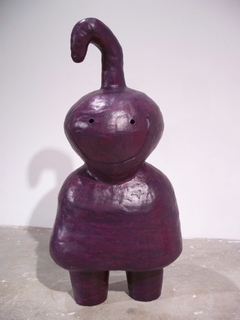 Mary Elkins
My Family, Close up of Mary
Low Fire clay, acrylic paint
42"x18"x14"
2009
When I was four, I drew an image of my family, and I have revisited it through the creation of these three dimensional figures. Making these brings the idea of my family closer to me. The scale is based on my height as a 4 year old, and the others are scaled accordingly based on the original drawing. 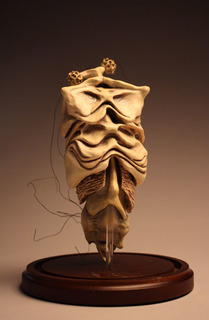 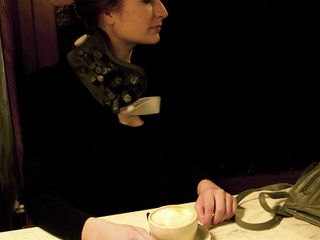 Jonathan Pacheco
Wearable Sculpture (Neck Piece)
Black stoneware, nickel silver, and belt strap
5.5"x8"x4"
For the wearable sculpture I wanted to consider everything from the start. Beside actually making the pieces, I considered how and where it is going to be displayed, how is the lighting going to hit it and is the space between the viewer and the piece. So from the beginning I thought of the work more than just jewelry but mini installations on a photo. I consider who would be wearing the piece, what type of clothes they would wear, and where they would be photographed. Fidencio S. Montalvo
Pocket Bombs
Porcelain, glaze, and mixed materials
3" diameter 4" wick
The Pocket Bombs series was originally created as a timeline of explosive phrases during specific Presidential Administrations. My interest was with the use of key words during the respective administration as a way to win over a public opinion. However, I also noticed the redundant use of these phrases by all sorts of media groups, to the point, where some phrases might have lost a little bit of their “Shock and Awe”. They have now become an interesting way for me to keep up with world events; their small-scale size, as their name implies, makes them accessible for traveling convenience. Fidencio S. Montalvo
Pocket Bombs: SMART Bomb
Porcelain, glaze, mixed materials
3" diameter 4" wick
SMARTbomb was a savvy new way to talk about America’s new technology guided missiles that would apparently save thousands of civilian casualties, made famous by the Clinton Administration of the 1990’s. This also references the clever marketing design of a particular sports drink. 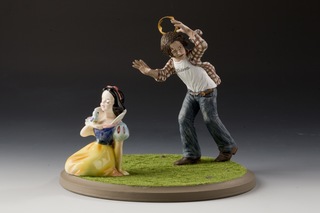 Derek Reeverts
Any Port in a Storm
White earthenware, mixed media
10.5"x10.5"x9"
2010
This piece addresses the idea of a placeholder within our inter-personal relationships. How much weight is placed on the internal vs. external and how heavy does that weight become? 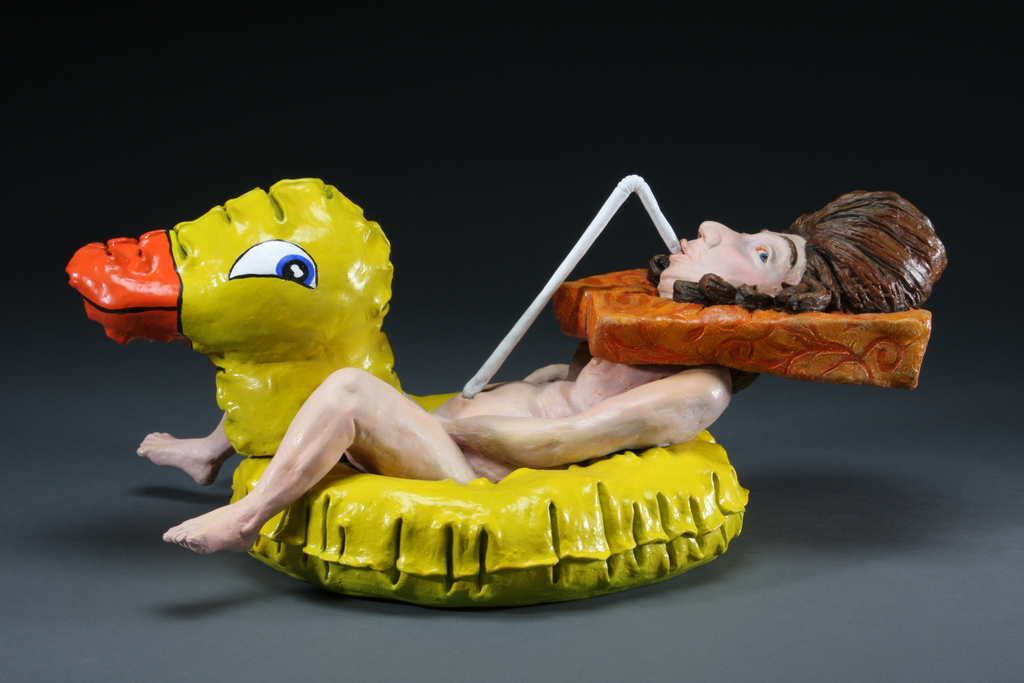 Charity Sharon White
Adipose Smoothie
Ceramics, underglazes, acrylic paint, magic sculpt
13"x13"x23"
While floating in childhood comfort she is both expelling and ingesting her past; loving and hating herself. Do it yourself liposuction. 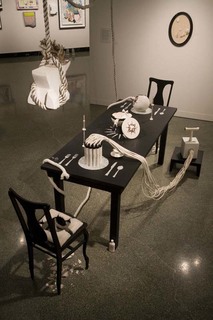 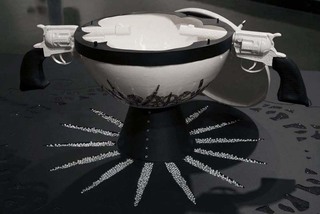 This installation concentrates on ornament in the domestic realm. The circumstances of this setting have proven unfortunate for the diners: The chairs have been violently rendered useless, an anvil hangs precariously over the guest of honor, blowgun candlesticks grace the table, and dueling pistols face off over the soup tureen. While these items exude a sense of the presentation of finely crafted, even delicate, pieces of dinnerware.

About the curator: I started my career in fine arts at Miami University under Prof. Susan Ewing. After receiving my B.F.A. in 2004, I continued my education as a graduate student at Indiana University studying Metals with Prof. Randy Long and Dr. Nicole Jacquard and received my M.F.A. in 2009.


Thank you everyone for participating in this exhibition. I hope it made you smile :)

The 2011 NCECA BiennialHeld in odd-numbered years, the NCECA Biennial is the premier juried exhibition open to all current members of NCECA (both national and international) and to all ceramic…Continue

You need to be a member of Ceramic Sculpture: On the Brighter Side of Things to add comments!

This is just what I needed today...something light after the Thanksgiving feast!

Comment by Brigitte Martin on May 4, 2010 at 8:28am
Who new ceramics could be so much fun :-) Thank you for putting this exhibition together. Very well done !