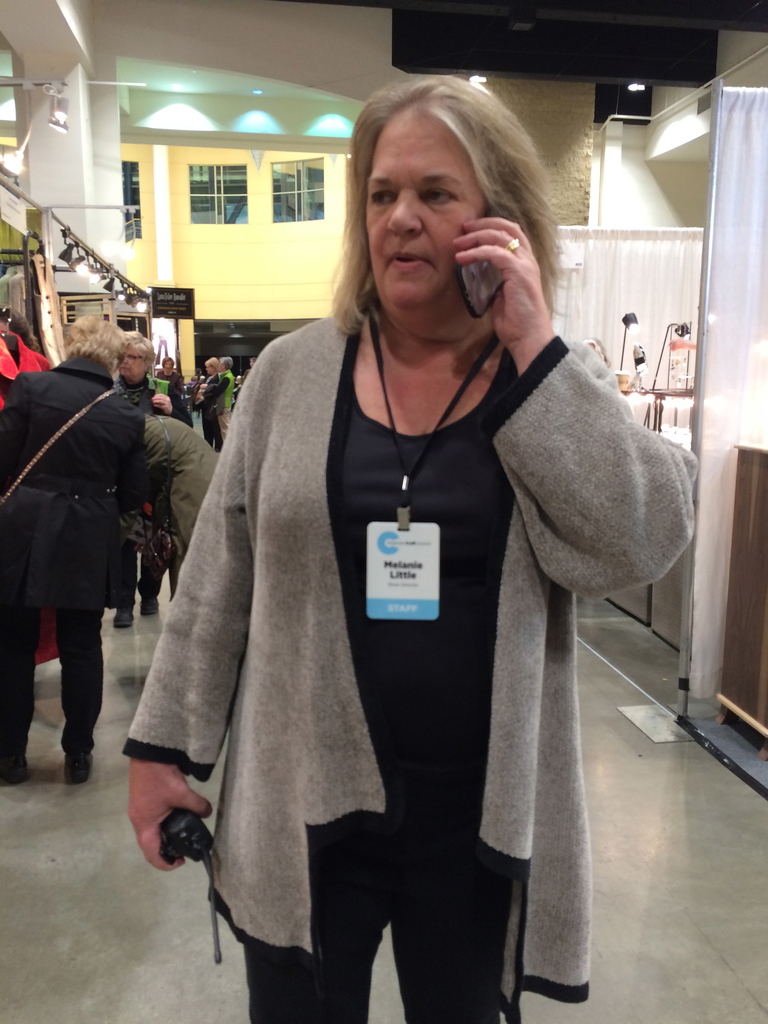 Photo B. Martin for crafthaus.

Crafthaus: How long have you had this job at the ACC?

Melanie Little:  I have been with the Council since 1985. I've first worked in accounting, then I became Show Operations Manager, and I've been Show Director now for about ten years.

Crafthaus:  That’s a long time. Did you move with the ACC from New York City to Minneapolis?

Melanie Little:  No, I didn’t. Many years ago, the show department had offices in Highland, NY. In 2004, the ACC decided to close those offices and move the operation down to Manhattan. I made the commute to the city for two years, which was a five-hour round-trip for me. That got old, so for the last eight years, I have run everything from my home office in the Hudson Valley, NY.  The whole organization moved to Minneapolis, but the show office stayed back in New York, and my show team is in a studio space in Brooklyn.

Melanie Little: I went to college for accounting and worked for a CPA for three years before I decided to go back to college. Initially, I wanted to go into teaching, but I realized that I really was a numbers person after all. I like that field and decided to get into private business. I worked for three years for an international trading company before I got my current job with the council, and I have been here ever since. Crafthaus:  How many people work in your show department?

Melanie Little:  Over the years the number of people working in the show department has gone down as technology improved. At this point I have a staff of two full-time employees and two part-time employees. In addition there’s Pamela Diamond, the ACC Marketing Director, who is situated in the Minnesota office. She is in charge of all the marketing efforts of the council, a great deal of her time is spent on marketing the shows.

Melanie Little:  In all honesty, before this job, there wasn’t a huge connection to craft for me. But then I met the artists and learned how wonderful they are, I appreciate the work they create. Over the years I've been able to buy things for my home, which I love. I love that personal connection, knowing the person who made the work.

Crafthaus: How many years has the Baltimore ACC show been in existence?

Melanie Little:  The Baltimore show has been in existence for forty years. Initially it was held at a different location, but it's been in the convention center for at least thirty, thirty-plus years.

Crafthaus:  The ACC organizes four shows all over the country. How would you describe the differences between the four ACC shows, besides that they're located in different places and take place at different times?

Melanie Little:  Okay, first I want to say that we run five shows, because I look at Baltimore as two shows. We run the wholesale show first, followed by the retail show. Baltimore is the one show that really stands out from the other three because of its size. We have a section of artists that are doing wholesale only, we have a group of artists that are doing wholesale and retail, and then another group that are just there for the retail end. I always joke that I feel like during the entire show, there's always a move-in or a move-out going on.

The wholesale show size is about 500 artists in Baltimore, and the retail show is about an average of 670 artists. So, it's really a large show. When you look at Atlanta and St. Paul, those run each at around 230 to 240 artists, and San Francisco, due to space limitations, that show has about 220 artists. Melanie Little and a customer at the 2016 ACC Show St. Paul. The customer bought a heavy piece and needed assistance with transportation. Photo: B. Martin for crafthaus

Crafthaus:  Are the shows different in style? When you have different locations one could assume that people in San Francisco have a different style, or different tastes than say, somebody in Baltimore. Do you think that’s true and is this reflected in the makeup of sellers in your shows?

Melanie Little: I would say that the style for all those shows is pretty much the same. We do have a good number of artists that work all four locations. So, I can’t really say that there's a huge difference between the show cities.

Crafthaus: So there's not some hipper, cooler vibe going on in San Francisco versus other places?

Melanie Little:  Well, I would say, yes, San Francisco could have a little bit more of the cooler vibe, I would agree with that. Not to a huge extent, but there is a little difference. Just in terms of where the show is held is also more unique. The other shows are in convention centers, whereas San Francisco is held at Fort Mason, which is the federal government’s old piers. You’re situated on the bay, looking out the windows at the Golden Gate Bridge and Alcatraz, and that does have a different feel to it. Crafthaus:  A few years back I had the opportunity to be a juror for one of your shows in San Francisco, I was a juror for “Alt Craft”, as in “alternative.” I haven’t seen that format since. Why is that?

Melanie Little:  We’ve done different things over time. What we’ve implemented in 2015, I think successfully, is our new Hip Pop program which we show at all our shows. We take a 20x10 feet space and create, for lack of a better word, individual pods. They're made out of compressed cardboard and six artists share the 20x10 feet space. Each pod is basically a four foot wide space with shelves.

We started this program to help bring in not just emerging artists, but also new artists that have never done our shows before. They are in a group environment where they can support each other. We do some training with them in advance and they're getting their pods for a lesser price than a regular 10x10 would cost them. This program is available to them for three years after which, if they feel ready, they can move into a regular show booth without having to be juried-in again. They can be in those booths for an additional three years. All in all, this is a six-year program for new artists, after that they have to go through the application process like everybody else.

Melanie Little:  I'm very happy to say that the reaction has been really positive. I know in the past, when we tried to do new programs like these, we put the new people all in one area, they were creating kind of their own booth space and it didn’t really look good. We did get negative feedback on that. So that’s why we came up with the Hip Pop pods. They're scattered throughout the show and they're a nicer looking display. Honestly, I have not had any negative feedback on these pods. I think the established artists understand that they themselves had some breaks along the way, and that we have to encourage getting new artists in as an older generation is retiring.
We also have what we call our “buddy program.” This is not just for the Hip Pop artists but for any new artist. Experienced artists who have done our show for years can volunteer to sign up to work with a new artist coming into the show. We’ve done that program for as long as I can remember and it really seems to help. We connect people, and they work their way through the process, helping each other. And that really does a lot for everybody.

Crafthaus:  The craft community is usually cooperative and people are quite generous with their time and advice, they want to see other people succeed. I can see how this is a good program.

Crafthaus: I received a question about the Hip Pop pods at your show in San Francisco that I am supposed to ask you. Someone noticed that the local San Francisco Fire Department sprayed loads of fire retardant on the cardboard booths which left the cardboard look blotchy and soggy. Can you tell me what happened?

Melanie Little:  I know what you are talking about. Here’s the story: The San Francisco Fire Marshall changed their fire codes on us, and as a result all SF booths had to be sprayed with retardant, including all cardboard Hip Pop booths. They went totally overboard last year, I agree, and we addressed this issue with them, as you can imagine. They will always spray retardant because they must adhere to their fire code, but in the future they will be more careful and spray much less. 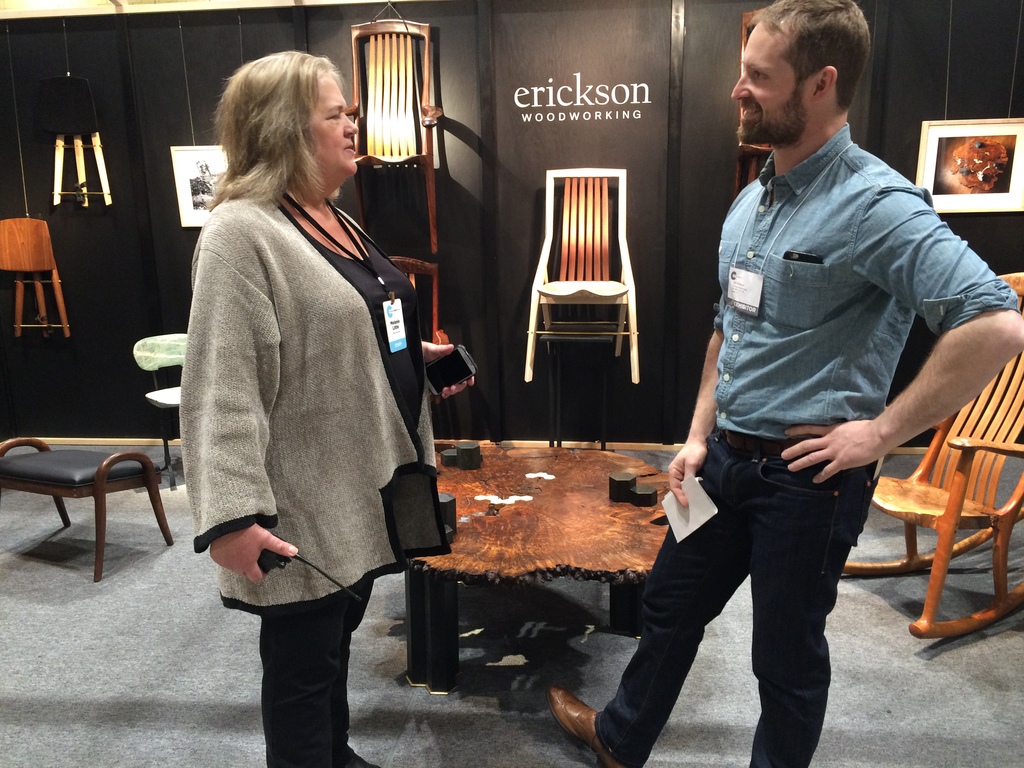 Melanie Little and Tor Erickson in the Erickson booth at the 2016 ACC St. Paul Show. Photo: B. Martin for crafthaus. Artist website: http://www.ericksonwoodworking.com/

Very good insight, I'm happy to read views from this point of view. Thanks.

Permalink Reply by Heba Barazi on April 21, 2016 at 8:56am
This is so informative. Thank you Brigitte for doing this!

Thank you, Heba. That's exactly what it's supposed to be, helpful. I am glad.