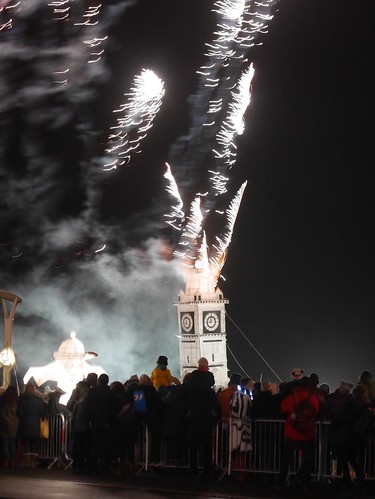 SO, it is 2015 and I've not made a post for almost a month, which is most remiss. First of all, I wish everyone a happy and successful 2015 and hope that we can overcome what has not, generally, been a particularly auspicious start to the year, especially in France.

I've just got back from my winter holidays in Brighton, which was great as ever, starting it all off with a big bang in the form of the Winter Solstice celebrations on the beach there, known as "Burning the Clocks" - I've no idea and probably neither do they, but it is great fun!

We don't really engage with "Christmas" at all - this year there were not even any presents, though Dingo did manage to find a way to play a traditional Christmas tune on green beans...

Apart from eating too much, I did get over to Folkestone to see the Nicola and Chris at Cursely & Bond where we discussed a potential and very exciting project which I now can't tackle until April... more in due course. I also managed to get to London, where I collected a brilliant shirt which I had commissioned from Susannah Hall: 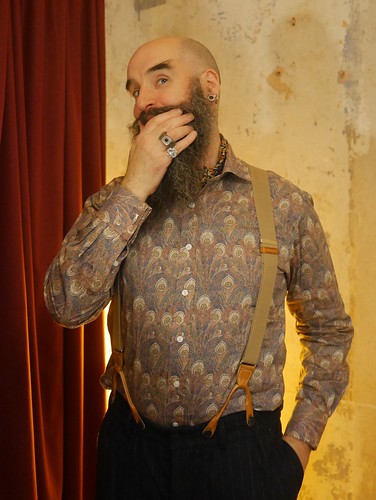 This came about because last summer, Madelyn Smoak and I were in Liberty in London and I was looking at all the shirts in the classic Liberty prints... all the prints except my favourite "Peacock". Madelyn asked about it and the assistant couldn't understand why they weren't available but also couldn't offer to have one made. Much later, Susannah posted on Twitter that she had made up some shirts in Liberty prints and I asked her to make one in "Peacock". I had imagined - and so had she - that it was going to be the most famous turquoise pallet, so it was a real delight when this arrived instead. I would have been happy with turquoise but love this one. Dingo took this photograph and I've no idea what I'm doing.

Back in the workshop on Monday and a marathon to complete some orders and to make some new stock for Cursley & Bond. I also got home to find that the 3D wax prints from Shapeways had arrived and sprued them up for casting. This is the first time I've had wax prints from them and the quality is amazing: 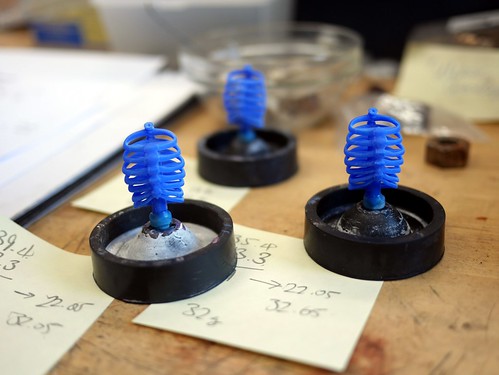 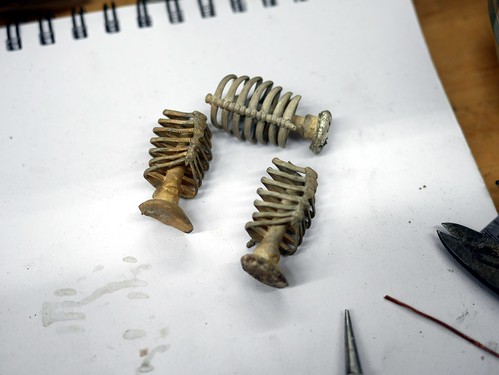 While I was in Folkestone, I met with another artist in the Creative Quarter, Russ, the illustrator who runs "The Dirty Pen" studio there. His father had been a builder and had made his own pointing tool from an iron window stay and Russ asked me to make this into a piece of jewellery which he could wear as a memorial to his dad: 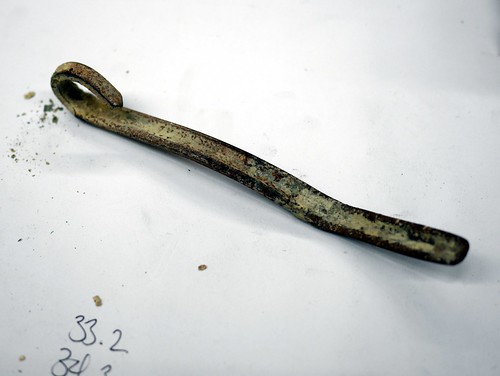 We agreed that it should be made into a bracelet and that is now the main project left on the bench: 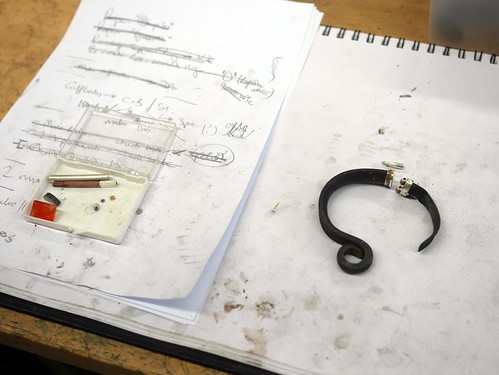 Other than that, the piece I with which I am most pleased is this pair of cufflinks, made from number nails I found in Denton, Texas, during my visit there last October and set with diamonds: 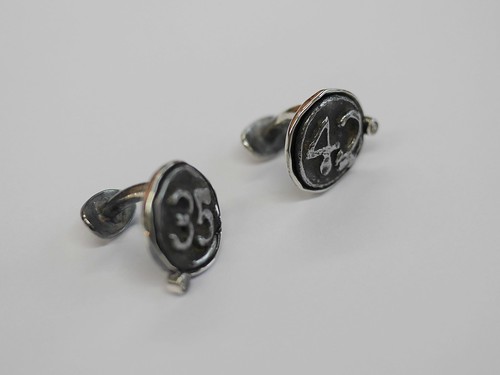 Over the weekend, I took the opportunity to go on the superb tour "behind the scenes" of Glasgow's enormous Central Station, learning about the history, the mysteries and the horrors which lie hidden under, between and over the platforms. Led by Paul and Vic, both officially station historians, they took us on what was definitely the most interesting and entertaining tour of this type that I have ever been on and this has got to be high on the list of "must see" attractions in the city. 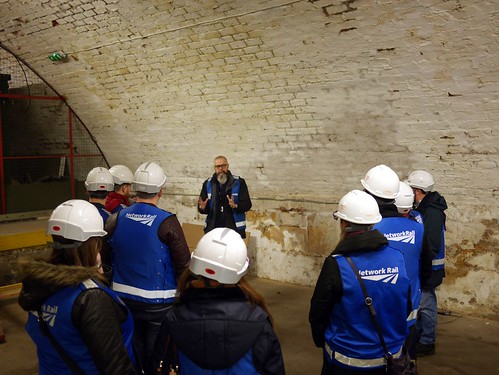 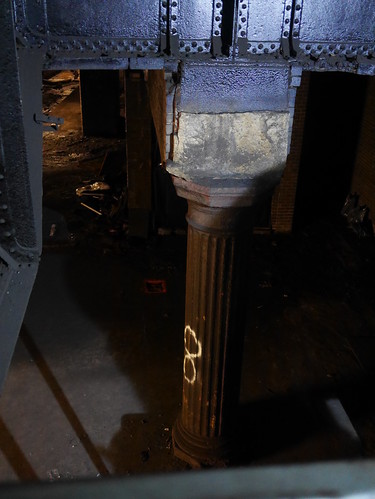 There are other, different tours coming, including a tour of the remains of the village which was destroyed to create the station - Grahamston - and one of the Beeching-cut "Platform 8" which is shown above and which is at an even lower level than the existing low-level trains. Exciting! I'll be booking for sure. You can book here if interested.

After that, it was off to Edinburgh - by train - to meet with Jeff Zimmer to take in a couple of exhibitions and to discuss our forthcoming collaboration on an exhibition piece. We went to see the all-too-brief exhibition at the National Portrait Gallery, "Beauty By Design: Fashioning the Renaissance", an amazing show which looks at the portrayal of beauty in Renaissance portraits in the collection and invites contemporary artists in Edinburgh to re-interpret those ideas. 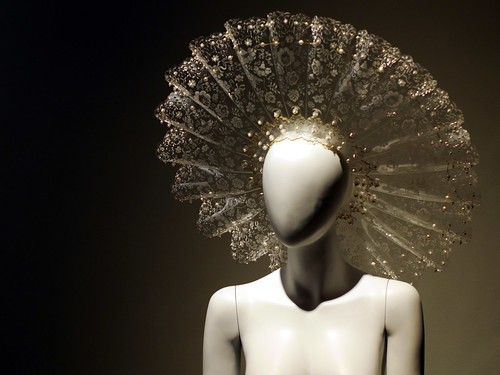 This is a remarkable, moving show. The pieces by the contemporary artists are incredibly subtle and although the show only really has four exhibits, it makes a deep impression. "Leave them wanting more" was never more true than here! 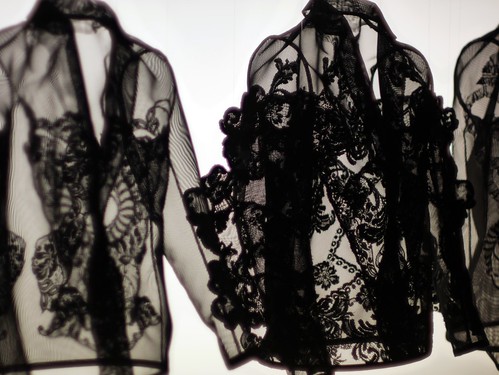 Also well worth seeing in the same venue is the BP Portrait Awards and an exhibition of photographs and ephemera around Johannesburg's infamous "Ponte City" housing block.

A flying visit to the Fruitmarket Gallery introduced me to the remarkable photography and film-making of Canadian artist, Stan Douglas, followed by an even shorter trip to the Ingleby Gallery to have a fleeting look at their "Billboard for Edinburgh" show. Too much for an afternoon!

The real reason for visiting Edinburgh and meeting with Jeff was to talk about our collaboration. For years, I have wanted to make a piece of jewellery inspired by one of my favourite films, Peter Greenaway's "The Draughtsman's Contract". My main interest in this film was primarily musical, with a Michael Nyman score which interprets my favourite composer, Henry Purcell, but the more I've watched the film, the more it has grown on me and the more I've understood the dazzling language, the symbolism and the complexity, so much so that I really feel the need to respond to it with my own work. Central to the film are ideas about "seeing" and ways of seeing and so when I found a load of unground spectacle-glass lenses in Creative Reuse in Pittsburgh a few years back, I bought them with the vague idea that they could be used in this piece.

It wasn't until the subject came up in conversation with Jeff and his partner, Mark, who also shares a passion for this film, that we considered the idea of collaborating - originally for the Crafthaus exhibition, but that is not looking possible now - and I suggested that he uses his techniques for painting glass on the lenses (the film also discusses painting extensively, elaborately distinguishing between "painters" and "draughtsmen").

We spent last night watching the film and discussing our ideas... 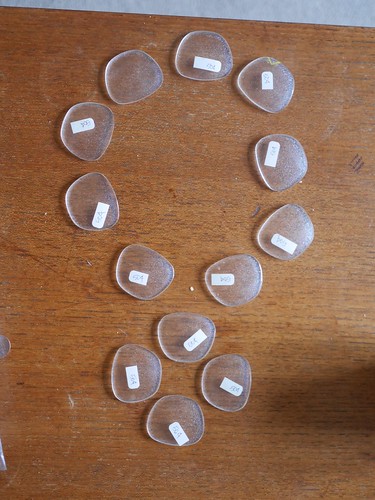 Thanks, Brigitte! Glad you enjoyed it.

Good to see Dingo again! Nice tune he popped out of those beans :-)