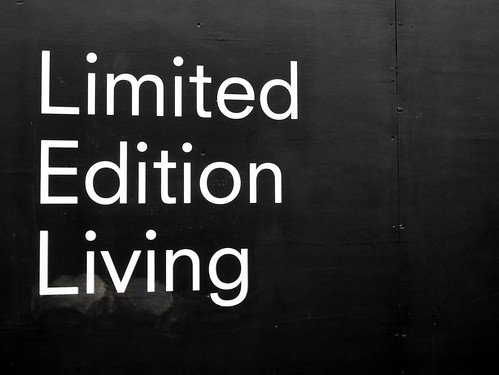 In a week dominated by Trump and other fascist excesses, this terrible marketing puff for - believe it or not - flats in the Jewellery Quarter in Birmingham struck me as desperately appropriate. On another week, I might have mused on the hilarity of a speculative builder inadvertently commodifying death but I will leave the musing to you this time.

I am not going to dwell on Trump but will link to two essays which I think are important. The first is by Masha Gessen of the New York Review of Books on why we must NOT compromise and attempt to work with him but must vociferously oppose him every step of the way (also applies to the UK leaving the EU and our own sad little fascists): Autocracy: Rules for Survival. The second is a positivist manifesto by the marvellous thinker and musician, Brian Eno, in which he states something similar but less bleakly: Trump Is A Wake-Up Call.

On Wednesday morning, I had to cycle to the University "Curzon" campus in town. It was icy cold but sunny and the ride was pleasant. At the campus, I got into the lift with a woman who commented that I "looked cold" but as I'd been on bike, I wasn't at all cold. She came from West Africa and thought that she would never get used to the cold and was laughing about the fact that the weather forecast was for snow. She got out the lift and I continued to the top floor.

I don't ever want to be in a position where these everyday interactions stop. My life is better for having an irrelevant chat with a woman from West Africa. It is a privilege to have spoken to her, to a Norwegian woman, to a student from Lithuania, another from Israel, and to a vegetable-seller from Afghanistan, all in the course of one week. I am proud of the fact that they have come to Birmingham for whatever reason brought them here and that they are comfortable enough to talk to me as freely as the people who were born here would speak to me.

I am prepared to fight long and hard for that privilege.

It is two weeks since I last posted - I didn't get time last weekend as I was in Brighton - and so much has happened, so speeding rapidly backwards to a time before 'Orange was the new Black', the BA Jewellery and Related Products students had a small show to look at the work they are developing for their final graduation shows and it was very exciting to see what is coming: 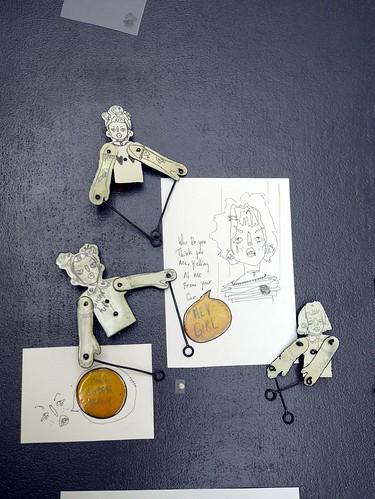 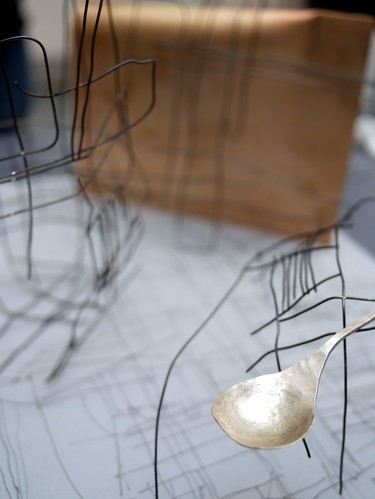 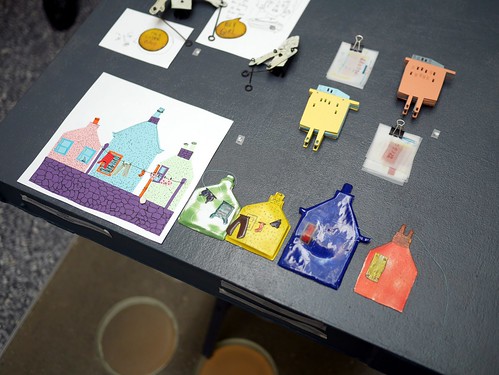 One piece which intrigued me particularly was not jewellery but a manifesto by Rachel Jones: 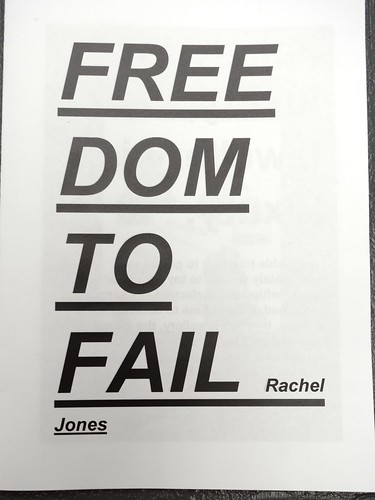 (Looking at this and at the poster at the head of this entry, I realise that the influence of Jenny Holzer is everywhere!)
The content of this manifesto caused me to think rather a lot and to gradually question the content: is "failure" a luxury? Contextually, in terms of the University, studying jewellery, being in a space where one can safely fail, then yes, it is a luxurious position: in terms of human achievement, it is the only way progress is made. I have always questioned the idea that jewellery is a luxury, an inessential - I believe it fulfils some deep-seated psychological need for decoration (which is why I also think that 'minimalist design' is a cultural dead-end) but there is definitely a question around luxury to be answered. (See my post from this time last year on the superb "What is Luxury" show at the V&A.)

Anyway, I emailed my thoughts to her tutor, Rachael Colley, and she passed the comments on which led to me having a lunchtime meeting with Rachel herself and a long, rambling, wide-ranging discussion about such varied topics as Class War, Hyperreality, Naomi Klein, Umberto Eco, Deyan Sudjic, Jean Baudrillard... I cannot wait to see her graduate show!

Next up was a design development day which was more of a drop-in to which students could come along if they felt so inclined. My colleagues, Rachael Colley and Sian Hindle organised a "Drink and Draw" tea-ceremony, where hand-made brushes, pens and other tools would be used to draw with tea in various forms whilst supping the same beverage (and eating home-made cakes). 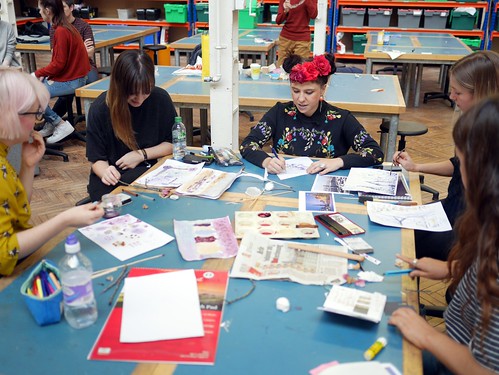 Rachael has been experimenting with making brushes for some time now and it was good to see the students engage with her practice. 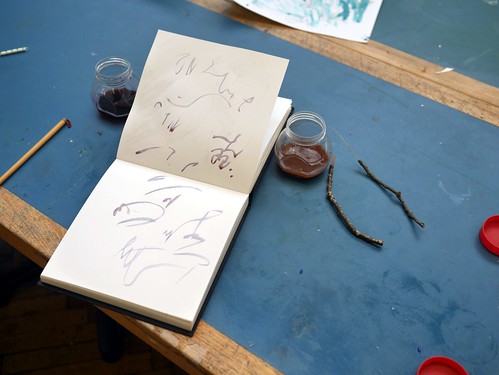 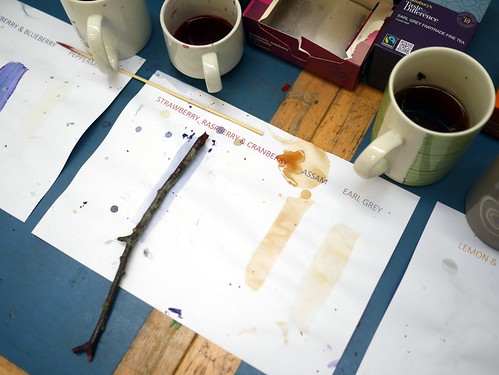 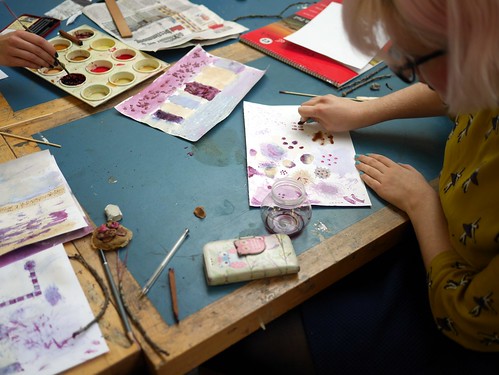 I noticed this week that the "Forward Rolling Mills" - where I had found all the materials for my "Run of the Mill" work for Craftspace - is almost completely demolished: 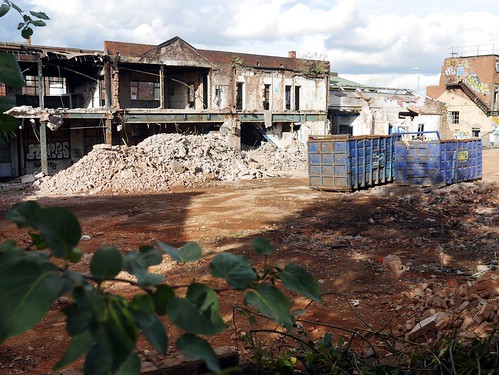 With a lovely circularity, I finished my work for Craftspace with a piece for their permanent collection of handling pieces: 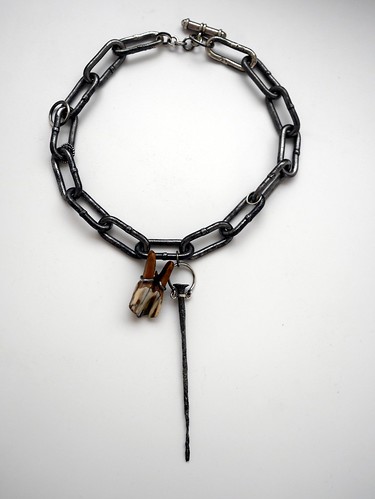 With colleagues, we headed off to Grand Union for an exhibition of work by Mitra Saboury. Saboury's work reminds me a lot of the work of Matthew Barney but with a very different focus and a lot more roughly-hewn. (In fact, it did make me question the style-over-substance issues in Barney's work again.) Her work is pleasingly odd, very visceral and hovers somewhere between horrible and hilarious and it was interesting that we all had very different feelings from each of the pieces presented. 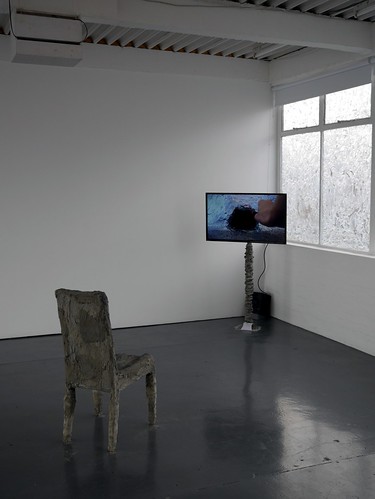 On leaving, I spotted a tiny remnant of Matt Gale's installation from some months ago, abandoned on the stairs: 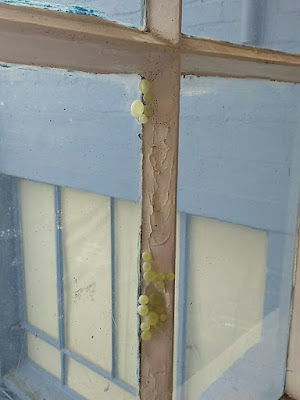 Tiny glow-in-the-dark silicon "fungi"! Matt has been doing some work at the School recently, which is how I came to know his work.

Installed my little one-case show at the Birmingham and Midland Institute last week. The B&MI have been running a rolling programme of work by the artists at the School of Jewellery and this month it is my work which is going into the case: 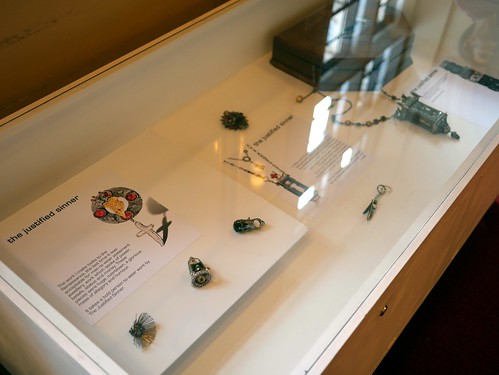 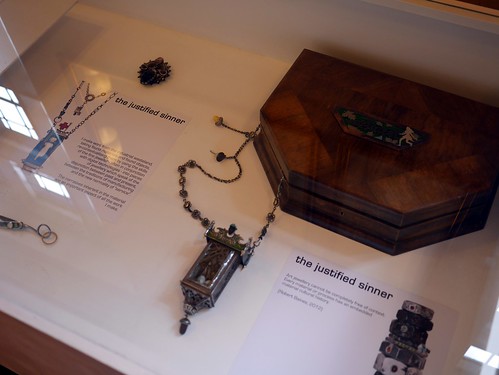 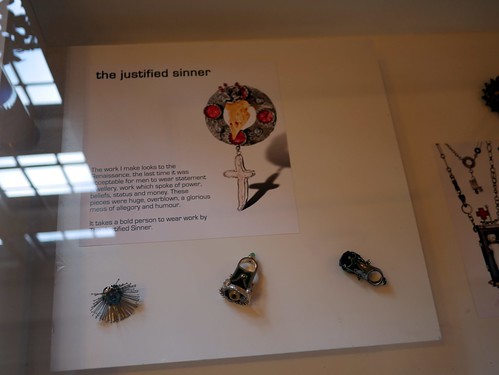 This week saw the display by the first-year BA Jewellery and Related Products students of the first things that they had made in the workshops, their "Pots of Joy" and some stone-setting samples. 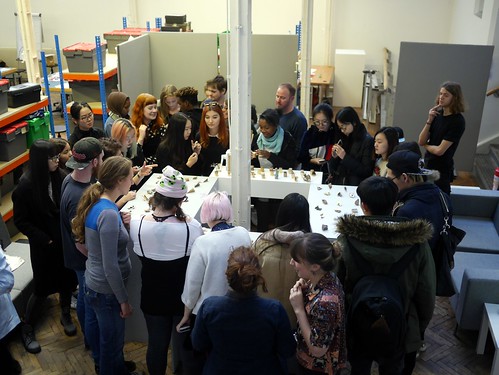 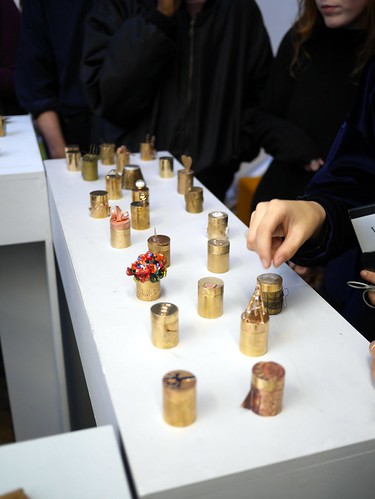 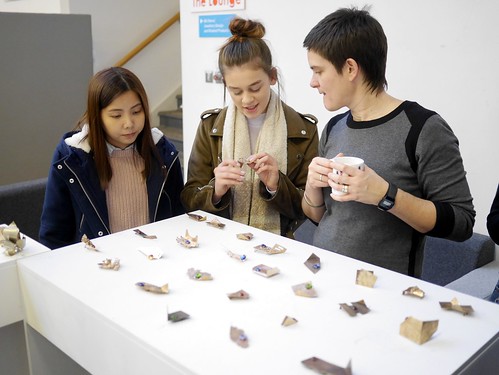 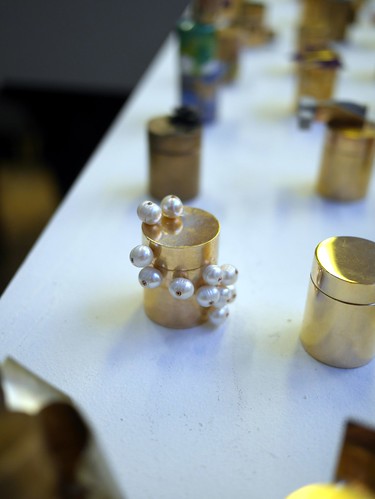 Last night, I went to Lustre with my friend and colleague, Anna Lorenz. For those of you who don't know it, this is a superbly-curated and well-organised "craft fair", though that does not do it justice at all. The quality of the venue and the products being displayed is of the highest standard and the focus is on the very best and most interesting craft products being made in the UK. 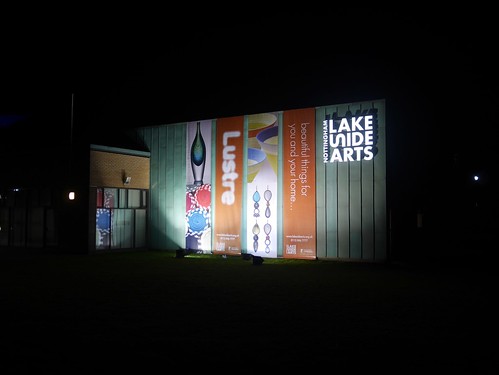 It was really nice to see some of our graduates there: 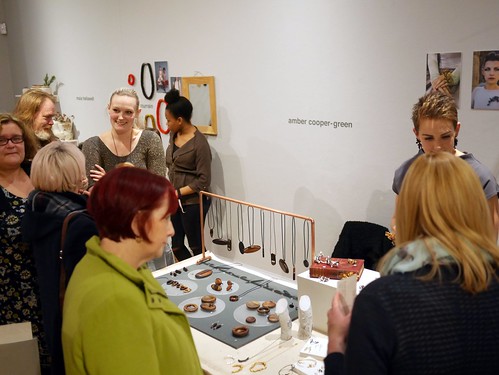 You may recall that I bought one of Amber's brooches at her graduate show, so it was really nice to see her new work in this context. 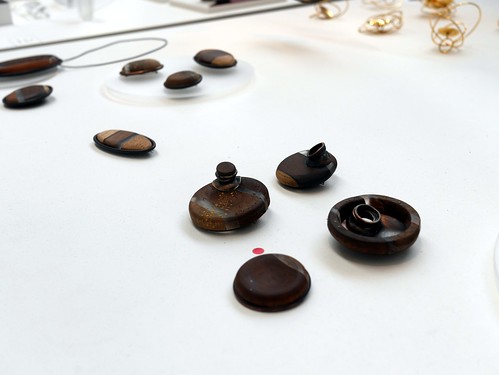 We were also there to support Sally Collins and Drew Markou in their really interesting collaborative project, "Studio 100". This saw them creating a body of new work which was inexpensive but which didn't compromise on their individual aesthetics. They also agreed on colour pallet and scale so that the show works as a whole. 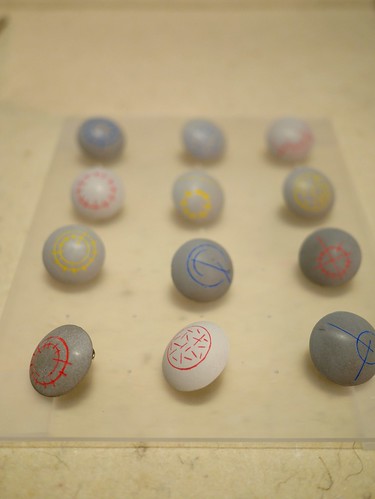 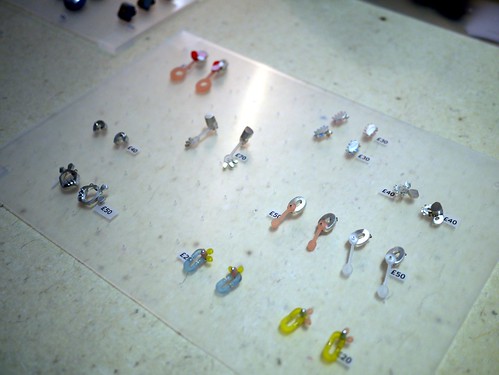 I think that the whole works really well. 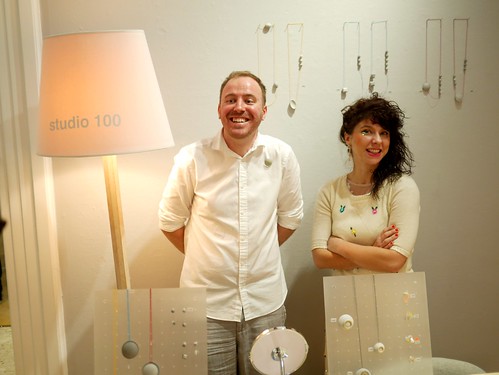 Last but not least, as a fan of social enterprises, I was delighted to discover that the excellent Patrick Grant (of Sewing Bee fame!) is the brains behind a new Blackburn-based co-operative, Community Clothing, making modestly-priced, quality clothing. On the recommendation of one of my favourite fashion bloggers, Grey Fox, I bought a pair of their jeans and have to say that they are quite wonderful. I wore them last night to go to Lustre: 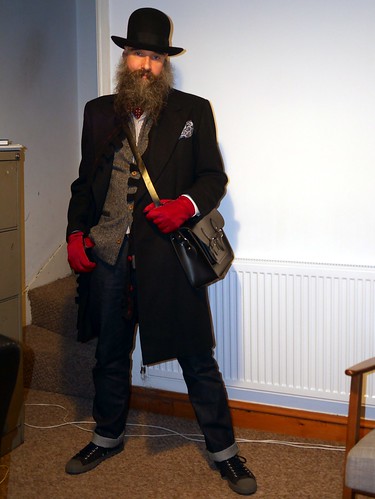 Made from heavy, selvedge denim, these are very well cut and beautifully made. I can tell that they will really improve with wear. So good to find an exciting enterprise like this.
An aside to this, I really like the way that Community Clothing have modified the classic British Utility Clothing logo for their own use!