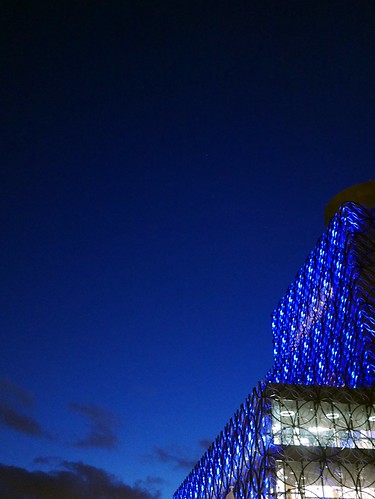 A musical week, mainly, kicking off with the astonishing world-premiere performance of Gerald Barry's Organ Concerto by the CBSO, conducted by Thomas Adès. Part of the most satisfying programme of music I've encountered in a long time, kicking off with Britten's "Sinfonia da Requiem": I've struggled with Britten for a long time and just gave up even trying to understand or enjoy his music sometime in the late 1980s, so it was interesting to hear this piece again after avoiding his work for so long and finding that I really enjoyed it. Time to re-appraise.

The main event, for me, was the Gerald Barry piece, which didn't disappoint. A riotous mess of sound, infuritating, funny, cantankerous and thrilling. It is hard to explain how the piece actually worked and I wanted to hear it all over again the second it finished: it is broadly programmatic and deals with the composer's early years working as a church organist but that is all gleaned from the hilarious programme notes, which include this image:

There are always unexpected triggers in writing. For instance, I know a cat who lives in Washington Square in New York. His name is Blue Gadoo and he's a very peculiar cat. I saw a photograph of him in a book called "Sex and the Sacred in Wagner's Tristan and Isolde". By his expression, I knew he was mourning the loss of atonality. So I put his fight for atonality against tonality into the concerto.

This was followed - after an interval to allow us to recover - by Adès' "Polaris", beautifully realised with the distant brass on the very top tier of the Symphony Hall, and Stravinsky's "Symphony in Three Movements", all superbly played. 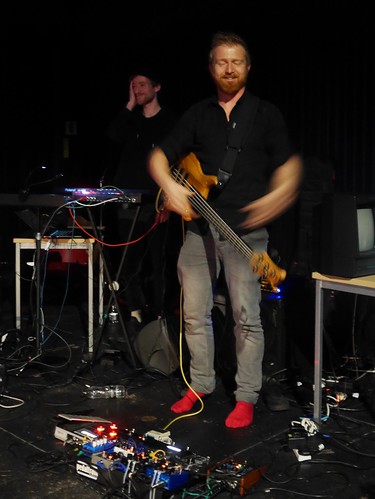 Friday night brought a visit to The Lab at the Royal Birmingham Conservatoire, the experimental music space with sound-spacialisation technology, to hear bassist Chris Mapp's "Gonimoblast" and "Stillefelt" perform in a remarkable concert. Stillefelt Trio were up first, a gentle, meditative concert which felt like a showcase for the exquisite trumpet-playing of Percy Pursglove, not only a master of "Sketches of Spain"-era Miles Davis tone, but also of an holistic approach to extended technique. Quite wonderful. 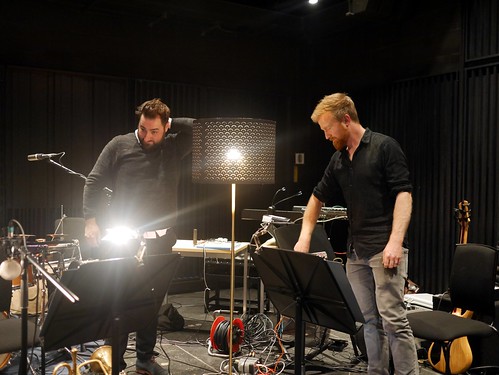 Gonimoblast are a quartet of players, including percussion, electronics and keyboards, who were augmented by a brass section of five players on trumpets and trombones and who managed to make one almighty, exciting noise, part-composed, part improvised, the brass functioning - as Mapp explains in the notes - as an "ensemble within an ensemble". 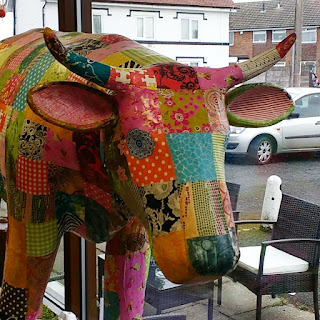 Pursuing my casual interest in marginalised crafts, I headed off to "The Crafty Cow" in Castle Bromwich to meet with Kiarna of "House of Macrame" for a lesson in... macrame! (No sniggering: The Guardian, in 2016, declared, "Macrame Is Hip Again".) 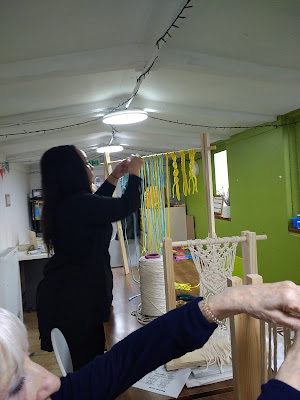 This was a tiny class - just three of us - and I really got into it. I hadn't realised quite how meditative it would be and I found myself really, really enjoying it. We started off with a simple series of knots: 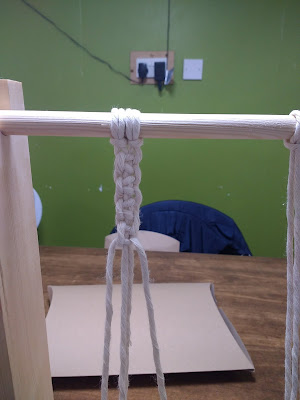 By the time I had learned the "Monkey Head" knot, I was away! 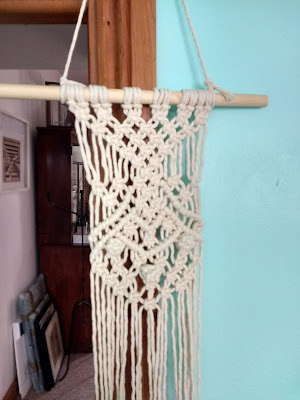 Plant-holders next!
Anyone interested should get in touch with Kiarna as she is running the classes regularly. 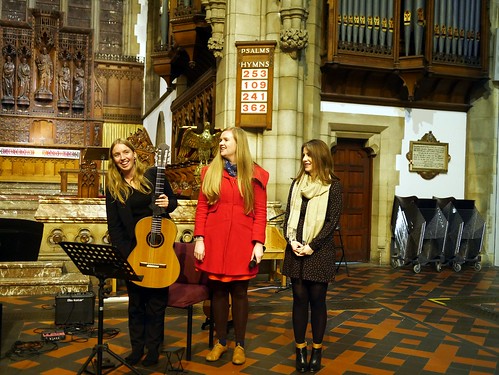 Saturday night brought another concert, this time one in keeping with the week in which International Women's Day falls: a concert of music by women composers, played by women musicians. "Illuminate" is organised by Angela Elizabeth Slater (in the red jacket in the photograph above), a composer herself.

Of the composers featured, I had only heard of two previously (three if you count Claude Arrieu, the gender of whom I had mis-attributed!) - Yfat Soul Zisso and Lilli Boulanger - and, if I am being honest, I struggle to think on many female composers... Gloria Coates, Ethel Smythe, Judith Weir, Hildegarde von Bingen: that is four off the top of my head but I could reel off literally hundreds of male composers.

The concert was fantastic - a selection of fourteen pieces by eleven composers, some contemporary, some historic - all tiny chamber works which gave the event the feel of a "tasting menu", a superb way of getting a feel for the composers. It was performed superbly by Késia Decoté (piano), Cassie Matthews (guitar), Sabina Virtosu (violin) and Gemma Mcgregor (flute/shakuhachi).

Looking forward to more in this series.

After my post two weeks ago about re-reading Don Delillo's "White Noise", I've now finished that and started on Alexander Langland's "Cræft", an investigation into the meaning of craft. I've only just started - kicking off with an account of the wisdom of Alfred the Great - but can already tell that I am going to enjoy it. 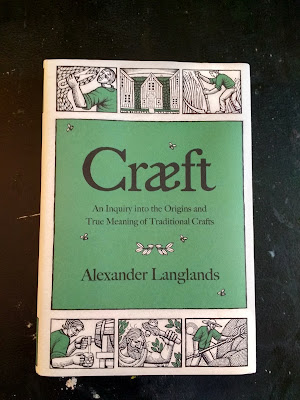 Some months ago, I sponsored the legendary Czech film-maker, Jan Švankmajer, to make his last film, "Insects". I've loved Švankmajer since I saw "Dimensions of Dialogue".

This film is compelling, funny and disturbing, and, as I subsequently found out, this is the pattern for all his work. His work has influenced so many film-makers, most notably the Quay brothers, and his influence can be seen in television adverts, cartoons, serious films, pop-music videos (The Cure seem to have been especially keen).  When the opportunity to help fund his "last film" came along, I seized it: yes, it is sad to know that he will not make any more films, but it is also exciting to have been able to help him realise a vision.

Last week, an email arrived in my inbox: "Insects" is finished and now available for me to view. Of course, I viewed it. Needless to say, I can't share the video here but you can see the trailer in which Švankmajer explains a little bit about the incredibly complex film, a film about a film about an amateur dramatic group rehearsing an obscure Czech play...

The film is very different from his other films in that it is also a sort of documentary about the making of one of his films. There are some genuinely horrific moments but also some hilarious ones - who would ever have imagined that vomiting up a cockroach could be funny? - and the whole thing is as demented as I could have hoped. If you get the chance to see it, do.

In addition to this access to the film before it has been generally released, I have also a signed book of the script and a collection of all his films on disc to look forward to!

I will leave you with another of his marvellous short films, "Jabberwocky" from 1973:

I did a little macrame growing up. Those were the 70s, I guess. I am happy you find it relaxing/soothing. I totally get that. Looking forward to seeing your next macrame project !!

I loved the macrame! Who would have thought. I've yet to get started on a project of my own, but that will happen soon.

Jabberwocky is very typical of his work. Insects has more live action with interspersed animations in that style.

I don't really know what to say about the JABBERWOCKY movie. Geez.

That macrame "thing" is true in the US as well. Glad you enjoyed it!