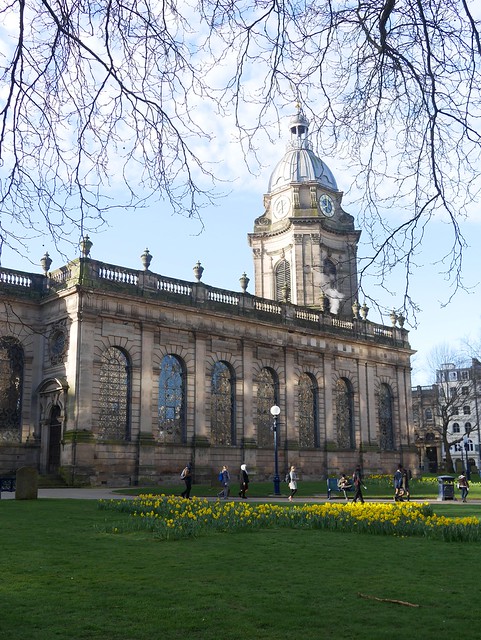 Spring has just about got to Birmingham this week and on Wednesday night it was a pleasant - almost warm - walk to the IKON gallery for the private view of the new show of work by two very disparate artists, Jean Painlevé and Oliver Beer. 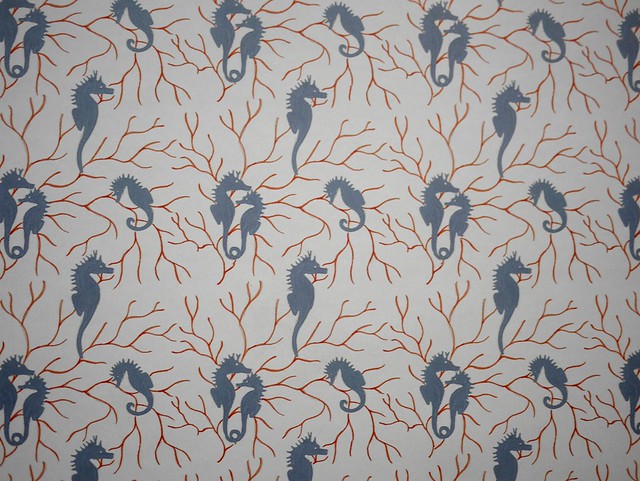 Jean Painlevé was an artist and scientist, working with film, photography and other media, including jewellery and he was associated with the surrealists. His main enthusiasm was for sea-horses and marine life and he even invented cameras which could be used to take the images and make the films for which he is now famous. This, surprisingly, is the first solo exhibition of his work. 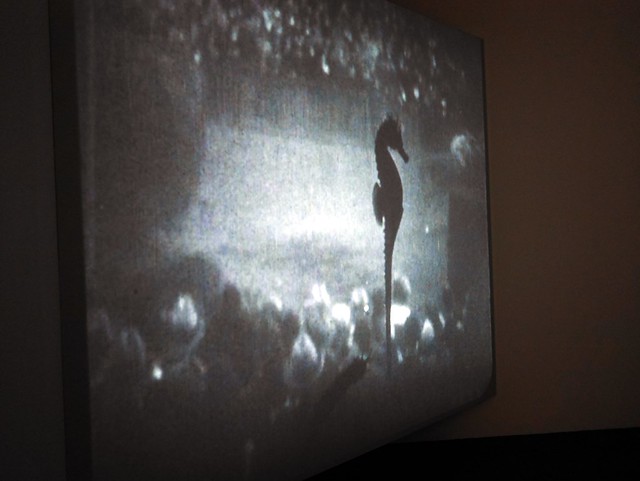 The opening was really busy and it will be interesting to go back and visit the show again as the films have soundtracks by early experimental electronic musicians such as Pierre Henry and it was not possible to listen to the soundtracks or view the films properly.

Some of the students from the MA Jewellery course will be taking part in the exhibition, making work in response to it, which seems appropriate given the jewellery aspect of the show. 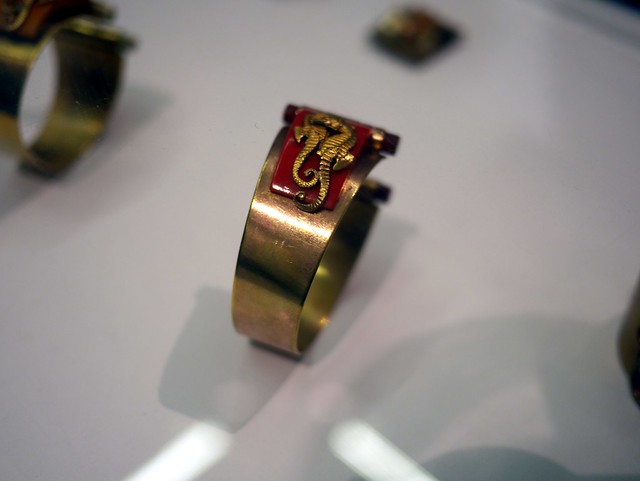 I'll report on this response in a later post.

Oliver Beer is an artist who also works in film and sound although I have to say that any link in the minds of the curators/programmers who put these together is actually lost on me. This is not to say that the two shows are not excellent: they are both superb. Beer's work is disparate and complex but has the power to amuse and engage, especially the sound-piece "Making Tristan", in which various ceramic objects are caused to resonate and generate Wagner's "Tristan Chord". 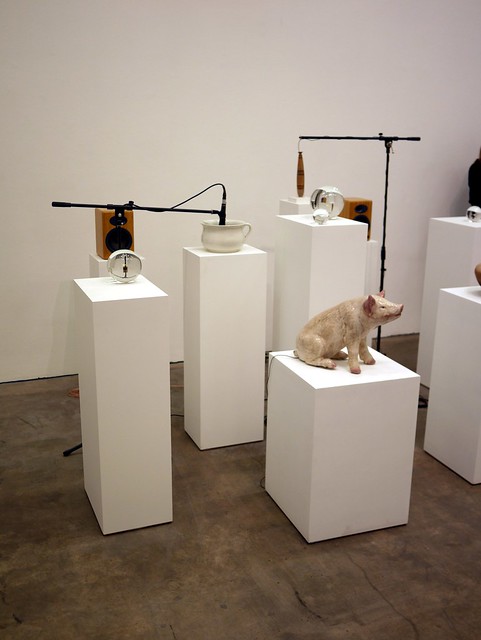 That the items resonating include a porcelain pig and Beer's grandmother's chamber-pot, lending a touch of surreal humour to the piece. His grandmother features again in the exhibition in the touching "Oma's Kitchen Floor", a piece of damaged linoleum which records the daily trace of her life in her kitchen.

My own favourite piece, however, has got to be "I Wan'na Be Like You" in which the artist re-animates the famous scene from Disney's "The Jungle Book" using drawings by 2500 Birmingham children of all ages: and despite the main film being fantastic, the titles at the end are the best bit! 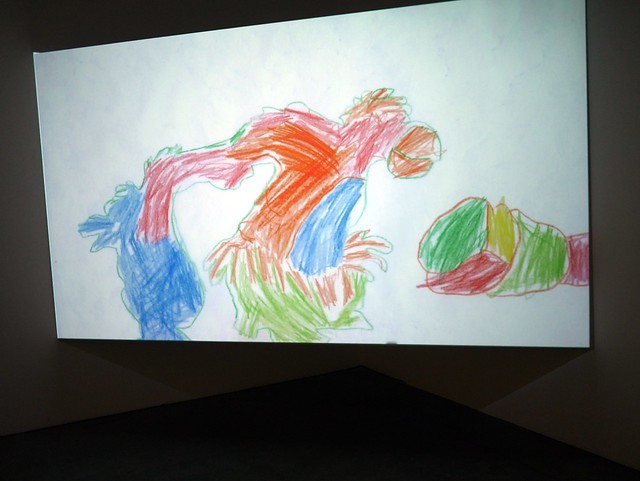 Friday lunchtime brought another lecture by Sabina Stent about women surrealists, this time the overlooked Emmy Bridgwater, one of the Birmingham Surrealists, held at the Birmingham and Midland Institute, which was good as it meant that I could have a chat with Connie again and compare notes on how much weight we put on as a result of fondue last week! 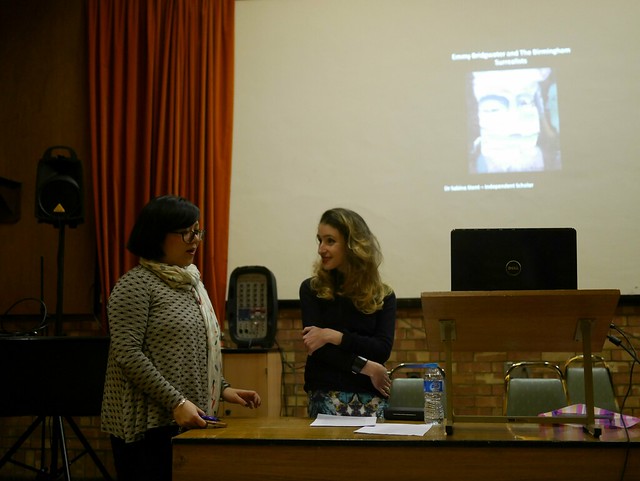 I'm really delighted that the breadth of the British Surrealists are becoming more recognised, especially the role that the women played in the movement. Certainly, within European Surrealism, the women were too often reduced to the role of "muse" without necessarily being recognised as artists in their own right (Sabina cites the role of Lee Miller in the work of Man Ray as an example).

Friday night brought a concert.
If you've been following this blog for a while, you may recall that in summer of 2014, I went to hear Scott Bradlee's Post Modern Jukebox ("Today's hits, yesterday") and thought that they were rather good. I've been a fan of PMJ since I discovered this bizarre and hilarious video on YouTube in 2010:

Mr. Bradlee's sense of humour and prodigious musical talent kept me coming back for more and from these odd little piano-based vignettes (all of "Pulp Fiction" in five minutes or "Bohemian Rhapsody in Blue", a mashup of Queen and Gershwin) kept me intrigued and I watched the growth of the Postmodern Jukebox project with great pleasure as it became more and more sophisticated, involving ever-more-talented performers: it is the quality of Bradlee's collaborators which makes this band much more successful than the average covers band - in fact, probably unique among that (unfairly) slightly-despised genre. 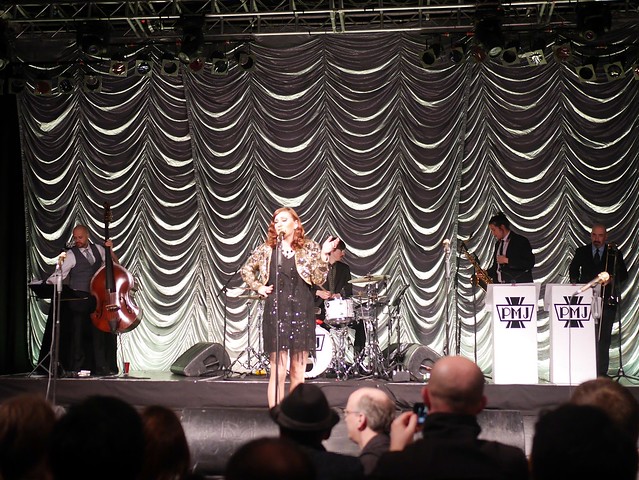 This gig was, without a doubt, one of the most joyful I have ever been to - far exceeding their previous performance - held together by the saucy badinage of multi-talented Ariana Savalas, quipping about the freezing, wet weather, "No wonder Adele is so miserable" and flirting outrageously with some bloke from the audience, "I love plaid. Is that from the reduced section of TK Maxx?". The addition of Ariana moved the whole performance from the realms of being merely a gig and into the world of Cabaret. Add to that the incredible skills of the performers and the obvious fact that they, too, were having enormous FUN on the stage and you have something irresistible. The audience lapped it up and the atmosphere was brilliant. 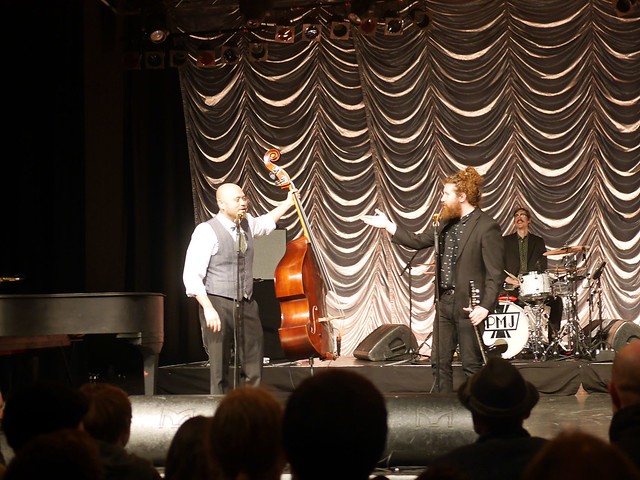 Even the most dire crap of a song (Britney Spears' "Womaniser", for example) can be treated by the PMJ in such a way that it makes you wonder how the original got it so wrong and when they tackle an already excellent song (Radiohead's "Creep") it becomes sublime. From Hanson to Fountains of Wayne, the five singers (two male, three female), tap-dancer, drummer, bassist, clarinetist, trombonist and pianist swung their way through a non-stop two-hour set and nobody wanted them to stop. 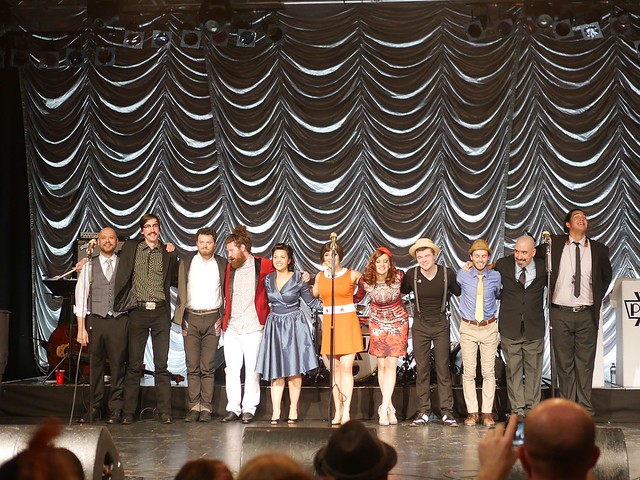 For sheer, unadulterated, silly pleasure, here is Aubrey Logan performing "Give it Away" by the Red Hot Chilli Peppers:

Worth having a listen to the PMJ Youtube channel too! 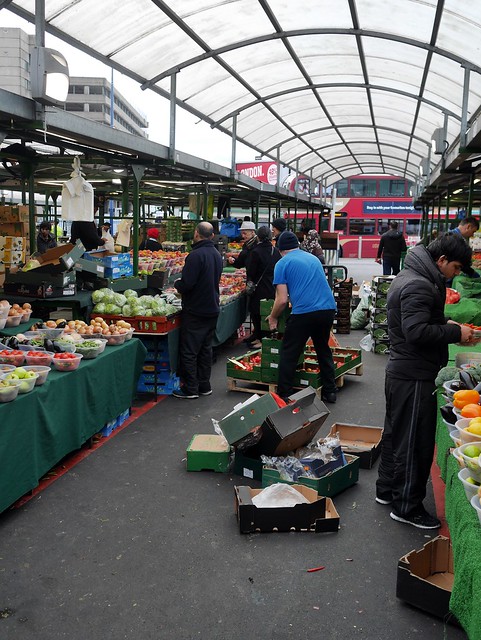 Saturday was an slightly unusual visit to the produce market at Digbeth. I normally go to the market on a Saturday to buy my vegetables and cheese for the week but this week, I went with the purpose of recording a "Soundcloud" piece for John Wigley of the Birmingham School of Art for his collaborative practice "Hidden Cities" project. For the project, various teaching staff from around the ADM faculty at Birmingham City University record a voice piece on location at a place which might normally be overlooked. It can take the form of a narrative, or of an interview.
Mine will be uploaded soon. 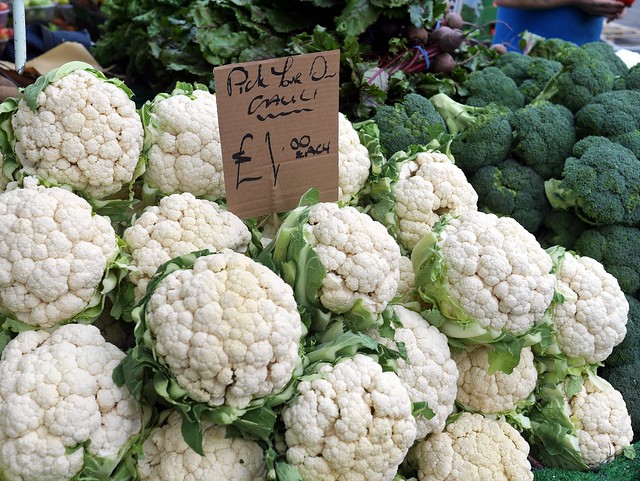 I finally, after years of having wanted to see it, managed to watch "The L-Shaped Room", a film which has influenced many aspects of British culture, from other film-makers to Morrisey. It is funny, touching, desperately sad and, ultimately, bleak. On the back of being very impressed by the film, I decided to read the book and have to say that this is probably the first time that I've felt that a book is somehow less than the film made from it. 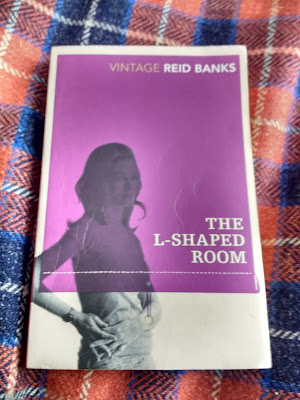 The film strips everything back to the essentials and removes the rather grating deus ex machina which softens the end. Having said that, the characters are more rounded, more developed in the book but, overall, the film seems to me to be the more complete work.

Worth reading, for sure: well worth watching if you get the chance.

Finally, as we've discussed film and surrealism extensively, here is the quite brilliantly restored version of the first ever surrealist film, "The Seashell and the Clergyman" by Antonin Artaud. Like "The L-Shaped Room", it influenced so much that followed (the influence on the Quay Brothers is remarkable). As it was a silent film, you can watch it with the sound turned down as the music is dire: