Why hello there! Aren't introductions awkward?!

Basically I am a contemporary jeweller based in Birmingham's Jewellery Quarter. Obviously I am so much more than this... I hate mushrooms, lemon flavour desserts, wasps and my feet. I love tea and biscuits and watching films that are so bad they cross over into genius. But that's not really important right now! What is important is Dr Grace.

Where it all started...

Wondering where it all started? Here's a bit of background for you. During my degree I became fascinated with old Victorian cures that blatantly didn't work. My particular favourite? 'Dr Sandens electric belt, a never failing cure for all weakness in men'. (Brilliant!) People actually bought these, convinced by the pseudo-medical talk on the poster.

If the Victorians could get away with inventing…

The Supercollider piece is progressing apace. I managed to cast the central torus element today: I got really fed-up cleaning it! Overall, I'm pretty pleased with this, though it still presents the problem of how I am going to get all the investment plaster out of the inside of the hollow…

"The essence of success" by Sienna Patti.

Sienna Patti of Sienna Gallery offered her "essence of success" during the Forging Communities Symposium. She challenged everyone in… I don't know why I keep tinkering with the resin idea.  I LOVE the look of glass...but I can't tell you how many times I get asked if my plique-a-jour pieces are resin.  So I purchased a buttload ( that's a metalsmithing term) of different kinds of…

On Friday, I was sent to the most annoying meeting I've ever been forced to go to. It was given by a moron, an idiot who thought that it was enough to pompously declaim his unvalidated, ill-researched opinions on things relating to "sustainability", yet was hypocritical enough to brag about his "frequent visits to Greece" and his "two weeks in the Maldives", presumably all involving flights. Well, it is nice he can afford these things by selling his services as an advisor on…

The difference between a goal and a wish? from Brigitte Martin's lecture during the "Success Panel" at Forging Communities

Powerful words from Brigitte Martin, a speaker with the "success panel" during…

Back to the Blog

Having now had a couple of weeks where a combination of loads of things on my plate and general late-autumn lethargy have conspired to prevent me from making any blog entries, I'm back to it after a week in which I saw an opera featuring a depressed singing egg and created a seriously dangerous structure.

Having seen the Call for Entries on Crafthaus for the "Hot…

When taking photos of objects or jewelry with shiny reflective surfaces, catching the right light may seem like a difficult challenge or just a matter of luck.

Shiny surfaces reflect light like a mirror, possibly creating excessive or unwanted highlights.  What is reflected could be anything in the room that surrounds the work.  What can be…

Just wanted to let everyone on crafthaus know that I've had work accepted in Art Jewelry III and in an upcoming (2012) Lark Book, Metal Clay Fusion. Wooohooo!

Forging Communities - Information, blogging and notes from An Intimate One Day Symposium for Networking and Information Forging Communities - An Intimate One-Day Symposium was an amazing success. Sponsored by the Metal Arts Guild of San Francisco in honor of it's…

EcoArts Awards - A Competition Opportunity for Everyone If you have ever wanted to promote ecology while expressing your artistic expression, here is an opportunity to weave both together.

All ecology-minded artists, artisans, and makers should submit their works to this upcoming competition.

Exhibition Opportunity: Hot Under the Collar

Hot Under the Collar: A Survey of Contemporary Necklaces

Choker, collar, lariat, torque, pendant, the necklace is one of the most diverse formats available to metalsmiths today. Whether cascading down the front, or draped down the back, the possibilities are nearly endless. The human torso provides us with one of our largest canvases, while still keeping body as site.

From comments on the classic strand…

"Translucent" featuring recycled school folders, will be featured in the upcoming Lark book entitled, "30-Minute Bracelets" by Marthe Le Van.  The book is set for release in mid 2012. 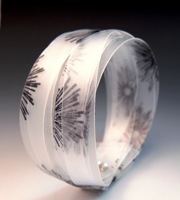 DO YOU OR SOMEONE YOU KNOW POSSESS MANY TALENTS?

DO YOU OR SOMEONE YOU KNOW POSSESS MANY TALENTS?…

I wanted to have this piece finished for Hallowe'en but things got in the way, so here is my Spoon Skull Cross, a bit of fun made from iron wire from a building site in Brighton, a rusted bolt, some flat ground tool steel from a derelict workshop, a silver souvenir teaspoon, silver, copper, rubies, sapphire, garnets and carnelian: As a bit of a precursor to an online exhibition I'm organising on Crafthaus about contemporary craft in Scotland, glass-artist Jeff Zimmer, an American who is representing Scotland at SOFA, has just posted images of the works he is exhibiting there. Hauntingly beautiful.