Begun in 2005 by metalsmith, Parker Brown, Crescent Moon Armoury is a small business dedicated to the continuing craft of historical armour smithing.  The majority of its work focuses on historical armour for the modern collectors and martial artists.  Each piece is made according to the specific measurements and needs of the individual client.  In a modern world that has forgotten the true meaning of "custom made", Crescent Moon Armoury strives to retain, preserve and advance the true craft and art of armoursmithing. 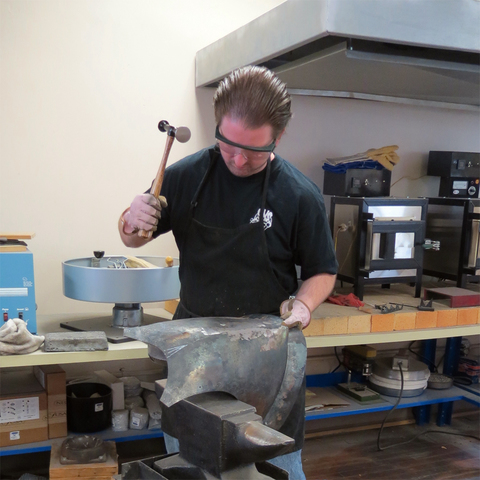 Hey everyone in Crafthaus land!  For those of you who don't know me, my name is Parker Brown.  I am originally from Denton, Texas. I attended the University of North Texas where I obtained a Master of Fine Arts degree in Metalsmithing/Jewelry and a Bachelor of Fine Arts degree in Art History and Metalworking/Jewelry. I currently live in Carbondale, Illinois where own and operate my own company (Crescent Moon Armoury) making armour, jewelry and anything else you can think of that's made of metal! I am also an active student of Western martial arts through the Association for Renaissance Martial Arts (ARMA). Oh yeah, and I'm also a Civil War reenactor (Union).  You can view my work at my website:
www.crescentmoonarmoury.net.

For the past several years, my primary professional activities have been directly related to the production of custom armour for practitioners of MARE (martial arts of Renaisssance Europe).  This is an international movement that has been gaining steady recognition in the martial arts world for its investigation of historical European fighting techniques as documented in original 14th, 15th and 16th century fighting manuals.  While a good portion of these techniques are unarmoured and unarmed in nature, most pertain to the use of swords, shield, staff weapons and, most importantly for me, the use of armour.

To get a really good idea of the nature of these martial artists, I direct your attention to a short video produced by the Association for Renaissance Martial Arts (ARMA):

Pretty intense, right?!  Well...it gets better!  Here's a video produced by Hammaborg, a martial arts group from Germany showing some of the details of armoured fighting:

Now, one of the things to keep in mind is that everything these people are using, the swords, the armour....nothing is just a costume.  This is not about fantasy, but is an academic examination of nearly forgotten skills.  Just as the fighting techniques have had to be re-learned, so have the skills used to produce the tools.  Historically, everything had to be made by hand....

The Medieval and Renaissance views on art and the craftsperson were quite different from our view today.  The modern definition of "art" tends to focus on the visual, but until the 17th century, art referred to any skill or mastery and was not differentiated from crafts and sciences.  A skilled swordsman (or swordswoman) was just as much an artist as a painter, sculptor or armourer.  The study and mastery of a skill was the defining element of what made an artist.

So, this blog is my own exploration of a modern artist who has chosen to pursue, in more ways than one, the true arts of Mars.....the martial arts.  I hope you'll join me and share your thoughts and questions.

If you will be renowned in the art, you’ll never be poor,  in any place.  This virtue is so glorious that,  if even once poverty would show you his cards,  then wealth will embrace you thanks to your art.”  - Maestro Filippo Vadi, Liber de Arte  Gladiatoria Dimicandi, c.1482 Let’s face it, most of us think we understand the realities of armour. In reality, there is a plethora of fallacious ideas regarding the function and form of this historical artform. Modern businesses produce lines of…Continue

Being a craftsperson/maker/artisan/artist is a rather unique profession. Many people today have limited experience in (truly) handmade objects and their interactions with us are often the first and only exposure to the craft world. For an armourer such as myself, that exposure is exponentially reduced by the specificity of my field. I am part of a sub-genre within a sub-genre. Explaining to people what I actually do is similar to Lord Helmet’s scene with Lonestar in “Spaceballs”.…Continue

With the conclusion of three conferences in two months in two states, the long awaited blog is back! To continue with the construction of the Kunst Schott von Hellingen Breastplate, we last left off with the individual plates ready for polishing, decoration and patination.The original breastplate features an engraving of Kunst Schott’s family coat of arms. However, while this engraving’s…Continue

This is the critical stage of the project where all temptation to play Minecraft must be resisted so that I can practice some ACTUAL craft skills. Yes, it’s neat that you can reconstruct Notre Dame cathedral in a virtual world, but it can’t be submitted to the SNAG Exhibition in Print, can it?So, onwards and upwards.With temptations managed, the next step of the cuirass is to construct…Continue

The plackart is a challenging piece of armour. Historically, plackarts formed a larger portion of a full cuirass. But with the German Transitional style (and later subsequent Maximillian style) the plackart’s role changed. Instead of being mounted in front of the breastplate like on the Milanese armour shown on the leftfrom ca. 1445, the von Hellingen cuirass used a smaller plackart…Continue

Armour can be functional art. It has the capacity to communicate beyond its intended form. Anyone who has taken a stroll in the New York Metropolitan Museum of Art’s Armour Collection or the Kretzschmar von Kienbusch Collection at the Philadelphia Museum of Art can attest to the shear visual power and elegance displayed by historical armour. And, one can argue, that we are only experiencing half of armour’s potential message. As art, the full experience of armour isn’t in the carefully…Continue

With the narrowing of the breastplate, it would be easy to panic and think that the whole piece is ruined and only hours of reworking would save it. But what would a German armourer in the late 15th century do? If the original armourer was trying to use influences from Italian craftsmen from the south, so should I. Italian craftsmen at this time were obsessed with the mathematical and geometric understanding developed by the Ancient Greek and Roman scholars. Its understanding was the basis of…Continue

Raising the breastplate is, by far, the most labor-intensive portion of the project. Each successive raising course tends to take up to about 2 hours. The temptation to rush must be resisted; precise movement of the metal is necessary to insure a proper fit. That said…..make sure you’ve got something really interesting to listen to while working. I’m currently listening to books on tape…Continue

You need to be a member of Crescent Moon Armoury to add comments!

Of course :-). I'm working on a blog right now that will address this very topic.

I was wondering if one of your future blogs could compare different versions of the same thing, such as helmets, spears, swords etc.? I came across an image of an intriguing helmet a few days ago and I'd be interested to hear more about symbolism and stylistic differences of historic work, and how pieces evolved over the centuries and why, to what advances in skill/tools or materials shaped the work made.

Thank you for your consideration, This is fascinating. It's lovely to see someone who is dedicated and serious about keeping skills and traditions of the past alive.